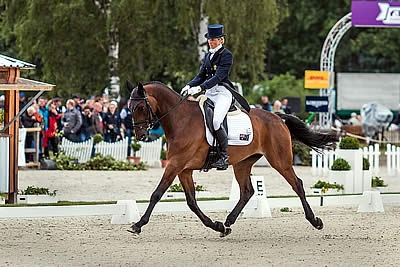 Lausanne (SUI), 13 June 2014 – Lucinda Fredericks (AUS), who has taken the lead after the Dressage phase at Luhmühlen, presented by DHL Paket, is hoping to make it third time lucky at Germany’s premier event, the fifth and penultimate leg of the FEI Classics™ 2013/2014.

In 2012, Fredericks finished second on Flying Finish and secured a place in the Australian team at the London Olympic Games. Last year, having suffered a slow start to the season due to a bad fall, she was not at full fitness but still managed to finish in 11th place.

“This time I’m going to crack on,” promised Fredericks, who retired Flying Finish early on the Cross Country at Badminton last month because he had temporarily banged a nerve. “It wasn’t as dramatic as it looked. He was fine five minutes later, which was frustrating.

“But perhaps it was a blessing in disguise,” she continued. “My horse feels good; we’ve had a good preparation for this event and I feel we’re due some luck. It would be a great boost for my team at home if we could do well.”

Fredericks, who won Burghley (2006), Badminton (2007) and Kentucky (2009) on her brilliant little mare Headley Britannia, was the only rider at Luhmühlen to break the 40-penalty barrier. She scored 38.7 on Flying Finish, a 12-year-old Holsteiner by Candillo which she bought in Germany, and leads the Olympic, World and European Champion Michael Jung (GER) by 2.8 penalties.

“It’s quite difficult to tell how well you’re doing on Flying Finish and I wasn’t quite sure I’d nailed it until after the test,” explained Fredericks. “He is always correct and steady, but every time I looked at the scoreboard I only seemed to be getting sevens, so I stuck my chest out and tried to move up a gear!”

Jung, who won Luhmühlen in 2009 on La Biosthetique Sam and in 2012 on Leopin FST, has a new CCI4* ride, his parents Joachim and Brigitte’s nine-year-old mare fischerRocana FST, eighth at Boekelo CCI3* (NED) last year.

Jung’s team mate Ingrid Klimke (GER) is in third place on the 10-year-old Horseware Hale Bob and the in-form Dutch rider Elaine Pen is fourth on Vira, winner of the Fontainebleau CIC3* in March.

Pen, a law student, led the Dressage on the first day with a score of 43.2. “I am feeling a little nervous because this is my first four-star,” she commented. “But my parents bought Vira as a foal 12 years ago, so we know each other well.”

It is not Pen’s first visit to Luhmühlen, however, as she finished 14th and was best Dutch rider at the FEI European Eventing Championships there in 2011.

Bettina Hoy (GER), whose appearance in the Luhmühlen arena last year was a dramatic one, when Lanfranco TSF repeatedly reared, had a more comfortable ride this time on the up-and-coming Designer 10. She is in fifth place on 43.3, just 0.2 ahead of FEI Classics™ leader William Fox-Pitt (GBR), sixth on Cool Mountain.

A total of 52 riders representing 12 nations came before the Ground Jury made up of Gill Rolton (AUS), President, Ernst Topp (GER) and Alain James (FRA).

The German event has enjoyed mainly fine weather so far, and the Cross Country going is described as “fast”, but the weather forecast is hinting at rain tomorrow. Lucinda Fredericks reports that the influential combination in the arena is “nicer” this time, but that Course Designer Mark Phillips (GBR) has still laid on an appropriately challenging track.

“There is a lot of turning to fences and turning afterwards and not always a lot of room to do it,” she said, “but I’m really looking forward to it.” 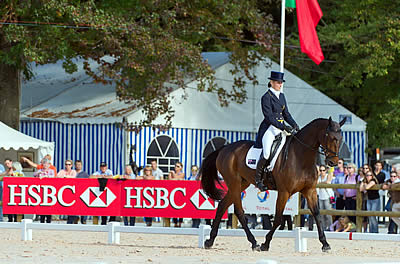 Lucinda Fredericks and Flying Finish go to the top of the class in the Dressage phase at Les Etoiles de Pau. (Photo: Trevor Holt/FEI).

Lausanne (SUI), 25 October 2013 – The first competition of the FEI Classics 2013/2014 season has been billed as a “battle of the giants” between Andrew Nicholson (NZL) and William Fox-Pitt (GBR), ranked first and second in the HSBC Rider Rankings, but Australia’s Lucinda Fredericks has swept ahead of the pair of them after the Dressage phase at Les Etoiles de Pau (FRA).

Fredericks, always a graceful and accomplished performer in this phase, was the only rider to break the 40-penalty barrier with a score of 39.2 on Flying Finish. However, the next six horses, three of them ridden by Fox-Pitt, are within five penalties of the leading score.

Flying Finish, a 13-year-old gelding by Candillo, is Fredericks’ top horse; they were second at Luhmühlen (GER) and members of the Australian Olympic team in 2012. This year, after a slow start to the season, due to Fredericks breaking a collarbone in March, they were 10th at Luhmühlen, but both horse and rider will have honed their fitness since then and are sure to be making a determined assault on Pierre Michelet’s Cross Country course tomorrow.

“Pierre is certainly testing us,” commented Fredericks, who is competing at Pau for the first time since 2002. “I’ve never ridden in the four-star here but the advantage of going later is that I’ll be able to watch. The downside is that I’ll have more time to get nervous.

“I think the first and last sections of the course will be a lot slower than the middle part [on the racecourse] and as my horse isn’t a thoroughbred, I can’t switch on the turbo, so I need to make a plan.”

Fredericks said the Dressage was “the easy bit. I enjoy it and I’m lucky because my horse has a good brain. So often as a horse gets more experienced they can blow up in the atmosphere, but he settles. I was a bit weak in my halts. I don’t know if it’s because I had practised them too much or not enough, but to do three bad halts and still be leading isn’t bad!”

Fox-Pitt, a three-time winner of the HSBC FEI Classics (in 2008, 2010 and 2012) and a winner at Pau in 2011 on Oslo, performed the remarkable feat of achieving three Dressage marks less than two penalties apart to lie second, third and equal fourth.

He is second on Seacookie TSF, runner-up at Kentucky (USA) in April, third on the 2010 World individual silver medalist Cool Mountain, and equal fourth on Neuf des Coeurs, third at Luhmühlen in June but retired early on the Cross Country at Burghley (GBR) last month.

Fox-Pitt was among many riders to welcome the new arena surface at Pau. “The horses seemed to go very nicely on it and now there’s a level playing field,” he said.

Of his three rides, he was particularly pleased with Cool Mountain, back in major competition for the first time since a member of Britain’s bronze medal team at the 2011 HSBC FEI European Eventing Championships in Luhmühlen.

Last year’s Pau winner Andrew Nicholson, the 2012/13 HSBC FEI Classics series champion, is also three-handed at Pau and is in close contention. He is in equal fourth with Fox-Pitt on his Kentucky winner, the black Spanish-bred Quimbo, and 10th on his Luhmuhlen winner, the big Irish-bred grey Mr Cruise Control. Viscount George, competing in his first CCI4*, is in 29th place on 51 penalties.

Nicholson has competed at Pau every year since the event started in 1990. “I love coming here,” he said. “It’s a very different competition to what we have in the UK; the site is much flatter and more compact, but the organisers do a great job here and it’s good to ride at different types of event.”

Lucy Wiegersma (GBR) is a regular visitor to Pau and returns with her top horse, Simon Porloe, seventh in 2011. They are currently in sixth place on 43.8, fractionally ahead of Phillip Dutton (USA) on his new ride Mr Medicott. The horse’s former rider, Frank Ostholt (GER), who won an Olympic team gold medal on him in 2008, is eighth on his 2011 European individual bronze medalist, Little Paint. Maxime Livio (Cathar de Gamel) is best of the home side in ninth place.

Two more former Pau CCI4* winners are in the field: the 2010 winner, Andreas Dibowski (GER, is 11th on FRH Fantasia and 35th on FRH Butts Leon; his compatriot Bettina Hoy (the winner in 2008) is much further down the order than usual at this stage, in equal 60th on Designer and 68th on Lanfranco TSF, but she will no doubt be relieved that she managed to contain Lanfranco’s notorious rebelliousness in this phase.

Fox-Pitt and Neuf des Coeurs will be first out on the Cross Country course tomorrow at 12.15pm CET. Watch all the Cross Country and Jumping action live on FEI TV www.feitv.org and keep up to date with the scores throughout on www.event-pau.fr.

Lausanne (SUI), 15 June 2012 – Lucinda Fredericks (AUS) produced a brilliant Dressage test on Flying Finish, a newcomer at CCI4* level, to head the field of 44 after the first day at Luhmühlen (GER), penultimate leg of the HSBC FEI Classics.

The Ground Jury of Jennie Loriston-Clarke (GBR), Christina Klingspor (SWE) and Christoph Hess (GER) awarded her the excellent score of 31.8, one of six to come in under the 40 barrier.

Fredericks has a one-penalty lead over the 2009 winner and current world and European champion Michael Jung (GER), best of the home side on CCI4* first-timer Leopin. Andrew Nicholson (NZL), the only rider who can overtake HSBC FEI Classics leader William Fox-Pitt at this stage, is in close contention in third place with Mr Cruise Control.

Andrew Hoy (AUS) on Rutherglen, last year’s winner Andreas Dibowski (GER), on FRH Butts Avedon, and Oliver Townend (GBR), who conjured a best ever CCI4* mark from new ride Armada, a horse that can be explosive in this phase, also scored sub-40 marks.

END_OF_DOCUMENT_TOKEN_TO_BE_REPLACED

Lucinda Fredericks is back this week to talk about horses’ holidays, and next season’s plans among other interesting topics. Tune in right here.

Buck Davidson reflects on a successful Easter weekend at The Fork as The Chronicle’s Sara Leiser brings us a full report from this influential event which is used as a final preparation for Rolex. Plus, Jim Wolf offers a tribute to Mrs. John B. (Nancy) Hannum. Listen in.