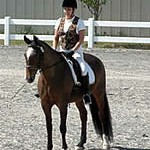 I have ridden all of my life and I am an absolute horse ‘fanatic’! I have ridden most disciplines. I am a member of USDF, USAE, USEF, USET, NFDA. I own a Lifetime USDF/USEF member horse, an American Warmblood out of a champion Budweiser Clydesdale sire – Clan Butter Glenord’s Glened, crossed with a racing TB-Appaloosa mare, Rocket to Antares (going back to Native Dancer), who I named Glenord’s Rocket Dancer or “Rocki” for her barn name.

Rocki is the most amazing horse – she will do anything and she is bomb-proof, even when she was a baby. I ride her mostly Dressage  and in English Pleasure and Equitation, and had also been working on Western Riding patterns, too, which I find is very similar to Dressage. But alas, I have a back issue now that only allows me to ride Dressage since it is more upright and uses core muscles more. She is my absolute love as I have had her now for almost since she was 2 1/2 (1993 mare) and she is still going strong.

I also owned a ‘companion horse’ for my mare, an ex-racehorse, Panimetro, who was a Thoroughbred rescue from the Virgin Islands, cared for by VICCTRE – Virgin Islands Community Cooperative Thoroughbred Retirement Effort. During a race, he suffered four major fractures in his left front ankle, an injury similar to Barbaro’s—the Kentucky Derby winner that was euthanized due to complications in the healing of his leg. “Metro” could have met the same sad fate, but was able to heal himself by lying down for long periods over a year and a half and allowing caretakers to attend to him. It does have some calcification in the fetlock, but it has healed enough for him to be a ‘horse’. Metro is on the cover, inside and as the December horse on the 2009 VICCTRE calendar. You’ll see him running around still like a racehorse, even with his injured left front leg! Sadly, Metro passed in the Fall of 2011. His leg finally gave away. He is buried in my back pasture. I cried so much over this…

I adopted ‘Metro’ from Habitat for Horses in March of 2007 when he was brought here from the Virgin Islands. He is such a character and loves people! He can still run around, buck and play and jumps over a water puddle in front of his paddock that can fill up when it rains a lot. Both horses have wonderful stalls with fans and open access to paddocks. Each had their own pasture that the paddock gate opens into, they get fed 3 times a day plus a lot of loving and TLC, so they are in “horse heaven”. 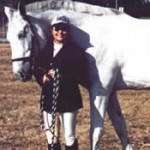 I also used to own an 18hh Holsteiner/Trakhener cross warmblood, J.R. Khan, who was trained to Third level Dressage by my trainer Kathy Daly who raised him from a foal from her stallion, Hurrikhan. Khan ‘taught me’ how to ride correctly by him knowing what to do from Kathy’s training. Sadly, I had to sell him a few years ago as my left shoulder was getting so bad (had a hemi-arthroplasty – shoulder replacement in 2008) that I couldn’t lift his legs to clean his feet, lift the saddle on his back & in general couldn’t take care of such a huge horse (too bad, too… my long legs fit perfectly on his sides).

I had an amazing 3 day experience on learning TTouch from Linda Tellington-Jones with Khan and he almost fell down asleep when were were working on him. Obviously, he loved it!

My Early Years and Horses

When in elementary school, I would walk over 3 miles every Tuesday after school to ride at a rental barn and I rode some of my friend’s horses, too. Finally, when I was 12, I got a horse of my own, a 14.3 1/2 hand buckskin part quarter horse, to learn to care for and retrain from being ‘wild’ and always wanting to run and jig, to a horse that would walk and canter just from a lift on the reins. My first saddle was a hard McClellan Army saddle that I hated, so I rode bareback most of the time until I finally got Western saddle, then an English saddle in my later teens.

I would do everything on my horse ‘Scottie’ (short for Great Scott – I renamed him from Apache) – riding for miles all around my family’s 30 acres in the woods of Jacksonville/Mandarin/Greenland/Bayard Florida area, going swimming bareback in the clear water of the ‘barrow pits’ that were dug to build I-95 next to our land; I would jump over 2 long pieces of skinny baseboard moulding spread out over the long side of 2 sawhorses that I set up as a jump; I would gallop over a 24+ ‘natural’ jump course I made of piled up tree limbs and logs, spanning a couple of miles, weaving in and out of trees, ducking under low-hanging branches, sliding down a steep embankment, and generally being a adventurous, horse-loving teenager.

I would run barrels and do pole bending and competed at a saddle club where I would ride to on Friday nights with a group of others. The saddle club was about 8-10 miles from my house. I would meet up with the other riders about 3 miles from my house & we would all ride together. Then, I would ride back home in the dark by myself – something you would never let a young girl do in today’s world…

I married my son Jason’s father, Mark Ellerbee in early 1970 while I was still a student at FSU. We moved to Nashville in the summer of 1970 and Mark got a job with the Oak Ridge Boys as their drummer and as backup vocalist. Jason was born at the end of 1970. After I had another son in 1973 (who died in 1987), I bought my own ¾ Arab/ ¼ Quarter Horse cross, 2 ½ year old stallion (originally named Major, but I changed it to Mecca) which I trained and showed locally. I showed my horse and other horses in Western Pleasure, Equitation and Hunt Seat, even placing 11th in the hunt seat class at the 1978 Appaloosa Nationals on a gorgeous black, blanket-spotted stallion I rode for a client. I also rode another gorgeous Palomino stallion in Western Pleasure and a young 16.2hh Appaloosa gelding in Western Pleasure and Hunt Seat.

In 1980 Mark and I divorced amicably and I moved back to my home in Jacksonville, FL (without Mecca – I sold him the year before I moved from Nashville since I had gone back to college to finish my degree). In 1983, I finally completed my college degree in Computer Information Systems (CIS). I didn’t ride during this time as I was always in class, studying, in the computer lab doing assignments, working part-time at the college as the Psychology department’s system analyst, and taking care of my small children when I was home. (I was lucky to have my mother take care of them when I wasn’t around.)

After I graduated and started working in my career, I occasionally rode friend’s horses off and on. I married my husband Jerry Rehkopf in 1992 and he made the ‘mistake’ one night of telling me that I should get a horse when I was ardently explaining to him how a horse canters on their leads. So, the search began and I finally got another horse – an ex-racehorse Quarter Horse named ‘Sunny’. I began riding him in Dressage and later in hunters and jumpers.

I sold him in 1995 just a couple of months after I got my mare which I named Glenord’s Rocket Dancer – Clan Butter Glenrod’s Glened x Rocket To Antares – ‘Rocki’ as a 2 ½ year old. Rocki’s sire (now deceased) was a champion Budweiser Clydesdale and her dam was a racing TB/Appaloosa, with her bloodline going back to Native Dancer, hence her name, Glenord’s Rocket Dancer, barn name of Rocki (spelled with an ‘i’ at the end so it’s female sounding, lol).

Claire Lee of what is now Haddenloch Farm (used to be Dexter Farm) first backed Rocki while I was healing from having 6 cracked ribs from a fall off of Sunny when I missed a tight turn to a jump (a perpendicular jump that was higher than I was used to and looked too late to next jump, so turned Sunny into the jump standard and fell onto the hard sand – ouch!) I had experienced a couple of other ‘falls’ on the ‘fast’ Sunny with associated injuries, so I had to promise my employer that I wouldn’t jump anymore, at least not competitively or in a clinic.

I got my American Warmblood mare to ride Dressage and English Pleasure (I did jump her in low Hunter classes after she was backed and after I had trained her to ground drive with me running behind her, but again, after the previous falls and injuries from Sunny, it was better that I ride Dressage instead), she has been the best horse I have ever had. She will do anything and she is bomb-proof even when she was a baby.

Rocki is still with me, still has her Dressage topline, still a wonderful horse,and still going strong (Clydesdales mature late – Rocki was actually lazy until she turned 10!). In 2004, I had the ‘ah-ha’ moment and learned how to ride ‘correctly’ , i.e., how to really ride Dressage and give with the arms/elbows, meld with the horse, inside leg to outside rein, half-halt, etc.

Boy was I excited when I finally ‘felt’ this for longer than just a few minutes! I called my trainer, Kathy Daly of KDEquine Training, and excitedly told her that I now knew what she had been trying to get across to me for the since she trained Rocki Dressage when Rocki was 3 1/2! So, instead of it taking me 45 minutes to warm myself up while confusing my horse by ‘hanging on the reins’ and not let him/her go forward INTO the reins, I can get on and have a great ride in 20 minutes, both my horse and warmed up almost immediately. Rocki really ‘thanks’ me now… all I have to do is to ‘think’ a movement and Rocki will comply… ahhhh… as was said, a true horse fanatic!

Work History Preparing Me for My Current Web Development Career

Before that, I was the Financial/Systems Analyst for the Investment Division for Barnett Trust Company. My degree is in Computer Information Systems in 1983. (Before I had my children, I was working on a degree in Photography and Design.) While working for the bank Technologies Division and the Trust Company, I wrote business plans/specifications for the bank’s business partners, provided design specs for applications, technical support, database conversion and project manager and Sr. business analyst for the division.

One thought on “Our History”