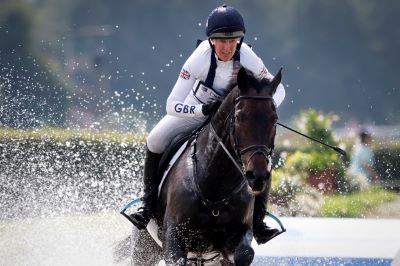 When asked what she thought of the cross-country course after completing her Dressage test with JL Dublin at the FEI Eventing European Championships 2021 in Avenches, Switzerland on Thursday, Great Britain’s Nicola Wilson described it as “positively terrifying!” But on a day of mixed fortunes for the British side who still managed to maintain the lead they established on the opening day, the pair rose from third to the very top of the Individual rankings after a spectacular run that further stretched the gap between her team and the defending champions from Germany.

And it was a very exciting afternoon for France. An unfortunate tip-up for Gwendolen Fer and Romantic Love in the water at fence 23 piled plenty of pressure on her compatriots who, however, rose gallantly to the challenge to hold on to bronze medal spot going into the final Jumping phase.

The British tally of 69.1 leaves them just over nine penalty points ahead of Germany, while on 96.8 the French are a good distance behind. Team Switzerland shot up from ninth to fourth while the Irish climbed from eleventh to fifth, and the stage is set for a sizzling conclusion to the 35th edition of these Championships, which are taking place against the odds during these troubling Covid times.

It’s only six short weeks since course designer, Great Britain’s Mike Etherington-Smith, started work on the track that embraces the beautiful racing venue at Avenches, but the horses, riders, and the enthusiastic crowd that turned up to see Europe’s best battle it out were treated to a great day of sport.

And the British maintained their supremacy despite a disappointing performance from the reigning World Championship partnership of Ros Canter and Allstar B. Sitting in Individual silver medal spot as the day began, the pair plummeted to 55th with two run-outs late in the course.

Piggy March and Brookfield Inocent produced one of just seven fault-free rounds to set things up for the British side.

“Everything is easy when you have a horse like him. The time was tight enough but he’s a real cruiser. What a horse and how lucky am I to have him!” she said.

And when Wilson followed suit, they were already looking very secure. Despite her earlier reservations, Wilson admitted that “the course rode beautifully, and my horse was very honest.” So when Kitty King and Vendredi Biats added just 0.8 time penalties to her dressage mark, then Canter’s additional 56 penalties could be dropped as they were comfortably in control.

German pathfinder Anna Siemer also had a great day, adding just 1.6 to her scoreline with FRH Butts Avondale. She was over the moon after her ride. “It was so much fun!” she said. “For her the dressage was done and now this is what we are here for! She’s like a pony; I know her for 10 years now, and from the moment she jumped her first cross-country fence, she was a cross-country machine!” said the rider who walked the track seven times in order to ensure she met with no surprises.

Andreas Dibowski was next out for the German side, adding 15.2 penalties to his scoreline with FRH Corrida. But Michael Jung pulled it back with a classic clear with the nine-year-old fischerWild Wave, demonstrating the skill that has earned the German superstar the title “The Terminator.”

“He’s a young horse but amazing, with a lot of talent in all three disciplines. Today he showed how light and easy he can gallop, and he has super endurance, he’s fast, and has a lot of scope for the bigger, tougher courses. Right now, all he needs is just more experience – to learn to be clever and to think. I’m really happy with him,” Jung said.

Now only the individual leader, Ingrid Klimke, was left to go for the German side, with a huge weight of expectation on her shoulders. If she can take the individual title she will be the first athlete in the long history of the FEI Eventing European Championships to do so with the same horse on three consecutive occasions. But 1.2 time penalties saw her lose her grip on pole position and she goes into the final phase just 0.5 penalties behind Wilson at the head of affairs.

“He was bold and brave, like he always is,” Klimke said of her beloved Bobby. “I had lots of time at the 7-minute mark, and then in the end there were two seconds (added) because I just couldn’t go any faster, especially in the turns. I had to take my time so I didn’t have a run-out. I had to be precise to the end and I felt it was the fastest I would like to go through the corners and the deeper ground. I thought I would make it, but unfortunately we didn’t – but he did a lovely job really and he finished full of himself!” she said.

Meanwhile, Jean Lou Bigot got the French off to a great start when delivering a fault-free run with Utrillo du Halage, but Gwendolen Fer’s fall left them looking very vulnerable. However, when Stanislas de Zuchowicz and the lovely grey Covadys de Triaval added only 14 time penalties to their score, the French situation began to stabilise. And he was thrilled with his result, produced under pressure.

“It was his first time at 4-Star level and my Chef d’Equipe told me I had to be clear, but my horse was fantastic! My job was to be careful about his balance because his jump is always fantastic, and his canter is always very good. We had a slip on the turn after fence 15 and that was a tricky moment, but I had the face of my coach in my head, and I knew we had to stay on our feet!” said the man from Fontainebleau who first rode for the French team in 2009.

And then Maxime Livio secured that bronze medal position definitively with a great round from Api du Libaire.

“The trainer told me to be quick enough to secure the bronze medal place but not to take any stupid risk like I might if I was only an individual rider, but the plan was not to take too big risk with that horse because he’s not really experienced. So I was quite comfortable with that. He (the horse) allowed me to take the straight route at 6/7, because he’s very straight. So I took that risk and he answered very well, but I just felt when I jumped the water when I came back on the race-track that his jumping was not as energetic at the beginning. So I decided okay, now we try to hold it together. He was a bit tired in the body but not in the mind. He was listening to me, looking at the fences, fully focused, and I’m very pleased because he fought with me to the very end for the French team. And also, his score is really good, so I am very happy!” Livio said.

It’s all so very close, and the result could go any which way on the exciting final day.