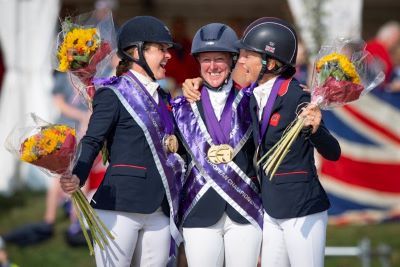 British riders have long had a phenomenal record in the sport of Eventing, and they proved untouchable once again when not only clinching the team title but taking all the individual medals at the FEI Eventing European Championships 2021 in Avenches, Switzerland.

In the lead from day one they held on tight, and when this result is added to double-gold at the FEI World Equestrian Games™ 2018 and the team title along with individual silver at this summer’s Tokyo 2020 Olympic Games, they clearly reign supreme in every sense.

It was a tough day for the defending champions from Germany as the dream of a seventh victory for the team and a third consecutive individual gold medal for Ingrid Klimke and SAP Hale Bob OLD didn’t come true, as they had to settle for silver. But in true sporting fashion the German team “elder,” Andreas Dibowski, said, “We won the silver, but we didn’t lose the gold. The Brits did an amazing job, and we just couldn’t beat them!”

Team Sweden stood on the third step of the podium.

Ros Canter and Allstar B were first of the British into the ring as the final showjumping phase got underway. Theirs was not a counting score for the team standings that left her side still out in front last night, but the pair who claimed double-gold at the FEI World Equestrian Games™ 2018 were back to their classy selves when producing a quality clear, and that proved a good omen for the rest of their team.

A total of 52 horse-and-athlete combinations made it through to this final test, with 13 nations still in the mix, and by the time it came down to the last ten riders the tension was palpable. As the action began, the Germans were just under 10 penalty points behind the British at the head of affairs, with France lying in bronze medal position another 18 points further adrift but with only three team members left after the elimination of Gwendolen Fer. So when Stanislas de Zuchowicz and Covadys de Triaval hit the first element of the double at fence nine and Jean Lou Bigot’s Utrillo du Halage left three fences on the floor, then French chances were slipping away.

Andreas Dibowski and FRH Corrida produced an opening clear for Germany before Anna Siemer and FRH Butts Avondale also fell victim to the first element of the triple combination. But Michael Jung steered fischerWild Wave home with nothing to add, and then only Klimke and SAP Hale Bob OLD were left to go.

However, it was only an individual medal Klimke was chasing by the time she took her turn, because as Dibowski said later, the British were just too good for the rest. Team member Kitty King’s Vendredi Biats hit the second fence, but Piggy March’s Brookfield Inocent was foot-perfect. And when Nicola Wilson’s JL Dublin went clear, she not only finalised the British tally at 73.1 for the winning team score, but she also had individual gold in her grasp while, lying fourth as the action began, March had the silver and British individual Sarah Bullimore had the bronze. It was a staggering result.

“I’m back in the team for first time in ten years and it’s great to be with the girls!” Forsberg said. “I’ve been really happy with the team spirit, and I want to thank the organisers very much for putting on this show.” And that was echoed by everyone else at the end of this extraordinary event that was put together so successfully in a few short months.

At the post-competition press conference, Germany’s Ingrid Klimke said with a laugh, “I have one thing to say to the Brits – they stole our trainer!” referring to Britain’s Eventing High Performance coach Chris Bartle, who helped her country to many successes in previous years. “But I’m very happy for them; they did a wonderful job!” she added.

Her compatriot, the effusive Anna Meier, was thrilled to earn her first medal at Senior Championship level. “I feel like I’m always in a team with my horse, but to be in a team with these guys is wonderful; they’ve won millions of medals between them but this is my first!” she said, looking around at Dibowski, Klimke, and Jung.

Bullimore described her 10-year-old gelding Corouet as “just a freak of nature! He’s phenomenal in all phases; he could do pure show jumping and pure dressage; he’s unique,” she said. “He has a huge attitude in a small package, he knows how cool he is, and he’s been fantastic all week,” she added. Her individual bronze was an especially precious result because she bred the horse and also competed his dam at the FEI European Championships in Blair Castle (GBR) in 2015.

March, team gold medallist at the FEI World Equestrian Games in 2018 and team silver medallist at the last FEI European Eventing Championships two years ago, described her individual silver medal winning ride Brookfield Inocent as “definitely one of the best I’ve ever ridden – in all three phases he couldn’t have done any more!” And she added, “Personally, I think that if we’re ahead of Ingrid Klimke and Micky Jung then that’s a medal in itself, wherever we’d finish! This has just been a fabulous week!”

Meanwhile, newly crowned individual European champion Wilson reflected on the enormity of it all with her trademark modesty. “This has been very very special, being with this fantastic group of girls who all get along really well. It’s been fun all the way and the horses have been phenomenal.

“It’s a first championship for Dublin; he missed a bit of time when I injured my neck (two years ago) and then Covid came long, but now I’m so proud for my owners. I was delighted with his dressage; it just felt very solid and good and then he stormed around the cross-country and produced a beautiful round in the show jumping. How lovely it is to have had him since he was a young horse and to build that lovely partnership and trust between us,” she said with quiet pride, adding, “Thank you to Switzerland for putting on these Championships!”

Everyone expressed their gratitude to the Organising Committee headed up by Jean-Pierre Kratzer, President of the Institut Equestre National d’Avenches, where this week’s event has taken place. A total of 21,000 spectators came through the gates of the fabulous venue, including over 10,000 on cross-country day.

“I built this place 20 years ago for racing, and to expand our business we then built a training centre for 150 horses. Last year during Covid, we were asked to help riders in preparation for Tokyo and we took the opportunity to plan for the future and help develop Eventing here,” he explained.

“When we got the opportunity to organise these Championships I talked with Mike Etherington-Smith in July about how to make it the best, and he asked if he could work with Martin Plewa. It was one opportunity for a lot of people and we took it and put it together in a few weeks with good team spirit. So I’m delighted to see all the teams happy and hear them say they want to come back; that’s the best thank you we could get!”