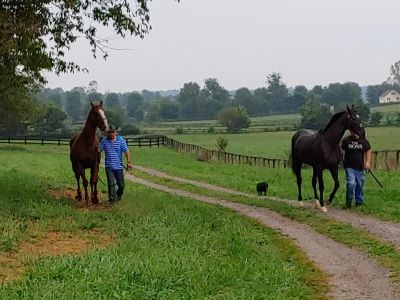 A Richard Baltas trainee and owned in partnership, Next Shares (Archarcharch – Two Dot Slew, Evansville Slew) retires after seven seasons with a record of seven wins from 49 starts and earnings of $1.891,971.

A multiple graded stakes winner, Next Shares also captured the 2018 GR1 Shadwell Turf Mile at Keeneland, the GR2 San Gabriel Stakes at Santa Anita, and the GR2 Seabiscuit at Del Mar in 2019.

Bordonaro (Memo – Miss Excitment, Rajab), comes to Old Friends through the United Pegasus Foundation in Tehachapi, CA. A William Spawr trainee, the now 20-year-old gelding won the 2006 GR1 Ancient Breeders’ Cup Stakes at Oak Tree and is a two-time winner of the GR3 Count Fleet Sprint Handicap (2006 and 2007) at Oaklawn Park. He retired with 10 wins from 20 starts and earnings of $938,128.

“We’re so thrilled to have both of these wonderful athletes,” said Old Friends founder and president Michael Blowen. “Richard Baltus, who entered Next Shares in the Old Friends Stakes because it guaranteed his retirement, and Bill Spawr, who trusted us with Amazombie, are two very special old friends.”

The son of Hard Spun, now 7, retired from racing in August of this year following a fourth-place effort in the Birdstone Stakes at Saratoga. At that time, he was sent to owner Centennial Farms’ Middleburg, VA facility to unwind.

He retired after five seasons on the track with six wins from 29 starts and lifetime earnings of $811,577.

A fan favorite thanks to his thrilling late-running style, Rocketry truly came into his own as a 4-year-old under conditioner Jimmy Jerkens. He captured the 2018 Temperence Hill Invitational Stakes at Belmont Park by crushing a 98-year-old track record for 1 5/8 miles held by Man o’ War, and, later that year, he earned his first graded stakes victory in the GR2 Marathon Stakes at Churchill Downs, again setting a new track record for the 1 ¾ miles.

In his 6-year-old campaign Rocketry added a third track record to his resume, this time going 1 5/8 miles in 2:42.57 at Keeneland, and picked up another graded victory in the GR2 Thoroughbred Aftercare Alliance Stakes.

“Just like the movie character, Rocketry could not have lived up to his nickname of ‘Rocky’ any better,” said Don Little, Jr., President of Centennial Farms. “He consistently campaigned in stakes carrying the Centennial flag with honor every time he set foot on the track. He was sound throughout his career while breaking three track records over a distance of ground. Being involved with a horse like this was truly a joy, thrill, and one that will be cherished by all the partners involved,” Little continued. “While he will be missed on the oval, we look forward to him showing off to visitors at Old Friends.”

“Who doesn’t love Rocketry?” said Old Friends founder and President Michael Blowen. “We’re very fortunate that Centennial Farms trusts us to care for their great marathoner. Thanks to Don Little, Jr. and Jimmy Jerkins for allowing us to showcase him to his many fans.”