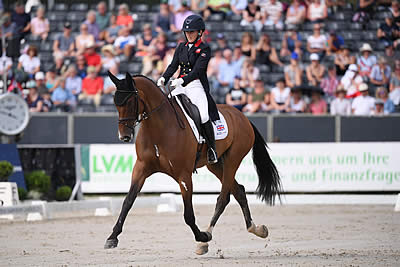 Belgium leads the team standings at this early stage, with Britain’s Laura Collett holding the individual top spot after the first day of Dressage at the Longines FEI Eventing European Championships Luhmühlen 2019.

Laura Collett (30) competing as an individual for Great Britain, produced some stunning work to take the lead at the end of the first day of Dressage, but it looks as though the door has been left open for a potential new order.

The graceful Collett, a neat rider known for her prowess in this phase, scored 25.5 on the German-bred 10-year-old London 52, a runner-up at Boekelo CCI4*-L last year and winner of the Chatsworth CCI4*-S this year, but only one of the three judges placed her first.

“He’s still a bit green and shy,” explained a delighted Collett of London 52, who made only small errors in the second flying-change and with a misstep in the canter work. “He saw the grandstand and was a little overwhelmed. He’s never been in a situation like this before, but he listened to me and kept his head.

“He knows all the moves and trusts me so much. If I keep riding and hold his hand, he’s all right. I’m obviously delighted with his score and it’s exciting for the future.”

Both the French army rider, a member of the 2016 Olympic gold medal team, and Rüder are reliably elegant in the Dressage arena and the pair is in joint second place on 25.8 penalties.

“It was a super dressage test with lots of highlights,” commented Rüder. “Colani was very relaxed, with good half-passes and the extended canter was just brilliant. It’s wonderful to see how much he improves from test to test. He’s a very strong character and you have to respect him – then he’ll do anything to please.”

The Belgian pair is in equal fourth place on 28.8 penalties which gives the nation, in search of qualification for the Tokyo 2020 Olympic Games, a boost in first place in the team competition at this stage.

Pippa Funnell (GBR), who won the European title at Luhmühlen 20 years ago, was a late call up to the team on Monday and is taking the pathfinder role on Majas Hope, currently 17th individually on 35.4. Second to go, Piggy French (GBR) and Quarrycrest Echo, members of the winning team at the FEI World Equestrian Games™ Tryon (USA) last year, are in seventh place on 29.8.

“This is no dressage competition,” pointed out French. “I’ve walked the cross-country course once and my first impression is that it’s a proper championship course. You have to think really hard about which lines you choose. It’s a quick track with decent waters.”

Follow the action on FEI TV and with live results on www.rechenstelle.de.