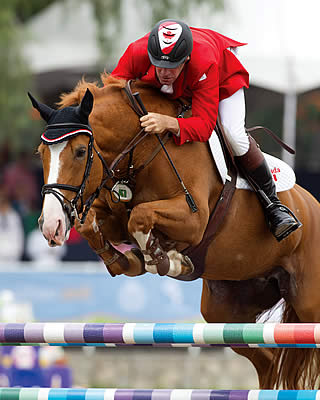 October 10, 2013 – Schomberg, Ontario – A group of owners committed to Canadian show jumping sport have acquired Showgirl for Yann Candele of Caledon, ON.

“I’ve always been impressed with Yann’s riding and watching him in Barcelona confirmed that he’s a world-class competitor; we need people like him on the team,” said Lamaze, 45, of Schomberg, ON.  “When I approached this group of people about helping me to support Yann, they all said ‘yes’ without hesitation.  It is extraordinary to see everyone coming together, and I thank them all for joining me.  We hope that together, Yann and Showgirl will be able to do great things for Canada.”

“Our primary sponsorship commitments are to Eric and Tiffany Foster, but Yann is a terrific rider and a dear friend, and we are delighted to be part of the group supporting him with the purchase of this outstanding horse,” said Andy Ziegler of Artisan Farms.

Margie Gayford of Sharon, ON, first campaigned Showgirl for then owner Wingberry Farms of King City, ON, before the mare found her way to Canadian Olympian Jonathan Asselin of Calgary, AB, in 2011.  Together, Showgirl and Asselin were Canada’s top placed combination at the 2011 Pan American Games in Guadalajara, Mexico, and this year won the $140,000 1.60m Cenovus Energy Derby Classic at the Spruce Meadows “North American” tournament.  The pair most recently represented Canada in the €1,500,000 Furusiyya Nations’ Cup Final at CSIO5* Barcelona, Spain, where the team placed sixth overall among 18 countries vying for the inaugural title.

“We love Showgirl and we’re very happy that she’s going to a great team,” said Asselin who owns Attaché Stables with his wife, Nancy Southern.  “It’s a tribute to Eric that he’s supplying another rider with a top mount, and we wish everyone involved a hearty best of luck and congratulations on the purchase.  We want the best for her, and we’re very proud that we’ll see Showgirl continue to compete for Canada.”

While the ownership group’s primary goal is to support Candele with an international calibre mount, the purchase also strengthens Candele’s prospects of representing Canada at the 2014 FEI World Equestrian Games in Normandy, France.

“It is very exciting,” said Candele, 42, the reigning three-time Canadian Show Jumping Champion.  “I want to thank everyone for their support and for giving me this opportunity.  We’re very pleased that the owners are coming together to try to put the best team possible together for Canada at the World Championships next summer.”

A native of Normandy, Candele noted, “Competing at the World Championships would be a special moment because I am from there, and also because the group of owners would be able to see their dream come true.  It would be doubly enjoyable if we get there, for both reasons.  There is still a lot of work to be done, and we’re excited to be working together towards such a major event.”

Candele is Head Trainer of Wingberry Farms, overseeing the training of all Wingberry Farms horses and clients.  Candele’s own mounts are stabled at Mill Creek Stables in Cambridge, ON, where he also maintains his own horse sales business.  Candele previously worked for Lamaze’s Torrey Pines Stable from 1999 through 2007.

Candele first made his senior Nations’ Cup debut in 2001 and competed at the 2004 World Cup Final in Milan, Italy, for his native France.  Since gaining his Canadian citizenship, Candele has ridden for Canada in eight Nations’ Cup competitions in addition to being a member of Canada’s fifth placed team at the 2010 FEI World Equestrian Games.  He was also the traveling alternate for the 2012 London Olympic Games and represented Canada in CSIO5* Barcelona, Spain, held from September 26 to 29, 2013.

September 23, 2012 – Palgrave, Ontario – Having dominated the CSI2* Canadian Show Jumping Tournament, Yann Candele of Caledon, ON, rode away with the Caledon Cup on Sunday, September 23.  Candele won all three phases of competition comprising the Caledon Cup at the Caledon Equestrian Park in Palgrave, ON, recently named the official equestrian venue of the Toronto 2015 Pan/Parapan American Games.

Mac Cone, 60, of King City, ON, opened the jump-off with a clear performance in a time of 38.93 seconds riding Unanimous, an 11-year-old Dutch Warmblood gelding owned by The Unanimous Group and Southern Ways.

END_OF_DOCUMENT_TOKEN_TO_BE_REPLACED

Palgrave, Ontario – With three chances at victory, Yann Candele of Caledon, ON, was the odds on favourite to win the $35,000 Caledon Cup Phase 2 on Saturday, September 22, at the CSI2* Canadian Show Jumping Tournament (CSJT).  The five-day international show jumping competition runs through September 23 at the Caledon Equestrian Park in Palgrave, ON, recently named the official equestrian venue of the Toronto 2015 Pan/Parapan American Games.

The starting field for the second phase of competition in the Caledon Cup was narrowed down to 25 contenders for Saturday’s $35,000 Caledon Cup Phase 2, presented by Aviva Elite/Peel Maryborough.  Of those, 10 jumped clear over the track set by two-time Olympic course designer Leopoldo Palacios to advance to the jump-off, including Candele with all three of his entered mounts.

END_OF_DOCUMENT_TOKEN_TO_BE_REPLACED

A total of 28 horses entered the $15,000 Caledon Cup Phase 1, presented by Aviva Elite/Peel Maryborough.  Seven successfully cleared the first round track set by two-time Olympic course designer Leopoldo Palacios of Venezuela to advance to the jump-off.

Candele already held the lead riding Game Ready, having posted a clear round in a time of 35.13 seconds, when he returned with his second jump-off mount, Carlotta Singular La Magnifica.  The traveling alternates for the 2012 London Olympics, Candele and Carlotta Singular La Magnifica proved their capabilities by posting a clear round in time of 33.89 seconds to capture the win.  Stablemate Game Ready settled for second while Candele’s third mount, Ariana, stopped the clock in 79.01 to incur one time fault for exceeding the 79-second time allowed.  Candele and Ariana tied for eighth place with Ainsley Vince of Burlington, ON, who also crossed the timers in 79.01 riding Darling.  All three of Candele’s horses are owned by Susan Grange of Cheltenham, ON.

END_OF_DOCUMENT_TOKEN_TO_BE_REPLACED

Orangeville, Ontario – Yann Candele of Caledon, ON, claimed his second grand prix victory in a row at the inaugural Orangeville Show Jumping Tournaments held August 15-19 at the Orangeville Agricultural Society (OAS) Event Centre in Orangeville, ON.

As the traveling alternates for the Canadian Olympic Show Jumping Team at the 2012 London Olympic Games, Candele and Carlotta Singular la Magnifica were making their first competitive appearance since arriving back on Canadian soil.  The long trip home didn’t hamper their performance.  The pair jumped to the top of the starting field of 22 horses to take the win in the $50,000 Grand Prix, presented by NationWide Auto Warranty.

END_OF_DOCUMENT_TOKEN_TO_BE_REPLACED

Fresh off his return from the 2012 London Olympics, where he was the traveling alternate for the Canadian Olympic Team for Show Jumping, Candele was one of only three riders to post a clear round over the track set by two-time Olympic course designer Leopoldo Palacios of Venezuela, who also arrived direct from London.  Candele advanced to the jump-off with two mounts, Game Ready and Carlotta Singular la Magnifica, both owned by Susan Grange.

First to return to the ring was 2008 Olympic team silver medalist Mac Cone of King, ON, riding Amor Van de Rostal, a 12-year-old bay Belgium Warmblood gelding owned by Chadburn Holdings Inc.  The pair laid down a clear round, stopping the clock in 46.08 seconds and putting the pressure on those still to come.

END_OF_DOCUMENT_TOKEN_TO_BE_REPLACED

Wellington, FL – February 2, 2012 – The $32,000 WEF Challenge Cup Round 4 had an imposing field of 84 entries today, but it was Yann Candele (CAN) and Carlotta Singular La Magnifica, owned by Susan Grange, who were able to beat the strong contenders for victory. Today’s grand prix was the highlight class in the International Arena at the FTI Consulting Winter Equestrian Festival (FTI WEF). Beezie Madden (USA) and Cortes C, owned by Abigail Wexner finished second, while Laura Kraut (USA) and Happy Hill Farm’s Cedric were third.

Week four of the FTI WEF runs February 1-5, and is sponsored by Adequan. The Budweiser Clydesdales will be making two appearances at the FTI WEF this week. The first will be before the $80,000 Adequan Grand Prix, CSI 2* on Saturday, February 4, and again on Sunday, February 5 before the Suncast 1.50m Championship Jumper Classic. The 2012 FTI Winter Equestrian Festival has 12 weeks of competition that conclude on April 1, 2012, and they will be awarding more than $6 million in prize money through the circuit.

END_OF_DOCUMENT_TOKEN_TO_BE_REPLACED

Lexington, KY – August 29, 2011 – Canada’s Yann Candele has taken over the lead in the 2011 Hagyard Challenge Series after earning strong finishes with four mounts over the last two weeks during the Bluegrass Festival Horse Show and the KHJA Horse Show. Two weeks ago, Candele took home the winning prize aboard Azzaro during the $25,000 Hagyard Lexington Classic, and also placed fifth and sixth. During the KHJA Horse Show, Candle placed sixth, ninth, and eleventh in the prestigious class to earn valuable points towards the $45,000 Leading Rider Bonus.

McLain Ward, who claimed the first and second place honors in the $25,000 Hagyard Lexington Classic during the Kentucky Summer Horse Show aboard Pjotter Van De Zonnehoeve and Vocas, currently holds the second place position. Young rider Christina Kelly placed third in Thursday’s event aboard Creata Van Ten Biesen and her steady results throughout the series have now earned her enough points to be tied for third place in the standings with Ian Millar. During the Kentucky Spring Horse Show, Millar showed Instyle and Star Power to fourth and fifth place finishes, respectively, during both of the $30,000 Hagyard Lexington Classics.

The Hagyard Challenge Series features seven show jumping events at the Kentucky Horse Park in Lexington. The rider who accumulates the most points in the series will receive a $45,000 Leading Rider Award, presented after the $50,000 World Cup Qualifier held on September 23, 2011, during the Kentucky National Horse Show.

END_OF_DOCUMENT_TOKEN_TO_BE_REPLACED

Lexington, KY – August 19, 2011 – Another incredible crowd turned out at the Rolex Stadium tonight at the Kentucky Horse Park; this time the spectators watched riders compete for the top prize during the $25,000 Hagyard Lexington Classic at the Bluegrass Festival Horse Show. Six horse and rider combinations progressed to the jump-off with Yann Candele riding three of them, and eventually leading the victory gallop with Azzaro after they laid down the fastest clear effort over the short course. Margie Engle was just a hair off of Candele’s time. She and Lord Spezi earned the second place finish after completing a fault free effort.

Tonight’s class was the fifth of seven grand prix events that make up the Hagyard Challenge Series, sponsored by Hagyard Medical Institute and presented by Pfizer Animal Health. Following the final event in the series, a cash prize of $45,000 will be awarded to the rider accumulating the most points throughout the series for the Leading Rider Bonus.

The horse and rider combinations were tested over a challenging course, designed by Allen Rheinheimer, which included fourteen obstacles. The course featured an oxer-oxer-vertical triple combination, a triple bar that was just six short strides before a vertical-vertical double combination, and a liverpool, as well as several, single verticals. Riders also had to keep the pace in order to complete the course, which spread covered the entire arena, within the tight time allowed of 90 seconds. The complicated oxer-oxer-vertical triple combination posed difficulties for horses and riders alike, causing several to gain faults because of the single long stride between each fence. Out of the 44 entries, only six horse and rider combinations went clean and Yann Candele would have the ride aboard three of the six horses to advance to the jump-off.

END_OF_DOCUMENT_TOKEN_TO_BE_REPLACED

Round 1 of the $30,000 WEF Challenge Cup was held in the International Arena over a track set by course designer Anthony D’Ambrosio of Red Hook, NY. Out of 26 original entries, seven made it to the jump-off in the Table IIa class. A distinguished list of horses and riders qualified for today’s jump-off in the WEF Challenge Cup and four were able to go double clear, each besting the leading time until the final competitor completed the fastest round.