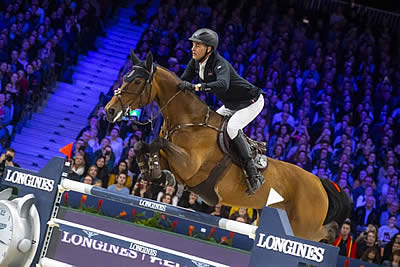 On an afternoon of Dutch delight, Marc Houtzager and the amazing mare Sterrehof’s Dante threw down an extraordinary performance to snatch victory in the twelfth leg of the Longines FEI Jumping World Cup™ 2019/2020 Western European League series on home ground in Amsterdam (NED).

It was at the expense of compatriot Harrie Smolders who, third to go in the nine-horse jump-off, looked to have set an unbeatable target-time when breaking the beam in 35.03 seconds with the 11-year-old gelding Monaco. But, second-last into the ring, Houtzager’s 12-year-old mare seemed to have grown wings as she flew around the course to shave almost a full second off that when crossing the line in 34.05 seconds. Belgian riders Pieter Clemens and Niels Bruynseels lined up third and fourth.

“I never rode such a fast jump-off at this level in my life! The mare was fantastic today!” — Marc Houtzager (NED)

There were four home-side contenders in the second-round decider and Jeroen Dubbeldam, Sydney 2000 Olympic individual gold medallist and holder of double World and European titles, kicked off with a careful clear in 40.12 seconds with Oak Grove’s Carlyle. Clemens shaved almost five full seconds off that, however, finishing with a flyer over the last with the 11-year-old Quintini when next to go.

Then Smolders reset the target with a superb round in 35.03, and it looked like he wasn’t going to be shaken from the top of the tree until Houtzager took his turn. Foot to the floor from the outset, Houtzager’s line to the double, three fences from home, saw him up on the clock and the mare’s relentless gallop over the penultimate oxer and down the long run to the last saw them race through the finish in an incredible 34.05 seconds. Not even the super-fast last-to-go Belgian partnership of Bruynseels and Gancia de Muze could challenge that, crossing the line in 35.33.

“Sometimes the jump-off goes as you planned and sometimes not, but today was my day!” Houtzager added. “I saw Harrie and Maikel go, so I knew I had to give everything and it was a bit of a risk taking that turn into the double, but my mare jumped fantastic and she’s really careful, so I didn’t have to worry – to win by one second, that’s a lot! And Harrie said if somebody has to beat me today, I hope it’s you – and it was!” said Houtzager, team silver medallist at the London 2012 Olympic Games and a linchpin of the Dutch Jumping team for many years.

Smolders said the competition was exceptional and praised course designer Louis Konickx for his great work throughout the week at Jumping Amsterdam. “The course was brilliant, and the biggest thing of this afternoon was to see the crowd enjoying themselves and to feel the atmosphere – it brings us to another level. Our horses are doing things we didn’t even know they could do; that’s what makes this sport and this event amazing!” he said.

Talking about his winning ride, Sterrehof’s Dante, Houtzager explained that his wife, Austrian international Julia Houtzager-Kayser, competed the mare at 2-Star level before he took over the ride a year ago. “And she has stepped up to 5-Star level so easily,” he said. “We’ve taken her slowly, but I knew that today was the day I could take a risk with her. She’s so fast, even in the air; she’s always going forward and she gallops so fast!” he said.

Although this result has boosted the Dutchman to eighth place on the Western European League table, he doesn’t intend taking Sterrehof’s Dante to the Longines 2020 Final in Las Vegas in April. “Tokyo (2020 Olympic Games) is an option for her along with Calimero, so we won’t do the Final this time around,” Houtzager explained.

His third-place finish means Belgium’s Clemens has now boosted his points tally and, lying 23rd on the Western European League table with a total of 30 points, he’s not far outside the top-18 who will make the cut. “For me it would be a dream to ride at the World Cup Final, so tomorrow I will sit down and make a plan because there are two more qualifiers left, so we will see,” he said.

He won’t be the only one eagerly chasing down those longed-for points in Bordeaux (FRA) on 8 February and at the last leg in Gothenburg (SWE) on 23 February.

London (GBR), 22 December 2012 – Marc Houtzager brought his year to the perfect close when winning the seventh leg of the Rolex FEI World Cup Jumping 2012/2013 Western European League series at London, Olympia (GBR) today.  Riding Sterrehof’s Tamino, the Dutchman went fourth in the eight-horse jump-off and clinched it with the smoothest of rides.

Runner-up spot went to Malin Baryard-Johnsson with H&M Tornesch, and the Swedish star has now moved to within sight of a qualifying spot for the series Final on her home turf in Gothenburg, Sweden next April. Peter Charles slotted into third, and it was a particularly creditable performance from the man who helped clinch team gold for Great Britain at the London 2012 Olympic Games. Partnering a new ride, the 10 year old French-bred mare Murka’s Odie de Frevent, Charles is only just back in action after undergoing surgery in September.

Houtzager said, “It looks like London is the place to be for me!  I won team silver at the Olympic Games and now I’ve had my first World Cup win here.  It’s a great win for me, and it is especially great because it is the last show of the year!”