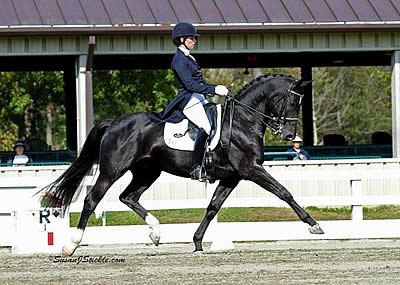 Sammis to Travel to U.K. to Train with Kyra Kyrklund

Wellington, FL – June 26, 2014 – Lauren Sammis and Lombard V, a 10-year-old Danish Warmblood gelding (Lobster-Heidi, Diplomat) owned by Hope Greenfield, were on top of their game at the recent Centerline Events at HITS II in Saugerties, NY. The pair scored a 70.658 and a 71.579 percent for first place finishes in the Intermediaire II on both June 14 and 15, and earned the FEI High Score Award on June 14.

“I was very, very pleased with him on Saturday and it was a really solid test,” Sammis said. “The horse is going really well. He’s getting 8s on gaits.”

Sammis and Lombard V, along with another Grand Prix horse, Whitman, will depart for the United Kingdom on July 2 to spend two months training with Kyra Kyrklund in West Sussex. Whitman is an 11-year-old Dutch Warmblood gelding (Rhodiumr-Camora, Saluut) owned by Jane Suwalsky, and Sammis has had the ride on him for about two months.

Sammis said her main goal while there is to train and then to compete in some smaller shows.

“I plan to get the horses going and get as much consistent help as I can,” she said. “I’ve never been in that situation where I have help every day.”

She plans to return in time to compete in Saugerties, NY, in September and hopes to have the scores to participate at Dressage at Devon.

Sammis is looking to friends for assistance in subsidizing her European expedition, and will update supporters with exclusive blogs and photos to include them in her adventures as she travels to learn from one of the greats. If you are interested in helping, contact her at lcsammis@gmail.com.

Meanwhile, she is packing and preparing for her two months with Kyrklund.

To learn more about Lauren Sammis and Cinco, go to www.sammissales.com.

Wellington, FL (January 18, 2012) – International Dressage rider and Pan Am Gold Medalist Lauren Sammis is well known for wearing her helmet in the Grand Prix ring, and thanks to that important life decision Sammis put on her “role model” hat recently and took part in the Riders4Helmets Safety Symposium in Wellington. Sammis, who competes Sagacious HF, a KWPN gelding owned by Al Guden and Hyperion Farm, sat on a panel at the Riders4Helmets Symposium entitled “We Are All Role Models.”

In addition to being a role model for wearing her helmet while riding and competing, Sammis is also a role model for young dressage riders aspiring to have a successful dressage career. On the same weekend that Sammis appeared on the Riders4Helmet panel, she also took part in the USDF/USEF Young Rider Graduate Program.

“It was a very busy weekend but I had a great time,” Sammis said. “Both programs were very important and it was an honor to be asked to participate. I am in Wellington for the winter dressage season competing Sagacious in the Grand Prix’s, but anytime I can do something that puts me in a position where I am helping other riders, I am glad to do it.”

END_OF_DOCUMENT_TOKEN_TO_BE_REPLACED

Saugerties, NY (July 13, 2010) – Pan Am Gold Medalist Lauren Sammis, who is back in the Grand Prix show ring with Al Guden’s Sagacious HF, spent time with young dressage riders recently when she served as a judge at Lendon Gray’s Youth Dressage Festival at Hits-on-the-Hudson in Saugerties, New York. Sammis, who worked for Gray as a working student starting in her early years, was thrilled to take part in Gray’s annual Youth Dressage Festival, an event that attracts young riders from around the world.

“I judged the 7-9 year olds and the 16-17 year olds and they were unbelievably cute and adorable,” Sammis said. “This is exactly what you want your children to be involved with because they were braiding their own horses and ponies, taking written exams and taking part in an equitation class series.”