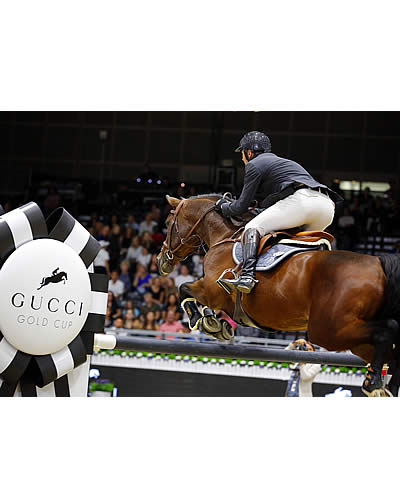 Los Angeles, CA. October 3, 2015 – Saturday night at the Longines Masters of Los Angeles was the epitome of glamour, prestige, and fun with top level show jumping and entertainment at the Los Angeles Convention Center. The evening featured two renowned classes: the Gucci Gold Cup for the first time at the American leg of the series and a signature event in the Longines Masters, the Charity Pro-Am Style & Competition.

The inaugural Gucci Gold Cup at the Longines Masters of Los Angeles showcased the power and glamour of the sport as 36 of the world’s best riders jumped the course designed by Luc Musette. Already a favorite at the Hong Kong leg of the Longines Masters series, the Gucci Gold Cup brings the best of show jumping to the American audience. World Number 1 Scott Brash, U.S. Number 1 Beezie Madden, and many more joined Longines Masters of Hong Kong Gucci Gold Cup champion John Whitaker in the ring. After a winning round of 12 competitors, French rider Patrice Delaveau and Carinjo HDC claimed top prize with a time of with 35.83 seconds, with McLain Ward and HH Carlos Z in very close second with a time of 35.85 seconds, followed by Edwina Tops-Alexander and Lintea Tequila in third in 36.30 seconds.

The Charity Pro-Am Style & Competition was a unique team class composed of one professional rider and one amateur rider, riding for charity. Each of the eight teams dressed up in costumes of their choice as they rode to a music selection complimenting their chosen theme. The team with the best style was decided by a celebrity jury composed of James Bond girl Denise Richards, actress Perrey Reeves from Entourage, and KTLA anchor Sam Rubin. Each team was judged on the number of penalties over the fences, the team’s style and elegance, as well as the horse’s style.

Kaley Cuoco and teammate Tracy Wade were crowned the Charity Pro-Am Style & Competition winners dressed as Luke Skywalker and Darth Vader to benefit Ride On. Jennifer Gates and Jack Towell embodied Wizard of Oz characters for Thrive Animal Rescue, and Hannah Selleck and Jane Richard Philips were Alice in Wonderland and the Queen of Hearts on behalf of Longines and Just World International.

Earlier on Saturday, Patrice Delaveau won his first class of the day, the $34,000 Prix Emirates CSI5*. Only two riders out of a starting field of 21 managed to leave all the rails up to qualify for the jump off. Delaveau, riding 11-year-old Lacrimoso 3 HDC and Lauren Hough, on 11-year-old Cornet 39, were the two riders to jump a second time.

The Longines Masters of Los Angeles will conclude on Sunday afternoon with the much-anticipated Longines Grand Prix. John Whitaker from Great Britain has journeyed to Los Angeles for the first time since 1984 in an attempt to claim the first ever Masters Grand Slam Super Bonus. 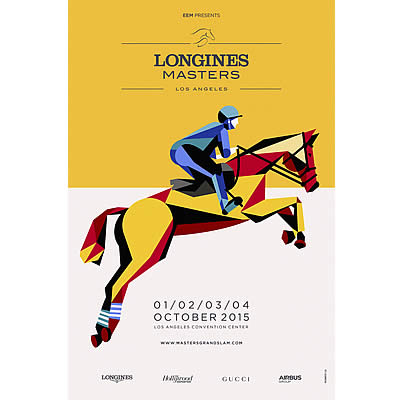 Los Angeles, CA (July 21, 2015) – EEM, creator and organizer of the of the Longines Masters series, is pleased to announce that Gucci is continuing its commitment to equestrian sports with the debut of the Gucci Gold Cup in America. The competition will take place during the Longines Masters of Los Angeles event, held at the Los Angeles Convention Center on October 1-4, 2015.

Since the inception of the Masters in 2009, Gucci has been an invaluable partner in establishing one of the world’s most prestigious indoor equestrian events. Gucci continued to integrate itself within the Masters Series with the creation of the Gucci Gold Cup in Paris, Hong Kong, and now the United States. The Gucci Gold Cup will be held on the Saturday evening of the Longines Masters of Los Angeles, and bring the glamour and sophistication of the brand to the arena as the world’s best riders battle to win the coveted Gucci Trophy.

Gucci’s equestrian culture runs deep and can be most exemplified with the legendary horse bit symbols and saddle detailing weaved into its collections that trace its heritage back to the founding of the brand in 1921.

EEM’s CEO Christophe Ameeuw stated, “We are unbelievably grateful that our relationship with Gucci continues to develop across the Master Series on all three continents. The Saturday evening at the Masters with the Gucci Gold Cup promises a night of great sport and glamour.”

ABOUT GUCCI
Founded in Florence in 1921, Gucci is one of the world’s leading luxury fashion brands, with a renowned reputation for creativity, innovation and Italian craftsmanship.

Gucci is part of the Kering Group, a world leader in apparel and accessories that owns a portfolio of powerful luxury and sport and lifestyle brands.

The world’s best riders and horses will compete for one million dollars in prize money at each leg of the series. In addition, any rider who consecutively wins the Longines Grand Prix in Paris, Hong Kong and Los Angeles will be rewarded with one million euros Master Grand Slam Bonus. For two successive victories, the rider will be awarded €500,000, and winners of two non-successive victories within a series of three Longines Grand Prix will receive a €250,000 bonus.

EEM’s objective is to create emblematic events that showcase the magic of show jumping and put equestrian sport in the international spotlight. These events are broadcast in more than 120 countries and reach almost 550 million viewers. Every edition of the Masters is a monumental event that brings together sports enthusiasts, amateurs, celebrities and corporate decision-makers from around the world, who come to enjoy a unique experience, boasting exceptional sport, entertainment, glamour, gastronomy and contemporary art.