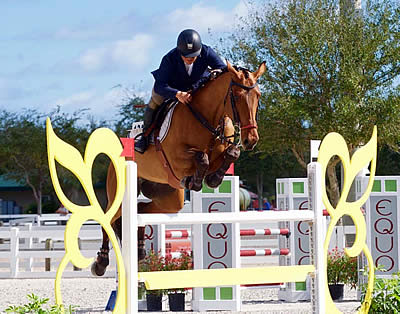 Competition kicked off Wednesday in the multiple all-weather arenas at Jim Brandon with Rings 1 & 2 hosting everything from .65m to the Grand Prix, and ran through Friday and continued all USEF Level 2 Jumpers and Outreach. Ecuador’s Diego Vivero and Bijoux came out on top in the first $15,000 1.40m Grand Prix on Friday. A speedy, precise round with the talented Bijoux gave him a double clear and the winning jump off time of 31.003, while Week 1’s Grand Prix winner, Luis Fernando Larrazabal, piloted G&C Close Up to second on a 32.563. Vivero also placed third with his second mount, Reglisse Top, with a 34.578.

For Saturday’s 1.45m Grand Prix, presented by Dave Corbin and Jim Corbin of Illustrated Properties, the jumps were set a bit higher, and the course a little more technical. At midday, international Grand Prix rider Debbie Stephens and Everest held the lead with an exceptionally quick jump off time of 29.311. Fast as the pair was, they weren’t fast enough as another highly decorated rider, Amy Momrow, romped around the course with Baldino du’ Rovet, riding a double clear effort and slipping in just under Stephens’ time with a 27.525.

“I’ve been riding Baldino for four years, and coming to show on the Palm Beach Series was a nice break from my schedule of training,” said Momrow. “It was a very inviting course, excellent footing, and a super warm up. The quiet, relaxed atmosphere allowed me to focus on myself, which doesn’t happen often! Planning to show him here more this winter here and continue to build our partnership at the Grand Prix level.”

Stephens, whose ride was impressive on its own, was also awarded the EQUO Stylish Rider Award for her efficient round and elegant turn out with Everest. Presented by the sport and fashion equestrian line EQUO, Stephens was presented with a “Champagne and Horses” show shirt and a bottle of Vueve Cliquot by The Ridge’s founder, Palm Beach Series organizer and US Olympian Nona Garson. Of her mount, Everest, Stephens noted that she purchased Everest as a 7-year-old, and felt it was time to move him to the next level.

“It was fantastic to take him to a new venue, one that he is not as accustomed to, and I was really pleased with him. The facility is beautiful, and the course designer did a fabulous job. Everest is 18.1 hands, and because of his size we are constantly improving his agility and speed. I selected to leave out strides in the first and last lines, and while he can be slower in the air because he is so careful, I think we made an important step towards a successful Grand Prix career. Overall I’m thrilled with his performance and our experience here at the Palm Beach Series.”

During Friday’s Grand Prix, another international show jumper, Christine McCrea, chose the Palm Beach Series’ laid back atmosphere to fine tune her relationship with Jarcobond Van Den Oude Elk, a scopey dark bay owned by Candy Tribble that is a new and promising ride for McCrea. “I didn’t have very high expectations for Jarcobond as this is only our second time in the show ring,” she stated. “But I was very happy that the course was technical enough to present a challenge but also simple enough that we could build a rapport. Our jump off was conservative as this is a new horse for me, but it was great to ride in a $15,000 1.40m class where I could develop more of a partnership with him and even win some prize money.”

McCrea’s experience epitomizes the vision of The Ridge in presenting the Palm Beach Series and its related events. “All of our shows are targeted to riders such as Christine,” said Garson. “We want to offer a world class show jumping experience to act as a catalyst for riders and horses to develop their skills. As a stepping stone towards bigger classes and more electric atmospheres, our goal is to act as a catalyst for growth and development in the sport.”

The 2017 Palm Beach Series includes 13 weeks of hunter, jumper, dressage, and equitation competition, including a diverse offering of divisions and classes, National, International, and Pony USHJA Hunter Derbies, weekly 1.40-1.45m Grand Prix classes, USEF Equitation Tuesdays hosted at The Ridge at Wellington, and the exceptional venues and all natural surfaces on the Turf Tour. Hosted at the Jim Brandon Equestrian Center, just two miles from Wellington’s center, the Palm Beach Series will also offer seasonal stabling packages on the show grounds, which include a covered arena, multiple all weather arenas, permanent barns, and a variety of amenities for horses and riders.

Up and coming jumper stars ruled the International Arena this past week. In the $25,000 Spring 6 Grand Prix, 13-year-old Victoria Colvin of Loxahatchee, FL, scored her first grand prix win with Monsieur Reverdy, owned by Rivers Edge. She beat a field of 32 entries with a double clear finish in 36.755 seconds. Quentin Judge (24) and HH Sandor were second in 37.143 seconds, while 16-year-old Christina Kelly and Camirage, owned by Diamond Edge Farm, were third in 37.261 seconds.