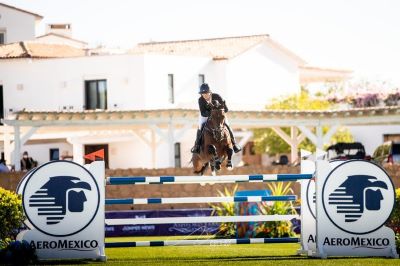 “It makes me cautiously optimistic that it’s going to go better,” said Ashlee Bond (ISR) of how a disappointing day on Friday mentally led her to redemption in the Major League Show Jumping GNP Seguros CSI5* Grand Prix on Saturday.

She and Donatello 141 (10yo WESTF gelding by Diarado x Lamoureux I) were untouchable in the five-horse jump-off over courses built by Guilherme Jorge (BRA) on the stunning grass field at Otomí Residencial Hípico in San Miguel de Allende, MEX. No one watching would have guessed that the fierce mount is the same horse Bond trail rides at home and lets her daughter sit on.

“He’s such a good boy; I don’t really know what else to say,” she concluded. “He makes my job really easy. He comes out every day, he tries his hardest, and the bigger the jumps, the better!”

Completing the podium, Ireland’s Paul O’Shea and Chancelloress (12yo HANN mare by Chacco-Blue x Balou du Rouet) couldn’t catch Bond and settled in second for owners Niall Carey and Trelawny Farm. Bliss Heers blazed a path in the first round as the leading clear to finish third with Antidote de Mars (11yo SF stallion by Diamant de Semilly x Jarnac).