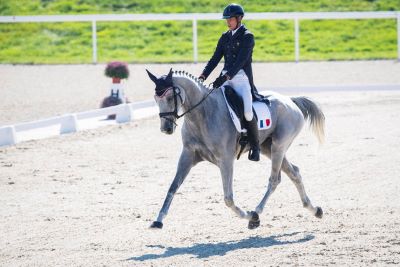 Great Britain maintained the lead in the Dressage phase, but there will only be a hair’s breadth between them and the defending team champions from Germany when the cross-country phase of the FEI Eventing European Championships 2021 gets underway.

A margin of 4.9 penalty points is all that separates the two sides as the best horse-and-athlete combinations from all across Europe continue to battle it out for the prestigious team and individual medals at these 35th bi-annual Championships.

Germany’s Ingrid Klimke took another step towards an historic first-ever three-in-a-row individual title with the same horse, when steering the brilliant SAP Hale Bob OLD into pole position in the Dressage arena. But Great Britain’s Ros Canter and Allstar B, who took double-gold at the FEI World Equestrian Games two years ago, came dangerously close to toppling them when third-last to go.

Scoring 20.6, Canter lies just 0.4 behind Klimke when the horses set out to take on the challenging cross-country track designed by Great Britain’s Mike Etherington-Smith, which consists of 40 jumping efforts and 32 fences over a distance of 5,678 metres that must be covered in 10 minutes 7 seconds to avoid time penalties.

And lying third, only 0.3 further behind, is Canter’s team-mate and first-day Dressage leader Nicola Wilson with JL Dublin, while a super test from Maxime Livio and his attractive 11-year-old grey gelding Api du Libraire leaves him individually fourth and secured third place for Team France.

Klimke was always expected to reshuffle the order with her 17-year-old gelding whose career record includes Olympic team silver, individual World Championship bronze, and four European gold medals, the last two of the latter clinched on home ground in Luhmuehlen two years ago. He certainly didn’t disappoint again, but Bobby was full of beans before starting his test.

“Maybe he thought we were in cross-country already! I didn’t warm up for long because he knows all the movements and I thought it would be good if he was a bit fresh, because the ground is a bit deep (in the arena), but I didn’t know he was that fresh! I should have cantered a few more rounds outside!

“I had to take an extra loop to calm him down, but the moment I entered the ring, I knew exactly that he knows his job inside out and I could really enjoy it and I could ride very precisely from point to point. After so many years now, it is really a pleasure to ride through the test knowing he is absolutely focused and there is so much trust between us,” she pointed out.

She says the cross-country course reminds her of the track at Wiesbaden in Germany, “which feels like seven minutes in a jump-off – you can’t breathe very much!” But Bobby is a past-master over fences. “The good thing is that he has a very handy canter for the turns, and he doesn’t mind the ground,” she explained.

Canter gave the German star a real run for her money when third-last to go. Albie, as her 16-year-old horse is known to his friends, didn’t make it entirely easy for her though because, as she explained, “He was his usual lazy self! I wanted everyone to clap and cheer as we came in and he pricked his ears for about half a second but then he went ahhh… he’s always listening to me, and in a way it’s a benefit, but I was possibly sweating more than he was!” she said.

“But honestly, he’s just the most rideable horse I’ve ever had in a dressage test. He doesn’t change, regardless of the atmosphere or anything else; he just lets me ride for every mark, and that’s where his heart shines really and always has done. Time and again, he does mistake-free tests. It’s a lot of pressure coming out on him again (after their World Championship success), but I want to try and enjoy every minute because I know I haven’t got many left with him,” she added.

While both Klimke and Canter’s horses are super-experienced, Livio’s fourth-place ride with Api du Libaire was all the more impressive because it’s this pair’s first Championship together, and you’d never have guessed it.

“We knew since the beginning this horse’s talent for the three phases is really nice; he can fight with the best horses in the world. This is his first Championship so it’s good to be where we are today and it’s a good score for the team, but it’s a three-day event also so we take it day by day,” said the 34-year-old Frenchman.

He described his handsome and characterful gelding as “a strange horse; he’s like a kid but not a bad kid, just someone who is pleased to be here and wants to see everything! My job is to show him a lot, and I’m pleased because he was totally connected to me, and when he is like that, he is a super student because he tries all the time,” he added.

Meanwhile, looking ahead to the cross-country test, Canter said, “It’s a really challenging course in terms of the full circles we do and all the accuracy questions and the difference in surfaces which will affect horse’s balance. We’ll need to prepare for every fence, riding and planning the bits in between. Albie gets very wound up at the start but he’s a wise old man, so I’ll keep his warm-up limited and keep his energy and adrenaline for the course.”

Klimke said the most important thing will be to maintain the horse’s rhythm and “not lose any stride, just keep a wonderful flow,” all very possible perhaps when you are partnering a creature of the calibre of SAP Hale Bob OLD who she affectionately calls “the professor.”

Livio agreed. “The rider who can be fluent in their riding will do the best. This course is a good test of the ability of the rider to be fluent – if we manage to do that it will go well,” he said.

Team France lies only 7.6 penalty points behind the Germans who currently hold silver medal spot. But the French will need to be on the button because fantastic tests from Harald Ambros (Lexikon 2), Robert Mandl (Sacre-Coeur), and Lea Siegl (van Helsing P) moved Austria up into fourth, less than two points behind.

The Dutch team is in fifth place, Italy in sixth, Sweden in seventh, and Belgium in eighth, while the hosts from Switzerland lie ninth. Spain, Ireland, Russia, and Czech Republic fill the last four places.