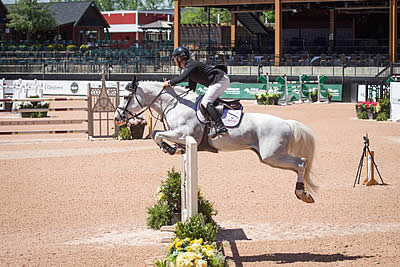 Tryon, NC – May 2, 2019 – Sharn Wordley (NZL) and Gatsby took home the win in Thursday’s $36,000 Horseware Ireland Welcome Stake CSI 2* to kick off Tryon Spring 1 competition, clearing the short-course in 38.28 seconds with his own Gatsby. Fernando Cardenas Jr. (COL) and his own Quincy Car, a 2004 Oldenburg stallion (Galiani Car x Amour Parfait), put in a 40.653-second jump-off round to land in second place, while Alberto Michan (ISR) and El Pacho, a 2009 Dutch Warmblood gelding (Cardento 933 x Goodtimes) owned by Pablo Mejia Villa, claimed third place on a time of 40.736 seconds.

Course designer Manuel Esparza (MEX) had 32 pairs test the first-round track, with 12 entries returning to challenge the jump-off course. Wordley and the 2004 Irish Sport Horse stallion (Simba x Cruise On) took a very technical approach to shaving off time in the second round, he explained.

“The jump-off was quick. I chose a different tactic than most: I went inside a jump they didn’t go inside, and went around a jump they did go inside. I think it was more a technical thing, and that’s where I made up the time,” he said.

“It was a nicely-built course,” Wordley elaborated, “and good for the first day. It rode well. I got caught out [of the first round] on my first horse, Rye Val De Mai, because I was just a second over the time. I didn’t realize the time was as tight as it was.”

His winning mount, Wordley revealed, took the win on his first show back after a break. “Gatsby hasn’t shown in two months, but he jumped well. He’s fifteen years old. He’ll jump the $72,000 St. Luke’s Hospital Grand Prix Saturday night, and I usually use him for 2* Grands Prix and 1.50m classes. He’s a great horse and he wins a lot,” Wordley concluded. “He’ll be showing here a lot.”