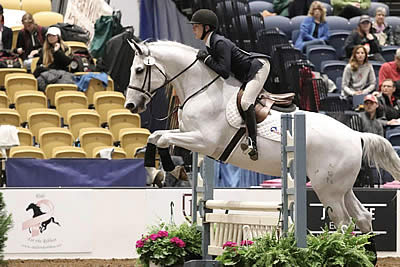 The first class of the day was Individual Open Equitation Over Fences, sponsored by Cazenovia College Equestrian Team and Cazenovia College, Adam Edgar earned the national championship with a score of 86. Fortune was shining on Edgar, a sophomore at Savannah College of Art and Design, when he drew Lucky, owned by Centenary University. The pair christened the Expo Center arena as the first round of the day.

“I was very excited because Mikey (Andrade) and I are always head to head,” said Edgar, 19, a sophomore from Leesburg, Virginia. “I’ve been able to watch him for two years now and he rides him beautifully. I tried to mirror that and just give it a soft ride. He (Lucky) was great, he couldn’t have been any better.”

Edgar explained that being the most physically and mentally prepared they could be helped offset any first-to-go jitters. The team works out with a personal trainer and does yoga. “I didn’t even think twice,” he said. “I just went in and picked up a canter and tried to do the best I could.”

Andrade, a senior from Poughquag, New York, stepped up to win the Open Hunter Seat Equitation championship on the flat. His Centenary University teammate, Madison Myro, a freshman from Las Vegas, Nevada, earned the nod from the judges for the second-place prize. Edgar nabbed the third spot.

Andrade who majored in Equestrian Business Management qualified for the USEF/Cacchione Cup for the first time and hopes to perform well for his final season in the IHSA.

“There is no better way to teach yourself to ride than to ride lots of different horses and every single day,” said Andrade about the experience in the IHSA. “Catch-riding – it’s so beneficial for being adaptable. You’re not going to be great if you only ride one type. Of course, you have to be able to ride anything you can sit on to do well.”

Andrade has a job after graduation with top equitation trainer Andre Dignelli at the renowned Heritage Farm.

“We could not be happier to have two really hardworking riders in such a competitive class,” said co-coach of the Centenary University team, Michael Dowling. “First and second in amazing company! We are really grateful for the horses that were provided, which were outstanding. Both of our riders had outstanding draws that were fancy enough to win any competition.  It’s a great last note for Mikey as he graduates and Madison is a very up-and-coming first-year student.

At the IHSA Regional show for Zone 1, Region 3 (Western Mass) March 30, hosted by Smith College at Stoneleigh Burnham School, the Novice Hunter Seat qualified riders faced tough competition with 13 attempting to progress to Zones by achieving the first or second-place prize. Seven riders were called back for the final heat, and four were tested from the seven.

Then, the judge asked for two riders to switch horses and do the test again. Those two riders were both sophomores: Alexandra Ferris, 20, from Ipswich, Massachusetts, a member of the University of Massachusetts Amherst team, and Elizabeth Sams from Atlanta, Georgia, a Mount Holyoke College team member. They finished their class and were awarded first and second, respectively.

“We’ve always gone head to head in first or second,” Ferris said of Sams. “She’s been the one that has made me the better rider. She has made me work harder.”

The following Monday, the judge called the regional president, Tara Lowary, to tell her that she had made an error in the placings. When she called the final two for the work off, she had been testing for the second and third-place ribbons. Her first place had not needed another test. But she placed that rider in third place erroneously.

When the zone chair, C. J. Law and the national steward, Sherri West, were consulted, it was decided that there was precedent for making the change official. With Sara Hearn of Mount Holyoke claiming the first-place spot, Ferris moved to second and Sams was bumped to third. This meant Sams would no longer qualify for Zones.

“I’d already had a spot over fences and Libby worked just as hard as I did and she deserves just as much as I did, to go to zones and have a chance at nationals. It was worth it to give her a spot and we’ve become good friends.”

In an incredible act of sportsmanship, Ferris declined her place in Novice Hunter Seat Equitation on the flat. She said that she thought Sams deserved to compete at Zones. With Ferris’ qualifying for Novice over fences, she gave her Novice flat qualification to Sams, her competitor from another team.

“I did it because it was the right thing to do,” Ferris said. “She had been working just as hard as I have all year.”

“It was out of the goodness of her heart because we were competitors. We were very friendly to each other, but we were competitors,” Sams said. “She gave me something that I had worked so hard for. And for her to give me that opportunity – it was awesome. And now I have a great friendship.”