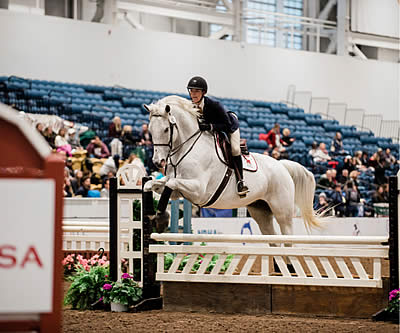 Syracuse, N.Y. — May 3, 2019 — The 2019 Intercollegiate Horse Shows Association (IHSA) National Championships resumed for the second day of action at the Expo Center at the New York State Fairgrounds in Syracuse. The first two phases of the coveted USEF/Cacchione Cup, the Equitation Over Fences and the Equitation on the Flat, took place. The Western riders and horses also began competition, featuring AQHA Team Open Reining and Individual Open Western Horsemanship. All teams participated in the colorful Parade of Teams.

ADAM EDGAR CURRENTLY IN THE LEAD OF USEF/CACCHIONE CUP FIRST TWO PHASES
In the USEF/Cacchione Cup Equitation Over Fences, Adam Edgar, a sophomore from Lee, Virginia and member of the Savannah College of Art and Design (SCAD) team, produced the leading round aboard Vinny, owned by Miami University of Ohio that earned a score of 85. On the Flat, the judges awarded him an 86 aboard Sydney, owned by Penn State University.

“That horse (Sydney) was a little bit slimmer and more my type,” Edgar said. “He really made me feel beautiful. He was a great one – super comfortable; super sweet. All the horses have been so well behaved; they are such good horses.”

Edgar shared that no matter the outcome of the USEF/Cacchione Cup, they’ve worked hard and he feels that he has made his coaches proud.

“It’s taken a while for me to finally be very confident in my riding,” Edgar said. “That’s really been a game changer and it’s nice to go home at the end of the day and not be beating myself up. I feel great.”

Ashley Henry, head coach of the SCAD team, describes Edgar as a person who can go in the ring with multiple things to focus on.

“Honestly, he’s one of the best students that I’ve had that works well under pressure,” she said. “He’s been a very busy bee. A lot of people get distracted with too much information, but he absorbs it and keeps working.”

This year, the IHSA celebrates 40 years of Western divisions. A presentation began when a team of six Belgian draft horses led by the Morrisville State College lapped the arena for a demonstration with Bob Cacchione aboard. Then, AQHA judging professional Joe Carter and Ohio State coach Ollie Griffith joined Cacchione to speak to the audience about the longtime relationship with the AQHA. Concluding the presentation, Cacchione presented a plaque to AQHA representatives.

UNIVERSITY OF FINDLAY TAKES A WIN FOR THE TEAM IN AQHA TEAM OPEN REINING
Morgan Knerr, a sophomore at University of Findlay from Plain City, Ohio and the 2018 NRHA Open Reining Champion, nabbed the first notch to help her team defend their 2018 national championship. She drew one of eight horses provided by the University of Findlay, Louise.

“She was a sweetheart,” Knerr said about Louise. “I rode her at Semis a few weeks ago and so she was really great. I loved her. The pattern went really well. I was really happy with it.”

The University of Findlay Head Coach Spencer Zimmerman was pleased with the outcome. “This venue does not look anything like our arena,” he said. “It’s a little bit more modern, a little bit bigger. We’ve just been soaking it up. They’re all excited to show here.

Anna Woolsey, a 19-year-old freshman from Northeastern Oklahoma A&M College, earned the reserve championship. She and her parents, Morgan and Chris, made the drive from Oklahoma to Syracuse and spent some time at Niagara Falls before Nationals.

“I had a little bit of tough luck in the Individual Reining class but I pulled it together for the team reining and our team made it,” she said about qualifying to get to Nationals. According to Woolsey it is the first time Northeastern Oklahoma A&M College has qualified for Nationals.

KENDALL WOELLMER WINS INDIVIDUAL OPEN WESTERN HORSEMANSHIP AND TEAM NOVICE OVER FENCES
Kendall Woellmer is a junior from West Texas A&M University who competes in both the Western and hunter seat division and excels. Thursday, Woellmer won the championship of the Team Novice Equitation. She traded in her breeches and boots for chaps and a cowboy hat and bested the field of national qualifiers in the Individual Open Western Horsemanship. She was accompanied by West Texas A&M Assistant Coach Selena Finn. Head Coach Amanda Love cheered at home as the team Facetimed with her. Love is expecting her first child within the month.

“I drew Chester and his nickname is Ham Sandwich (provided by SUNY Oswego),” she said. “He was perfect – a dream come true.”