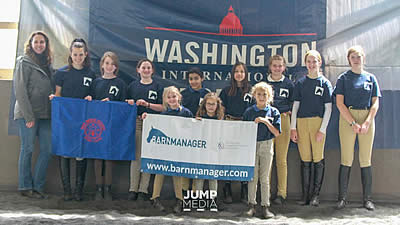 Washington, D.C. – Some of the riders of the Iron Bridge Hounds Pony Club were treated to Washington International Horse Show’s (WIHS) “Fundamentals of Equitation with Stacia Klein Madden” Barn Night Clinic, presented by BarnManager, at Fine Idea Farm in Mt. Airy, MD on Saturday, April 27. Iron Bridge Hounds Pony Club won the Group Video Contest, sponsored by BarnManager, during the ever-popular Barn Night at the 60th Anniversary WIHS in October 2018 and earned participation in the clinic as their prize.

Eleven enthusiastic riders between the ages of seven and 16 rode in five groups with an emphasis on perfecting the basics of their riding in order to find success.

“The basics are the same, whether you’re teaching somebody to be on a horse for the first time, or whether you’re trying to win a national championship,” said clinician Madden, one of the top equitation trainers in North America. “It’s just levels and degrees of what you’re trying to fine tune. There’s so much you’re trying to teach at this level, so it’s a lot of fun to be able to get to the bottom of what some of these kids’ problems have been and see if you can scratch the surface of improving them in the hour that you have working with them.

“It’s really refreshing to teach at this level because you can see the kids get it so fast,” continued Madden. “They’re like sponges; they take in the knowledge so fast. When you’re at a grass-roots level, you can see the improvement so much faster.”

Returning to the basics even inspired Madden to bring the philosophy back to her students at Beacon Hill Show Stables based in Colts Neck, NJ. She said, “Teaching is a real passion of mine. Having taught these levels might inspire me to go back to some very simple things with my students at home when I teach this week.”

Pony power was in full force with Iron Bridge Hounds Pony Club as most of the participating mounts were pint-sized. For each participant, Madden emphasized the importance of making a plan in both training and competition and taking time to get each piece correct. She stressed that each rider needs to be the “pilot” of their horse with prompt transitions, deep corners, and straight lines.

“My horse tends to take off after the jumps, so going straight and halting after the jumps really helped me and help her to stay calm,” said rider Grace Stronsnider, 16, who piloted Brandy. “At home, I tend to repeat the same exercises over and over, but now I think I’ll have some new ideas. Riding with different people helps me learn. It was cool to ride with someone who has helped people at very high levels.”

“They would have never had this opportunity if it wasn’t for the Washington International Horse Show and BarnManager putting it together for us,” said Carrie Roesler, mother of clinic participant Penelope Roesler, who rode Fleetwood Mac. “Pony Clubs in general are diminishing and it’s not the same as being in a big barn setting where they have clinics all the time. We have some amazing instructors, but somebody like Stacia is definitely the next level. I was impressed how she tailored each lesson to what she saw in the first five minutes and was able to correct some things that the girls have been working on for a really long time.

“I think Penelope had a huge confidence boost,” continued Carrie. “She’s just started to ride that horse after being on a little pony. Two weeks ago, she was barely cantering on him, even though she’d been jumping big jumps on her pony. When Stacia said, ‘You’re going to jump all these jumps and canter to them,’ I saw her eyes widen. But I think she needed that push, and I think she’s taking home a lot of confidence.”

One of the most popular nights at WIHS, Barn Night takes place Thursday, October 24, and welcomes local barns and horse enthusiasts of all ages for an evening of fun and exciting jumping competition, including chances to participate in group contests like Group Spirit, Group Banner, Group Video, and Largest Group (Md., Va., D.C./Other, and Overall).