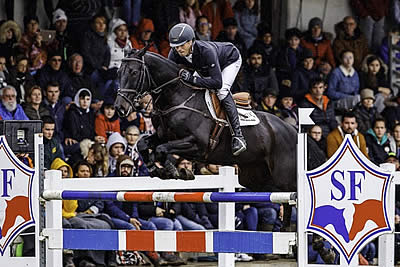 The title is decided by the best three scores of each Studbook in both categories. So when Dartagnan de Beliard ridden by Thomas Carlile and Demoiselle Platine HDC partnered by fellow-countryman Nicolas Touzaint from France finished second and fourth respectively in the 6-year-old division, and then last year’s 6-year-old champion Cristal Fontaine lined up sixth for Britain’s Kitty King in the 7-year-old division, that clinched it. The combined total scores came to 93.8, but it was a narrow win over the Irish Sport Horse Studbook with their total of 95.1, while the Dutch KWPN was close behind in third with 97.7.

Great Britain’s Piggy French steered her eventual champion, Cooley Lancer, into third in the opening Dressage phase with a score of 26.7. It was Norway’s Yasmin Nathalie Sanderson and the KWPN Inchello DHI who took the early lead on a mark of 26.3 ahead of Germany’s Sophie Leube and the Trekehner, Sweetwaters Ziethen, who were just fractionally behind on 26.6. And lining up in fourth, fifth, and sixth were Germany’s Kai-Steffen Meier with the Rheinlander QC Rock and Roll (27.1), Australia’s Samantha Birch with the SHBGB Faerie Magnifico (27.6), and Carlile with the French-bred Dartagnan (28.3).

A total of 42 horse-and-rider combinations from 19 countries started in Dressage and 38 completed Saturday’s cross-country phase, 23 going clear within the optimum time of 8 minutes 48 seconds.

And with all of the leading group keeping a clean sheet over Pierre Michelet’s beautifully designed course, there were only 2.0 points separating the top six going into the final Jumping phase so there was absolutely no room for error.

Mistakes by the leading two riders proved very costly, a pole down dropping Sanderson from gold medal position to bronze and 5.6 faults demoting Leube from silver to fifth place. This allowed Touzaint to climb from eighth to fourth with Demoiselle Platine HDC, and Carlile to improve from sixth to silver medal spot with the stallion Dartagnan de Beliard.

Piggy French, winner at Badminton (GBR), second at Burghley (GBR), first and third at Blenheim (GBR), and a member of Great Britain’s silver medal-winning team at the Longines FEI European Championships in Luhmuehlen (GER) has already enjoyed an incredible year, and added yet another accolade with a foot-perfect run that moved her up from bronze to gold.

Her new champion, Cooley Lancer, is registered with the Warmblood Studbook of Ireland and is a son of Coeur de Nobless M, bred by Eliano Meroni and owned by Cooley Farm.

It was a very different story in the 7-year-old category in which New Zealand’s Tim Price rocketed up from 13th after Dressage to seal the title with the Dutch-bred Happy Boy when both of the jumping phases proved highly influential.

This was the biggest leap up the leaderboard in the history of these Young Horse Championships, and the soft ground conditions appeared to be very much to the liking of this black horse who has a strong showjumping pedigree.

Germany’s Josephine Schnaufer held the lead after Dressage on a score of 26.7 with the Westphalian Viktor 107 ahead of Great Britain’s Tom McEwen and the ISH Brookfield Benjamin B in second (27.2) and Australia’s Christopher Burton in third (27.4) with the Selle Français Coup de Coeur Dudevin. Another Irish Sport Horse, Miss Cooley, claimed fourth spot (27.7) at this early stage for another Briton, Oliver Townend, while The Netherlands’ Tim Lips and the KWPN Herby slotted into fifth (28.0) and Frenchman Astier Nicolas was in sixth (28.5) with the ZFDP Lumberton.

However, only 17 of the 68 starters managed to avoid cross-country time penalties as the optimum time of 9 minutes 15 seconds proved difficult for many to get. When Schnaufer collected 3.6 she plummeted from first to 10th, but McEwen, Burton, and Townend all kept a clean sheet to take over the top three medal placings going into the final day, while Nicolas leap-frogged Lips to go into fourth when the Dutchman picked up 1.6 for time.

But only seven of the 56 remaining contenders managed to jump a clear round. There were 15 within four penalty points of McEwen in gold medal position and only two managed to keep a clean sheet. America’s Liz Halliday-Sharp was one of those, partnering the ISH Cooley Moonshine with which she finished third in last year’s 6-year-old category. The pair was lying ninth after Dressage and the addition of 1.6 for time dropped them to 13th after cross-country, but the fault-free run over the coloured poles put them well in contention on their final tally of 30.5.

Price and Happy Boy, which was bred by A Rijma and is owned by Susan Lamb and Therese Miller, had improved from 13th after Dressage to eighth after cross-country. And this son of Indoctro made light work of the final phase so they completed on 30.1 and now it was all down to McEwen for the title. A mistake and it would be the Kiwi rider in gold and the American in silver, and that’s how it turned out when the British rider’s grey clipped a pole down the final line for four additional faults, his final tally of 31.2 however still good enough to clinch the bronze.