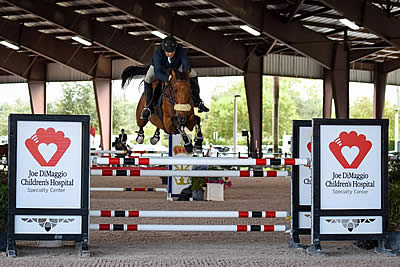 Wellington, FL – October 22, 2019 – National A and Jumper 3* competition continued this past weekend at Equestrian Village with the ESP Fall Series. Samuel Parot of Wellington, FL claimed victory in the $7,000 Joe DiMaggio Children’s Hospital 1.40m Open Stake on Sunday aboard his entry, Quick Du Pottier, after their fast and clear round bested the field of 17 exhibitors. Parot and his 15-year-old gelding mount were the first pair to contest the track, finishing the jump-off in just 34.627 seconds, and maintained their lead throughout the entire class. Blythe Karolyi of Franklin, TN and Sloan Hopson’s Costa Rica VH Waterschoot were the only other pair to return for the jump-off, completing the short track in 36.104 seconds. Clinching the third spot of this Sunday’s feature class was Kim Farlinger of Wellington, FL riding Feestje B., owned by Keren Halperin-Guy, after they finished round one in 78.045 seconds and with two faults. A mere six tenths of a second behind Farlinger was Nataly Leibovitz of Wellington, FL and her entry, Alaia Gold Z, while Angela Covert of Wellington, FL with Benjamin TR rounded out the top five with a round one time of 80.308 and four faults.

The 1.40m course was built by designer Hector Loyola, and definitely tested the competitors. With only two combinations advancing to the second round, Parot commented that “since [the course] started off with a jump directly towards the gate, many horses were on a big stride and struggled to regain balance. It was a long track and had a short time allowed.” A native to the winner’s circle, Parot also mentioned that many of Sunday’s horses were younger: “I think this course was challenging for them. A lot of the more experienced horses are still traveling.” Quick Du Pottier and Parot just returned to Wellington last week themselves, and will be competing in the Fall and Holiday shows with ESP before the 2020 Winter Equestrian Festival begins in January.