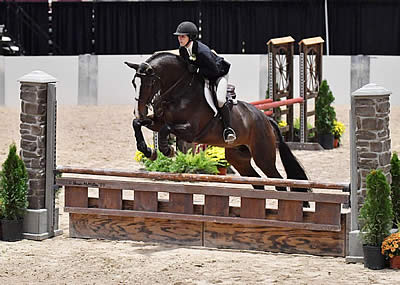 Simcik, trained by her mother Stacey and Kim Williams, piloted her own Angelique to the top spot, and has had the ride on the 11-year-old German-bred mare for more than two years. Formerly piloted by Taegan Long in the equitation, Angelique officially joined Charleez’s string by accident.

“We ran into her last rider’s mom at a show and she was hoping to focus more on the jumpers, so we took the horse originally to campaign and sell,” said Charleez, who is a senior at Garrison Forest School in Baltimore, MD. “I obviously fell in love with her right away and convinced my mom to buy her.”

Angelique and Charleez took a chance to catch the judges’ eye in the Gittings Horsemanship Final. She utilized the immense size and stride of the mare she calls a “big princess” to eat up a bending line at the end of the course in six strides where others were doing seven and sometimes eight.

“I think that line is what the judges really liked about our round,” said Charleez. “We were very concise with our round because there weren’t a lot of opportunities to do rollbacks, so I had to something to catch the judges’ eye.”

This year marks Charleez’s third year competing in the Gittings Horsemanship Final before passing the torch and the ride on Angelique to her sister Jianna. Of her experience at the WIHS Regional Horse Show, Charleez noted, “Having the Regionals at [Prince George’s Equestrian Center] makes the show feel really special. For me, it feels like a hometown show because I grew up riding around all those same people, and I know everyone. But what makes it even more special is that the local divisions have the opportunity to then compete at WIHS.”

In the USHJA Zone 3 Championships hunter divisions, Grace Walker and her own Zealand collected the championship in the Children’s Hunter Horse 14 & Under Final, while Lauren Satola took reserve on Santinos. For 15-17 riders, Margaret A. Stell and her own Clever topped the list, while Kendall Cashion and Verano earned reserve.

Leading the charge for the Small and Medium Ponies were Ashley Garrido and Color Me Happy before a tie shared the reserve between Audrey Quinn on Jems Tucker and Mary Reeves Hopkins riding My Little Golden Girl. The Large Pony tricolor went to Abigale Olmsted on Highland’s Right Royal, owned by Alexandra Panetta. Alicia Wang and Irish Rambler were reserve.

WIHS will continue a longstanding tradition as one of the world’s most celebrated indoor horse shows in 2019 and again host the $136,300 Longines FEI Jumping World Cup™ Washington, presented by Events DC for the President’s Cup, with coveted qualifying points on offer for the 2020 Longines FEI Jumping World Cup Final taking place in Las Vegas, NV in April. Additionally, WIHS will welcome qualified hunter, jumper, equitation, and pony riders from across the nation and celebrate year-end titles, including the coveted Lindsay Maxwell Charitable Fund WIHS Equitation Finals.