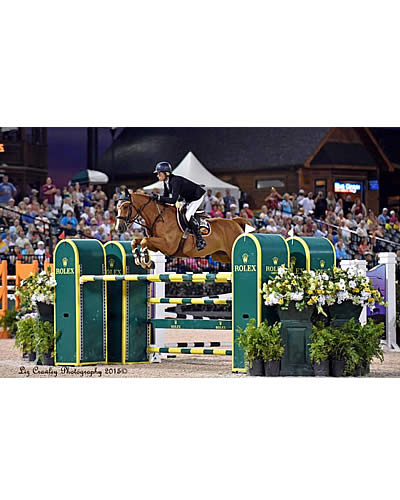 Mill Spring, NC – July 18, 2015 – In an impressive feat, Schuyler Riley (USA) added another grand prix win to her resume at Tryon International Equestrian Center (TIEC) for the third week in a row in the $127,000 Grand Prix CSI 3*. Riley, this time aboard Q-7, mastered the track and bested the jump-off round with a time of 50.627 seconds. Sharn Wordley (NZL) and Casper followed in second, crossing the timers in 51.649 seconds, while Richie Moloney (IRL) aboard Call Me Number One finished in third place with a time of 53.351 seconds. The Tryon Summer Series concludes tomorrow, July 19, highlighted by the $15,000 Under 25 Grand Prix beginning at 8am in the George Morris Arena.

With tonight’s win, Riley became the most winning rider in the history of TIEC, accumulating more than $150,000 in prize money throughout the four weeks of the Tryon Summer Series. With two horses entered in the $127,000 Grand Prix CSI 3*, there was a good chance she could prevail again, but Riley was even more surprised with her winning finish, as it was aboard the horse she didn’t expect to win on.

“I thought there would be about ten clear and I have to say, Manuel [Esparza] has done a brilliant job designing the courses this week. I have absolutely loved riding them because they’re very difficult but you don’t feel like you’re going to get into too much trouble,” she explained. “They’re great for younger horses and give great confidence building rounds to both horse and rider. When you do it right on his courses, you get rewarded. I didn’t think Q was going to step up the way he did and I’m so proud and couldn’t have asked for more of an effort from him tonight.”

“It’s really funny because I went to Sharn earlier in the spring in Kentucky because I was having so much trouble with the steering. He couldn’t figure it out and acted like he always knew where we were going, which he clearly didn’t. He always tries to pick a direction and 50% of the time it’s the wrong direction,” she laughed. “Sharn got on him and did a little exercise with him to help with the steering and I do it religiously now. He’s just gotten better and better. Sharn has helped me so much with this horse and I can’t thank him enough.”

The flashy chestnut has been slower to progress than his barn sister Dobra De Porceyo, whom Riley won the two previous grand prix classes with at TIEC. In an effort to help him gain confidence, Riley was sure not to push him too far too fast, letting him naturally rise to the top.

“I didn’t want to put him into another grand prix until I felt like he was ready and he was ready to go this week, which is why I decided that I would give him a shot,” she said. “He jumped so well in the Welcome on Thursday. It was all about the rideability and he was just straight as an arrow, so I decided that it was time to step him up.”

Wordley was hot on the heels of Riley, who also piloted two-time champion Dobra De Porceyo into the ten-horse jump-off, finishing the class in seventh place. Riley knew the class would be fast and the competition would be accurate, but Q-7 truly delivered, answering all of the questions on the course with ease.

“I had the fortunate position of going after Sharn today in the order, which was huge, because I think if it was reversed, he would have caught me and taken the win,” she noted.

Even though both chestnuts in Riley’s Wolfstone Stables seem similar in stature and attitude, they couldn’t be more different. Dobra is the cool, calm and collected sister, while Q, the silly brother, manifests his nerves internally, making them unique, but in the best ways, according to Riley.

“He’s very different from Dobra. I’ve had both of them for almost the same time, but they’re just two completely different rides. He’s been a little bit slower to develop than her. He’s a bit quirky and has his own mind. Q worries a lot more than she does,” she explained. “He really started coming into his own at Angelstone in Canada last fall. He was always good, but the steering was always an issue. His first real 1.50m class was in Miami this past spring and it was a lot to ask of him at that point. Today he showed me that he is absolutely everything we thought he was and there’s so much potential for him. I feel like we’ve only tapped into the surface of what’s there.”

“He’s a type of horse that I just didn’t know as well and it was about gaining confidence in the ring with him,” noted Riley. “He’s always had endless scope and sometimes it’s hard to believe because he’s barely 16 hands.”

As for her tremendous success at TIEC this season, Riley gushed thanks to her team and their efforts to help get both horses to this point. There are plans to return to the venue in the fall to try and continue her streak.

“We will definitely be back in full force here in October for the fall FEI weeks. The horses are so comfortable and quiet. They’re getting experience I couldn’t give to them anywhere else,” Riley commented. “It feels like heaven for me right now. Three weeks in a row is unbelievable considering three weeks ago, it was the first grand prix I had won in three years. It all came together at the right moment. The footing is perfect here, great course designing, just an incredible place to bring young horses.

“The energy here is amazing and the atmosphere is something that you can’t get anywhere else. I think that they’re both true championship quality horses and the more they have exposure to classes like this with competition like this, the better they will be in the future. They’re both just nine and have a lot more to come,” added Riley.

Also in fantastic form was caretaker and head groom, Jesus Pimentel, who has accompanied Riley into the winner’s circle for the past three weeks as part of the new Groom’s Initiative Award enacted by Mark Bellissimo, managing partner of the Tryon Equestrian Partners.

“I think it’s so amazing that Mark has initiated this new award. I’m so happy for Jesus and it’s amazing because they work so hard day in and day out. He loves his horses and I’m so proud of him. He’s taken impeccable care of both of them for a long time and they shine because of him,” Riley noted.

As for Pimentel, he was just as thrilled with Q’s win tonight as he was for Dobra’s previous two. “Q is very sensitive and he internalizes things very quickly. You have to let him know what’s going on and go slowly because he’s the type of horse that you have to be patient with,” said Pimentel. “He just stepped up to this level and I couldn’t be more proud of the way he tried his heart out tonight. They’re both incredible horses and I’m so lucky to have the honor to work with both of them.”

Competition at TIEC continues tomorrow with an array of Junior and Amateur jumper classes in the George Morris Arena, including the highlight $15,000 Under 25 Grand Prix beginning at 8am. TIEC will host with the August Series, starting on August 6, offering four weeks of hunter and jumper competition. For more information and a full list of results, please visit www.tryon.com. Please “Like” the TIEC Facebook page at https://www.facebook.com/pages/Tryon-International-Equestrian-Center to be eligible for various contests and promotions.