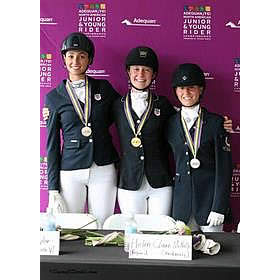 Lexington, Ky. – Dressage riders from across the United States and Canada competed for Individual medals at the 2015 Adequan/FEI North American Junior & Young Rider Championships presented by Gotham North (NAJYRC) on Friday at the Kentucky Horse Park.

In the USDF/Platinum Performance North American Junior and Young Rider Dressage Championship, it was Helen Claire McNulty (Region 2) who claimed the Gold medal in the Junior division. In the Young Rider division, the Gold medal went to Natalie Pai (Region 3).

Endurance riders competed in their 75-mile race on Thursday, and on Friday morning Kelsey Russell was presented with the Individual Gold medal. The Team Gold was awarded to Team USA Southeast. CH-J 1* Junior eventing competition also got underway on Friday with the dressage phase of competition.

The top three in the Junior Individual dressage competition all finished within less than one percent of each other, but at the top of the list was Helen Claire McNulty of Region 2. The 15-year-old and her mount, Checkmate, finished the day on a score of 70.816% to claim the Individual Gold medal.

“I did [the NAJYRC] last year, and I finished 11th individually and fifth in the freestyle. It’s pretty cool to come back here and win it,” McNulty said.

McNulty (Holland, Mich.) continued, “My horse and I, we have had a lot of problems. Last night I said to myself that if you want to do well, you have to start pushing a little bit more and asking a little bit more because he can give it to you. I just did that today, and it paid it off. I took some risks that maybe could have ended badly, but they didn’t.”

Camille Bergeron (15, Mascouche, Que.) of Team British Columbia/Quebec rode Delfiano to the Silver medal after earning a score of 70.079%.

“We train all year to get here. Just to be here and to win is a dream come true. It proves all of our hard work paid off,” Bergeron said.

“I’m really pleased with my test and my horse, and I really want to congratulate my teammates because I think everybody did a really, really good job today. All of the tests were beautiful,” Taylor said.

On Wednesday Natalie Pai claimed Team Silver alongside her Region 3 teammates, and after Friday’s Individual competition she will also be going home with a Gold.

Pai (18, Wellington, Fla.) and Fritz San Tino finished Friday’s Individual test with a score of 69.132% to secure their victory.

“I honestly just came here to have a lot fun,” Pai said. “I’m so thrilled with how it turned out. He was such a good boy, and I’m so happy with him.”

Fresh off the USEF Young Rider European Tour, last year’s Individual, Team, and Freestyle Gold medalist, Catherine Chamberlain, came into this year’s competition feeling the pressure of returning as the defending champion, and now, she is thrilled to be leaving with another Young Rider medal. She claimed the Individual Silver medal on Avesto Van Weltevreden with a score of 68.711%.

“I was on a different horse this year. He’s really green; he’s only 10,” Chamberlain said. “We just did our first Prix St. George test in February. It’s been quite the journey with him. He’s a very talented horse. I’ve been thrilled with how he’s really developed over the last few months, and I couldn’t be happier with him. He’s trying really hard, and he’s just such a good boy. This is my last year here; I age out. To come here and to get this result is amazing. I’m very happy.”

Finishing in third and taking home the Bronze medal was Naima Moreira Laliberte (18, Montreal, Que.) on Belafonte. The pair from the team of Quebec earned a score of 68.447%.

Team USA Southeast dominated the podium on Friday morning at the NAJYRC. The team took both Team and Individual Gold, while USA Northeast earned Team Silver.

Kelsey Russell, 19, of Williston, Fla., rode off with both the Individual Gold and the Best-Conditioned Horse Award aboard My Wild Irish Gold, a 12-year-old Anglo-Arabian mare owned by Valerie Kanavy. Her teammate, Annie Whelan (Louisa, Ky.), won the Style Award.

Team medals are determined by the top three highest-placed combinations. The USA Southeast team finished with the best cumulative time of 19:35:15, followed by USA Northeast (20:30:41).

Eleven of 14 starters completed the course designed by Emmett Ross, which drew numerous compliments from competitors.

“Emmett Ross got us out of the mud, and we’re very grateful for that,” said Whelan. Ross spent the entire day before the race rerouting the course because portions of the original route were belly-deep in water from torrential rains earlier in the week.

At the press conference after the awards, there was laughter and tears, particularly when the competitors talked about their horses (three of which are being retired after this event). Among the retirees is My Wild Irish Gold, Russell’s champion mount whom she has been riding for six years and whom will now become a broodmare. The pair previously won this event at the Horse Park in 2011.

“I won my first ride on her, and she took me to two world championships,” Russell said. “It’s a bond I don’t think anyone will ever take (away).”

The Silver team members were:

Area II and Camilla Grover-Dodge Lead Eventing after Day One

The three-day journey to the Eventing CH-J 1* (Junior) and CCI2* (Young Rider) medal podiums started on Friday with the dressage phase of the USEA North American Junior and Young Rider Eventing Championship.

This year marks Booth’s third time competing at the NAJYRC, and after learning experiences the past two years, she hopes this will be her best one yet.

“I think the third time is the charm, and I’m really happy to be back because it’s so great,” Grover-Dodge said. “It’s the best week as a junior. It’s so inspiring and who doesn’t want to come ride in the Rolex arena?”

In the CH-J 1* Individual competition, Grover-Dodge on Remington XXV leads the standings with 38.3 penalties for Area II. Booth, also of Area II, sits in second riding Twizzel with 41.8 penalties, and Makenna Rold (15, Delano, Minn.) of Area IV rounds out the top three with 44.9 penalties.

“We went in there and [Remington] put on his game face,” Grover-Dodge said. “He was so rideable for all the moments; he was great.”

Grover-Dodge continued, “He’s 19, so he always has to be in work: always walking, keeping him really fit because he’s older. I’m so lucky to be able to ride Remington, and I just want to do well on him.”

The CCI2* will not be competing for FEI medals and the team competition is not being held this year due to insufficient international entries.

Eight horses competed in the Farewell class in the Walnut Arena on Friday morning with Zone 2’s Lucy Matz (Coatesville, Pa.) and Cardella topping the field. The pair posted the quickest clear jump-off round in a time of 38.42 seconds.