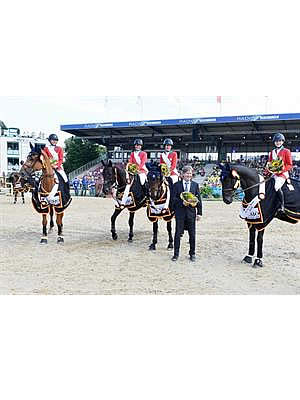 Mannheim, Germany – The Hermès U.S. Show Jumping Team was victorious today in the 100th Nations Cup of Germany, held at the Mannheim CSIO5* in Mannheim, Germany. The contest was exciting from start to finish as the talented all-female team of Laura Kraut, Beezie Madden, Kirsten Coe, and Lucy Davis were able to stave off the best efforts of Belgium and Germany, which received Silver and Bronze medals, respectively. The course was extremely challenging on a hot summer day in Mannheim as eight international show jumping teams each sought the Gold medal. After two grueling rounds, the three teams of USA, Germany, and Belgium all stood on a score of eight faults. As specified by FEI rules, victory is then decided by a timed jump-off between one rider from each of the tied teams. Chef d’Equipe Robert Ridland tapped the master of speed, Madden on Abigail Wexner’s veteran campaigner Cortes ‘C’. The duo did not disappoint as they blazed through the timers fractions of a second ahead of Belgium’s rider.

“We all came to the agreement today that this is what we do it for; It was an unbelievable day and unbelievable setting in Germany,” said an ecstatic Ridland. “The roots of the sport are here in Germany, and to be invited is an honor. We sent a strong team because we knew the importance of event. Every rider contributed today with each having a clean round. To win it and win it in a jump-off, we had an incredible experience that we won’t forget for a long time.”

The day began with the U.S. team jumping third in the starting order for the Nations Cup. First to contest for the U.S. was Olympian Kraut on Nouvelle, owned by the Evita Group. Kraut dropped an unlucky rail to receive a score of four faults. Next for the U.S. was Coe and her big chestnut mare, Baronez, owned by Ilan Ferder, Lovsta Stuteri, and Tal Milstein. Coe rode a solid round to finish with four jumping faults and one time fault for a total score of five faults, which ended up being the drop score for Round One. Young Davis rode third for the U.S. on her lanky chestnut partner, Barron, owned by Old Oak Farm. The duo was flawless in their performance, resulting in zero faults. The anchor ride for the U.S. came from former USEF Equestrian of the Year Madden and her formidable partner, Cortes ‘C’, 2014 International Horse of the Year. With a fault at the water, the pair finished on a score of four faults and the U.S. was tied for third place after Round One.

Round Two of the Nations Cup competition saw superb efforts from all U.S. athletes. Kraut returned in the lead-off position with Nouvelle to finish a fast, clean round. Coe and Baronez galloped through the timers in the second spot, also to produce a clear round. With two unlucky rails, Davis and Barron finished the round on a score of eight faults which proved to be the drop score in Round Two. The pressure was on Madden who marched around the course with her characteristic poise to finish with zero faults.

At the end of two rounds, teams from the U.S., Belgium, and Germany all stood tied with a total of eight faults. Three horse-and-rider combinations chosen by the Chefs d’Equipe of their respective countries faced off on a shortened course against the clock. Madden entered the jump-off first. Cool and collected, she executed the course brilliantly to finish ahead of the German and Belgium riders.

The four U.S. women entered the arena for the medal ceremony wearing Gold medals and sashes. Both humans and equines held their heads high as the U.S. national anthem was played at the centennial Nations Cup of Germany.

Competition continues with the Grand Prix of Mannheim on Sunday at 2:30 p.m. CET.

Find out more about the 100th Nations Cup of Germany.