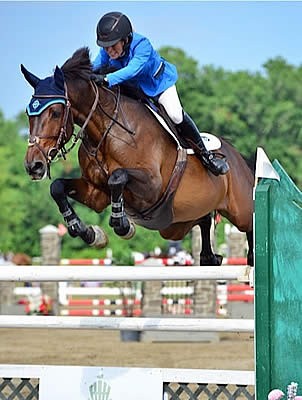 What a night at the Charleston Summer Classic! The $35,000 Devoucoux Grand Prix took place before a sold out VIP tent, shirtless firemen models posing to benefit the Charleston Animal Society and special guests from Regions Private Wealth Management.

The course was designed by Classic Company Technical Coordinator, Allen Rheinheimer of Zionsville, Indiana, who also acted as the Technical Coordinator for the recent World Games in Las Vegas. Rheinheimer set the first round time allowed at 83 seconds. Whitney Owens in the irons of DS Holdings, LLC’s Callaghan K was the first to go and made it look easy when she posted a clean first round in a time of 75.758 seconds. The horse and rider teams that followed had multiple rails and subsequent faults, until Julie Lee’s Osiris entered the ring with Gemma Paternoster of Wellington, Florida in the irons. The team turned in a double clear round in a time of 77.431, ensuring there would be a jump-off.

Haley Lubow and Krisley Hill Equine, Inc.’s Calligraphy was the next pair to turn in a clean first-round effort in a time of 78.090 seconds and would join Paternoster and Whitney Owens in the jump-off.

Three additional horse and rider teams posted clear rounds, which included Paternoster and her own Zonneglans, winner of the $5,000 Welcome presented by Finish Line Horse Products. The pair turned in a clean first round effort in a time of 76.099 seconds.

Whitney Owens and Calaghan K was the first to tackle the jump off and although she beat the time allowed of 49 seconds with a time of 41.957 seconds, a rail down and four faults saw them finish in seventh place overall. Osiris and Paternoster followed and finished clean, setting the new time to beat at 38.249 seconds.

Lubow and Calligraphy followed but with a rail at fence two, their time of 40.272 seconds and four faults would see them finish in sixth place.

Frankie Owens was next up in the irons of DS Holdings, LLC’s Capricello 2. Four faults in a time of 38.905 would see them finish in fifth place overall.

Baskind and Matilda followed, but with four faults in a time of 46.319 seconds, would finish in eighth place.

Zonneglans and Paternoster were next and the pair galloped through the course clean in a time of 38.107 seconds, setting the new time to beat! “I knew she has all the scope to turn tight and still clear the jumps,” commented Paternoster. “I wanted to set a fast time to put a lot of pressure on, particularly on Tim [Maddrix] since he beat me last week!” she added.

“I trust her to be totally careful at the rails always,” said Paternoster. “My job is to give her a great trip and she sees to jumping everything very cleanly,” she added.

Gilchrist was up next with Serena and looked to beat Paternoster and Zonneglans’ time. Their clean round in a time of 38.107 seconds was just not fast enough and the pair would finish in second overall.

Maddrix and Specialized were in the enviable last to go position, but four rails in a time of 37.888 would see them finish in fourth place overall.

“Dolly [Zonneglans] has competed and placed in many grand prix,” said Paternoster, “but this is her first win and she really deserved one. When you’ve had a mare since a four-year-old, you tend to develop a pretty awesome bond by grand prix,” she added. “It was a fabulous end to a perfect Charleston Summer Classic!”