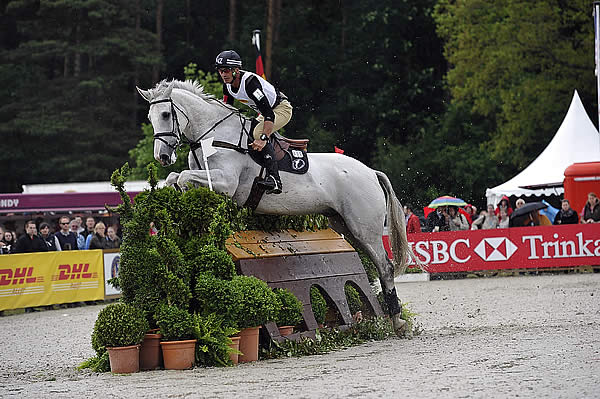 Lausanne (SUI), 15 June 2013 – Andrew Nicholson (NZL) opened and closed Cross Country day with two perfect rides and is now in the lead on Mr Cruise Control, the last horse on the course at Luhmühlen, presented by DHL Paket, the penultimate leg of the HSBC FEI Classics.

Nicholson is also sixth on the pathfinder Rathmoyle King, but he got soaked in the middle of the day when Qwanza fell on landing in the influential first water complex, fence 4.

Zara Phillips (GBR), who is only 1.7 penalties behind Nicholson in second place, was the heroine of the day as a violent storm broke when she was midway round the course. However, neither she nor her horse High Kingdom appeared inconvenienced by the blinding rain and howling wind.

“It was a bit hairy near the end of the course when I could hardly see, but I’m so happy with the horse – he was listening to me for once!” said Phillips, who lost the silk on her helmet in the wind. “The hurricane was a bit interesting, with all the leaves blowing around, but the horse was fantastic. I pointed him and he jumped.”

Kevin McNab (AUS), the man who taught this year’s Badminton winner Jock Paget (NZL) to ride, is now having his moment in the spotlight and is third on Clifton Pinot.

“I was lucky to go early I think,” said McNab, who has left his Queensland home to have a spell competing in Europe. “My horse gallops really well and, as my owner was confident we’d get the time, I was under orders.”

The top of the leaderboard has been considerably rearranged. Dressage leader Ingrid Klimke (GER) retired after Tabasco TSF tripped out of the DHL Paket Komplex (fence 4) and ran past the boathouse which was the final element.

Lucinda Fredericks (AUS), second on Flying Finish, clocked 19.6 time penalties and is now 11th. She explained that she and Flying Finish were not fully fit due to her being injured in a fall in March.

“I’m out of breath just running up the hill here, so today was a very big step for me,” said Fredericks. “My plan for the weekend was to have a good competition and get a qualification. I’m just pleased to be here and am very happy with my round.”

Dirk Schrade (GER), seventh after Dressage on Edino, also retired after a steering problems at fence 4. Peter Thomsen (GER), fifth after the first phase on Horseware’s Cayenne, incurred 22.4 time penalties and is now 16th and Kai Rüder (GER), sixth after Dressage, had a runout on the onward-bound stallion Le Prince des Bois at fence 28.

Andreas Dibowski (GER) and FRH Butts Avedon are now best of the home side, having risen from 16th to ninth with just 3.6 time penalties.

Like Nicholson, William Fox-Pitt (GBR) produced two clear rounds inside the optimum time of 11 minutes 14 seconds, and is now fifth on Neuf des Coeurs and seventh on Lionheart.

Jonelle Richards (NZL), Nicholson’s Olympic team mate, was another to finish on a clean sheet and is in eighth place on Flintstar.

There were 25 clear rounds, 10 of which were inside the time, and 34 horses completed.

The most surprising mishap was for the usually foot-perfect combination of Nicola Wilson (GBR) and Opposition Buzz. The black gelding tripped in the water at fence 4, took off early at the step out and tipped over the boathouse. Neither he nor his rider was hurt.

The only serious accident of the day was the fall of French rider Emeric George and P’tite Bombe at fence 12, a rounded obstacle topped with brush, in the main arena where there were no other incidents. The horse was taken to a veterinary clinic for examination where, sadly, the decision was taken to have him humanely put down.

Andrew Nicholson, the only competitor to have three horses, talked through his busy day. “I’ve only ridden Rathmoyle King once before, but Carolyne Ryan-Bell [his owner] has done a great job producing him and it felt as though I’d ridden him for all of his career.”

He continued: “Qwanza didn’t do anything wrong when she jumped into the water and I don’t think I did. It was just one of those things. So I had a shower and dried my boots and then I got on Mr Cruise Control. He is very experienced at this level and was a pleasure to ride.”

Nicholson, 51, who is having the best run of success in his long and hardworking career, is now in line to win his fourth CCI4* in 12 months. This would greatly enhance his lead in the HSBC Rider Rankings and the HSBC FEI Classics, but he said he was “just going to live for the moment tonight”.