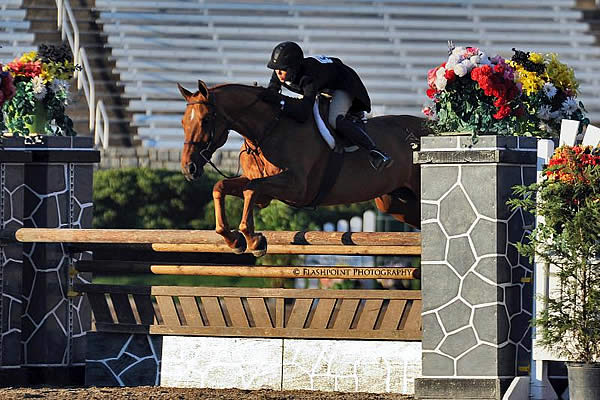 Elizabeth Boyd and Brunello sail over an oxer en route to the win in the $25,000 USHJA International Hunter Derby. Flashpoint Photography.

The Georgia International Horse Park is buzzing with activity as the Atlanta Summer Classics welcomes a record number of competitors to its opening week which kicked off Wednesday after the USHJA Emerging Athletes Program wrapped up.

In the $25,000 USHJA International Hunter Derby, the first round saw Triomph, owned by Loretta Patterson, ridden by Holly Shepherd of Grand Bay, Alabama, take the lead with a score of 181, but Brunello, owned by Janet Peterson and Elizabeth Boyd, Fieono, owned by Kelley Maloney, and Quatrain, owned by Finally Farm and Janet Peterson, all ridden by Elizabeth Boyd of Camden, South Carolina, were on Shepherd’s heels with scores of 177.50, 177 and 164, respectively.

The handy round saw Boyd working a hat trick when she secured the top three spots on Brunello, Fieona and Quatrain, respectively.  Brunello and Boyd received a handy score of 201 and a final score of 378.50, giving them the win.  Fieono received a score of 186 in the second round and a final score of 363 which secured second place.  Boyd and Quatrain scored a 195 in the handy round bringing the total to 359 and a third place finish.

Shepherd and Triomph received fourth place honors with a second round score of 171 and a total of 352.

Harold Chopping of Southern Pines, North Carolina, in the irons aboard Caramo, owned by Caroline Russell Howe, had a fifth place finish after scoring a 151 in the first round and 182 in the handy round, securing a total score of 333.  Alexa Boggio of Canton, Georgia and her own SS Whisper had a final score of 308 which earned them a sixth. Wimberly Debono of Birmingham, Alabama and her own Tusker finished with a score of 299.50 and a seventh place.  Daniel Geitner of Aiken, South Carolina guided Damocles, owned by Janet Peterson, to a final score of 271 and an eighth place finish. Kelci Crenshaw of Woodstock, Georgia rode Fit to Print Farm’s Headliner to a ninth place finish with a total score of 269.75. Timothy Maddrix of Birmingham, Alabama and Stella Styslinger’s Trending finished in the tenth position with 269.50. Victoria Press of New York, New York and her own Charleston Z wrapped up the eleventh place with a combined score of 258 and Crenshaw and Fit to Print Farm’s Lead Story wrapped up the twelfth spot with a score of 243.

The USHJA National Hunter Derby, presented by FarmVet, saw Miramax, owned by Donna Bassinger and ridden by Julie Curtin of Roswell, Georgia, take the win out of a field of twenty-five.  In second place, Fairfax, owned by Liz Hudspeth and ridden by Curtin, wrapped up the second position, while Lyn Sythel of Johns Island, South Carolina rode her own Versace to the third place position.

Week I of the Atlanta Summer Classics saw thirty-five tackle the $15,000 Welcome Class designed by Manuel Esparanza of Mexico.  It was Aaron Vale of Ocala, Florida who stole the show and took home the $4,500 check aboard Zenith UHS, owned by 2VR Showjumpers.  Jared Peterson of Archer, Florida took the second place spot in the irons of Titus 2:11, owned by Derek Peterson, and third place went to Harold Chopping of Southern Pines, North Carolina and Calando Z, owned by Patty Ann Burns.  Fourth was awarded to Liza Finsness of Wellington, Florida and her own Ormsby Hill.  Lazaro, ridden and owned by Jordan Coyne of New Port Ritchey, Florida, earned a fifth place ribbon while Alex Grenato of Elizabeth, Colorado and his own Gangsta took sixth.

There are a handful of stalls left for next week, so make sure you get your entries in today because you don’t want to miss the fun at the world class Georgia International Horse Park, home to the 1996 Olympics, for these two weeks of non-stop show jumping action.  The venue offers the one of a kind Olympic feel and offers excellent stabling, arenas, footing and of course, award winning service found only with the Classic Company.  And make sure to catch the best of ringside action and reserve your VIP tables today.  There is no better deal on any circuit and cost only $300.00 a week for a table of eight.

Anyone who has shown with the Classic Company knows what sets them apart from the rest:  Classic Shows are FUN!  Complimentary exhibitor parties, luncheons, Saturday pizzas and the friendliest show management team anywhere work hard to make your showing experience the best.  Classic Company never charges an add or scratch fee for those last minute changes and there is no office fee added for credit card payments.