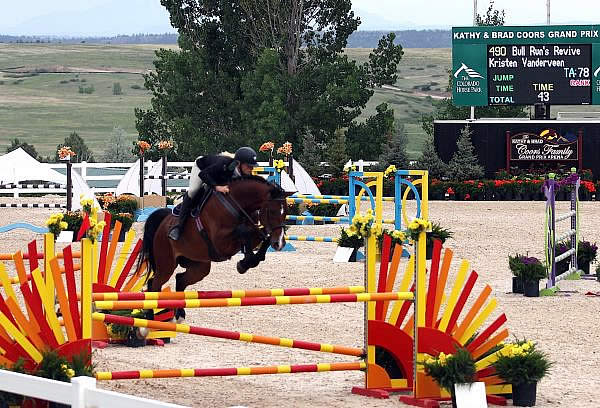 Parker, CO – June 14, 2013 – The third day of the Summer in the Rockies II was filled with exciting show jumping competition in the Kathy and Brad Coors Family Grand Prix Arena. In the $1,000 7/8 Year Old Young Jumpers, Kristen VanderVeen and Bull Run’s Revive repeated their victory from Week I by nabbing the championship once again. The duo executed Danny Foster’s course in great form, proving the talent of these rising stars.

“I thought the course rode really nice; it was smooth, very nice for the young horses,” VanderVeen said. “There was nothing to surprise them.”

VanderVeen imported Revive as an approved Holsteiner stallion and later gelded him.

“We got him in the winter. He’s been progressing,” she said. “My brother did him in some amateur stuff. I’m excited; I think he’s going to be my up-and-coming grand prix horse. He’s got great technique and he’s very rideable and conventional.”

VanderVeen said that her other two entries in the class are much greener than Revive. VanderVeen and Bull Run’s TMac were second in the class. She named the horse after a Christian band.

“He’s green but has so much talent,” VanderVeen said. “He’s a little hot at the moment so we’re working on bridles and things like that. He’s my Dad’s favorite horse, and the flashiest horse I’ve ever seen, with that kicking out behind. It is only his third time doing the division. It is a nice place to step them up. The footing here-they jump well off it. The course was built nicely. You could just ride the track on it.”

Mercy Me, also imported by VanderVeen when the mare was 5, is another talented mount she has high hopes for a stellar career.

“She’s my baby and my long-time project,” she said. “This is only the second time she’s done a Young Jumper class. I have her on the slow track. I stepped her up to see and I made a small mistake but she handled it well.”

VanderVeen will compete aboard two mounts in the Grand Prix on Saturday afternoon.

“I thought the course rode really well,” she said. “I did the Highs, the Lows and the Modified so I did three times on all my horses. I really enjoyed it. I love the footing. My horse really stomps the ground when he goes. Here it is so soft. You feel like you can turn really well and you don’t slip. I really like it.”

Van Ackeren has had Vernon G for about a year and a half and it took a full year for her to find him. She finally hit the jackpot in Thousand Oaks, CA, where Kirsten Coe had been riding him.

“He’s little – only 16 hands,” she said. “He’s wild and he’s really, really hot but he knows his job and does it really well. He has hidden springs in his back legs because he jumps really big. He’s a ton of fun to ride. He’s put together really well so he doesn’t look small but he wears pony-sized everything. He’s a blast.”

Van Ackeren, who rides with Matt Cyphert at the shows, will return for her sophomore year at University of Texas this fall. She plans to stay for the entire Summer in the Rockies circuit and will celebrate her birthday on July 9 at the Colorado Horse Park.

“It was a good course,” said Font about Foster’s track. “There weren’t so many clears and I was quite pleased with the way the horse jumped. I got Kissimmee last year. She’s sensitive; I’ve been building her up. I think she’s ready for the next step. I think the footing is wonderful. We love it here. We enjoy the summers here. They’ve done a great job over the years and we’re really happy to be here.”

In the 1.40 Open Jumpers, Bjorn Ikast and his own Iz’s Viva La Vida delivered an electrifying performance earned the pair the win just edging out Font and Calotta, owned by Ashton Galo Paley.

Saturday show jumping action begins Saturday at 8 a.m. The not-to-be-missed highlight of the day is the $30,000 Summer in the Rockies Grand Prix Presented by Littleton Equine Medical Center and Platinum Performance held in the Kathy and Brad Coors Family Grand Prix Arena at 4 p.m.