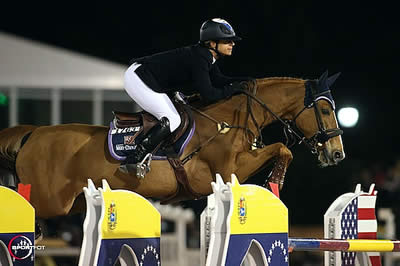 Kate Eagleton and My Mr. Darcy Take Home the Blue Ribbon in the THIS Children’s Medal 15-17

Held under the bright lights of the International Arena at the Palm Beach International Equestrian Center (PBIEC), Saturday’s class featured 45 starters with 10 clear rounds over the course set by Guilherme Jorge of Brazil. In the jump-off, only two were able to clear the short course without fault.

Sixth to go in the second round, Marie Hecart and Myself de Breve produced the first double clear in the winning time of 38.61 seconds. Kent Farrington (USA) and Amalaya Investments’ Willow immediately followed with a faster time of 36.79 seconds, but had a defeating rail at the last fence to finish fourth. Ben Maher and Tatiana Korsakova’s Diva II came one round later to produce the second clear in a time of 40.55 seconds. Last to go, Eric Lamaze and Artisan Farms LLC’s Fine Lady 5 completed the fastest round of the night in 36.54 seconds, but dropped one rail to finish third.

Myself de Breve is a 15-year-old Selle Francais mare by Quidam de Revel x Grand Veneur. One of the smallest horses in the class at just over 15 hands, what “Myself” (or “Mini Me” in the barn) lacks in height, she makes up for in heart. Hecart has had the mare since she was four years old and has developed a great partnership over the years.

“We know each other really, really well and she has been more and more consistent,” Hecart stated after her win. “The older she gets, the better she gets, and it is really nice to have her in good shape and competitive.”

“I was always really close with Myself,” Hecart said of winning the big classes. “We were always clear and really consistent, but there was always one down in the jump-off or we were not fast enough. Today, I don’t know why, but it happened and she was amazing. It is always a really nice atmosphere and a good crowd here on Saturday, so it is always really exciting to ride here. She loves it. She likes the noise, the crowd, and the night. She even jumped better at night.”

“I was really excited (to win),” Hecart smiled. “It has been a lot of work with my team, my grooms, and all of the people around me. We have always been so close, but couldn’t win, so today is really important.”

Of her jump-off round, the rider detailed, “I cannot go over my speed because she can get really excited and have a rail down. I wasn’t fast in the beginning, and I just took a chance at the last jump. I wasn’t really that fast, so it was good that Eric had a rail.”

With his second place finish, Ben Maher was happy with a great result aboard his mount Diva II and was pleased to see the mare in good form for the night’s class after a good end to the 2014 season.

“She’s fantastic. She has a little bit her own style,” Maher admitted. “She was great in Olympia in London; she won there. I jumped her last week when she came out of quarantine and she was really fresh and crazy, but tonight she was back to herself.”

“I think the first round was a long course actually. It was a difficult course,” Maher noted. “Some of the horses coming back in the jump-off were not necessarily tired, but they didn’t jump quite as well. It was big money, a lot of people making mistakes. I decided to play it a bit safe and take a check home. It is not in my nature to not have a try and go to win to be honest, but I went around to the second fence and I thought I would be a bit closer to Marie than I was actually. I was way off the pace, but I’m happy for her and it is nice to get a good result early on in the circuit.”

Eric Lamaze has been on excellent form with numerous wins in the beginning of the WEF circuit, including wins in all four rounds of the Ruby et Violette WEF Challenge Cup Series. The last two wins were back-to-back with Fine Lady 5.

“She felt the same,” Lamaze said of Fine Lady’s performance tonight. “I rode her last Saturday night, and I was pleasantly surprised. She had no reaction and was the same under the lights. With the atmosphere, she jumped an incredible first round. Marie was very fast in the jump-off, so she didn’t leave much on the table and we had to try. For my horse, going last in the first round and then into the jump-off right away, there wasn’t a lot of recovery time. She barely touched that fence. She’s a great mare and I’m very happy to be riding her in these 1.60m grand prix because she wasn’t really bought to do this. For me, it is exciting to have another horse to do it.”

With all of his latest wins, Lamaze was not disappointed with a third place finish.

“Not when you’re third to Marie and Ben,” he stated. “It’s great competition. When you go at this speed, you need a little luck and that’s the way it goes sometimes. My horse jumped very well, and there is no shame in being third on this circuit.”

The Winter Equestrian Festival has some of the toughest competition in the world with many of the top horses and riders competing, and Lamaze and Maher each spoke to the addition of four five-star weeks this year.

“We used to be in Florida to prepare our horses to go compete in Europe or somewhere else in the U.S., but now with the five-stars and the increase in prize money, it becomes a serious competition. It is a serious circuit,” Lamaze acknowledged. “I think a lot of riders are preparing their horses to be here and not train them, but really compete. That is the difference. Florida used to be a training circuit for the rest of the year, but now it is a real competition: a real show with real riders and great horses.”

“It is a long season, so you have to be careful, but it is definitely always great to ride here on a Saturday night and the increase in prize money brings all the best horses out and the best riders,” Maher added. “I think it was a great competition and it is always good to see the amount of horses in the jump-off and not everybody going totally crazy. It was good jumping tonight. They were big jumps, and it was good sport.”

Kate Eagleton and My Mr. Darcy Take Home the Blue Ribbon in the Taylor Harris Insurance THIS Children’s Medal 15-17

On Saturday morning Kate Eagleton, from Miami, FL, took home first place in the Taylor Harris Insurance Services (THIS) Children’s Medal 15-17. Eagleton earned a score of 85 in the first round with Catherine Cech’s horse, My Mr. Darcy, on her way to topping the field of 20 competitors.

After the first round was complete the riders with the top four scores came back for a work-off. Eagleton went into the work-off with the top score and remained consistent to finish as the winner. Second place honors went to Raleigh Hiler, who received a first round score of 82. Isabella Usenza ended the day in third place and Phoebe Alwine rounded out the top four.

“This is my first time winning a Taylor Harris [Children’s Medal] so I was really excited!” Eagleton exclaimed after the final results were announced.

At the beginning of the WEF circuit Eagleton was unsure if she was going to be able to show after her own horse was injured. Eagleton is thankful that My Mr. Darcy was available as a two-week substitute. “He [My Mr. Darcy] is very simple. He helps me out when I don’t know what to do,” Eagleton said about her new horse.

Despite little practice time, Eagleton was still able to master the first course. Eagleton commented, “My first round was really good. The first jump was a little deep. I didn’t see the distance, but I stayed calm and it worked out. The other jumps in the course just came up.”

Even with the success that Eagleton has had with My Mr. Darcy, she is excited to have her own horse back in the show ring. When Eagleton’s horse is ready they will compete in the 3’6″ equitation medals as well as the THIS Children’s Medal. Eagleton hopes to qualify for THIS National Children’s Medal Finals, held at Capital Challenge Horse Show in the fall, as well as qualify for their ASPCA Maclay Regional.

Eagleton is currently a senior in high school and makes the commute to Wellington to compete on weekends. Along with balancing a busy riding and commuting schedule, Eagleton is a part of her high school’s yearbook staff.