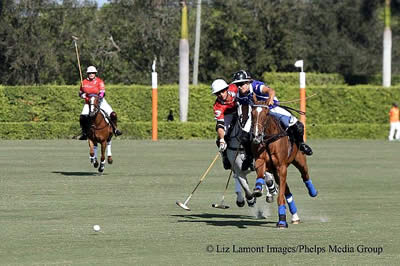 Coca-Cola Effervescent after 12-8 Win over Tonkawa

If the teams weren’t wearing different colors, you’d almost have thought you were having déjà vu in the second match. In an unusually balanced day of play, both games played out in similar fashion (with the exception of the astonishingly electric pace Valiente set in the first game). Neither team was dominated by an individual goal-maker. All 16 players scored, each making between one and three goals.

But that’s not to say there was no suspense. For a time, the final results could have gone either way. Although FlexJet and Tonkawa were never able to take the lead, both managed to give their opponents a few grey hairs, briefly tying the score (FlexJet in the sixth chukker and Tonkawa in the third).

In the first match Valiente moved at warp speed, with watertight team play. Its performance was particularly impressive, given that three of its four players were subbed in at the eleventh hour. Late Friday afternoon a revised roster showed a swap of 10-goalers for Valiente. Sapo Caset moved into the number 3 position, replacing Adolfo Cambiaso, the number one ranked player in the world (who, word has it, is not expected to start playing until the 26-goal tournaments begin at IPC in mid-February). As for the other two changes to Valiente’s lineup, no one knew for sure until Saturday morning – including the players who subbed in – that Peke Gonzales and Tommy Beresford would replace Bob and Rob Jornayvaz. Rob had a fall in practice Friday, which prompted Bob, his father, to re-evaluate the roster.

With its original lineup intact, FlexJet made the first goal of the game. It came courtesy of Cody Ellis, the only FlexJet player to score in the first chukker. Caset and Santi Torres, a strong 7-goaler, each scored in quick succession, giving Valiente a 2-1 lead at the top of the second chukker. All three goals were made from the field, as were the rest of the points until Miguel Astrada scored on a penalty shot at the very end of the third chukker. The first half was punctuated with numerous shots by both teams that went wide.

FlexJet hit the throttle in the second half. Astrada continued his scoring streak, with superb ball handling for goals in each of the fourth and fifth chukkers. One of his strongest plays was a nearside necks hot in the first minute of play during the fifth. FlexJet also mounted a strong defense, keeping Valiente from scoring in the fourth.

In a show of sportsmanship during the fourth chukker, Melissa Ganzi didn’t hesitate to pick up Torres’ dropped mallet and hand it back to him. She got in a lot of plays throughout the game, many of them on passes from Astrada and Ellis amidst fast-paced pressure by Valiente.

Valiente maintained a three-point lead in both the fourth and fifth chukkers, ending the fifth with a 7-4 lead. The final chukker took a few tense turns as FlexJet made three goals to tie the game at 7-all. Valiente didn’t let that stand for long, though, smacking in two goals in quick succession to clinch a 9-7 victory.

“I know we could have played better, but it was the first game of the season,” said Caset. “We did okay, I think. We played much better in the first half than the second half. But a win is a win, and to start like this is good.”

For Gonzales, “It was my first time here playing with Sapo. It was amazing!”

As for being subbed in, Beresford said, “I knew I was subbed, but I didn’t actually know I was playing until 8:00 this morning. Obviously, you’ve always got to be prepared.”

Torres was beaming after the game. “The team was put together at last minute. When that happens, you have to (get to) know each other quick – and we did. It worked. I had fun!”

Coca-Cola Effervescent after 12-8 Win over Tonkawa

Coca-Cola defeated Tonkawa on its home turf of Everglades Polo Club 12-8 to win its first game of bracket play in the Ylvisaker Cup.

Julio Arellano scored the first goal of the match on a penalty shot for Coca-Cola. After some wide-open play in typical Coca-Cola fashion, Inaki Laprida put the first goal on the board for Tonkawa in a penalty conversion. Sugar Erskine maneuvered through traffic to bring the ball to the goalmouth for Mason Wroe, who swept the ball in to take the lead 2-1 at the end of the first chukker. Gonzalo Deltour started out the second chukker with a penalty shot to even out the score 2-2. In a series of penalty shots, Arellano converted to once again put Coca-Cola in a narrow lead. Inaki Laprida answered with a goal on a breakaway to end the second chukker 3-3.

Coca-Cola took the bit in its teeth in the third chukker as Arellano scored yet another penalty conversion for Coca-Cola. In a turning point in the game, Erskine powered the ball up-field to Gillian Johnston, who scored off of a powerful offside shot to make the score 5-3. Arellano built off of the momentum of his teammates as he scored the next two goals in quick succession, ending the chukker with Coca-Cola firmly in the lead 7-3. Tonkawa looked to turn the tide at the start of the fourth chukker with a goal by Deltour. Coca-Cola used outstanding team play to position Wroe for a near side neck shot that cemented Coca-Cola’s lead. Arellano made a penalty conversion to put one on the board and end the fourth chukker 9-4 in Coca-Cola’s favor.

Erskine and Johnston teamed up for another effective play to score 10-4 at the beginning of the fifth chukker. Arellano followed up with a near side neck shot to make the score 11-4. Deltour demonstrated his significant ball-handling ability, bringing the ball in for a goal for Tonkawa. Tonkawa gathered momentum going into the sixth chukker, starting off with a goal by Jeff Blake to narrow the gap and make the score 11-6. Deltour continued his hot streak with a goal of his own to deepen Tonkawa’s resurgence. In one of her signature speed plays, Johnston scored off of a breakaway to make the score 12-7. Deltour scored the final goal of the game with a lofted shot to convert and finalize the score at 12-8.

Erskine pointed to the third chukker as the turning point for Coca-Cola when it took charge of the match.

“I think we got super lucky in the third (chukker) because the game was backwards and forwards, maybe a little penalty-orientated for a bit,” said Erskine. “Those last two minutes of the third kind of gave us that little jump, but it wasn’t an actual reflection of what the game was like at that time – it could have gone both ways.”

When asked about his superior ability to place himself at the right place at the right time, Wroe said, “It’s the team and the captain, Julio. I give him the credit. He positions me really well so I know where to be and just be patient with the plays and let it come through us. It all goes back to your preparation and organization.”

And when it all comes down to it, polo is about fun for Arellano. “If you don’t have fun, it doesn’t work,” he said.

The Ylvisaker Cup continues Sunday at IPC, starting with Enigma vs. Orchard Hill at 10 a.m. Villa del Lago plays Lucchese at noon, followed by the featured 3 p.m. match between CT Energia and Audi.