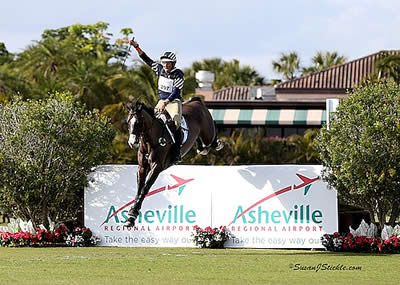 Wellington, FL – January 31, 2015 – Boyd Martin (USA) and Trading Aces proved to be unbeatable this weekend at the first-ever $50,000 Wellington Eventing Showcase presented by Asheville Regional Airport. Martin and Trading Aces led the competition from start to finish, completing the weekend on their original dressage score of 24.80. Michael Pollard (USA) and Cyrano Z finished in second place on a 25.7 with Laine Ashker (USA) and her own Anthony Patch in third, ending the weekend with their original score, 29.1.

The Derby Field at Palm Beach International Equestrian Center was packed with more than 2,000 spectators on a beautiful Saturday afternoon as visitors from around the country came to see the first-ever eventing competition in Wellington unfold. Martin commented that the entire competition was first-class, and it was a privilege to be a part of such a unique competition. “I’ve been lucky enough; I’m 35 and I’ve competed in Australia, New Zealand, Canada, Holland, U.S., France, England, and this is by far the best competition I have ever been to,” he expressed. “The organizers have put on something I have never seen before, and I am just so proud to be here.”

From the incredible footing of both the dressage and show jumping arena and out on the cross-country course, the riders were all very pleased with the event as many of them used it to begin their spring season and prepare for the Rolex CCI4* in Lexington, Kentucky later in the spring. “I think this was the right test for this time in the year and certainly for those who haven’t seen this type of atmosphere before. It is always great to get some experience in a place like this because it is similar to Kentucky,” commented Pollard.

Martin concluded a wonderful weekend aboard Trading Aces, piloting the 2004 Irish Sport Horse gelding, to his first big win of the 2015 season. The two performed a lovely dressage test yesterday late in the afternoon to take the lead in the large class on a 24.80, the score on which they would finish. Martin was ecstatic to take home the win this weekend and felt the course was perfectly suited for Trading Aces. “For me, at this time in the year, my horses are not that fit yet, so it was perfect. It was right around the three and a half, four-minute mark, and it was a well-designed course with a few galloping questions and then double corners to test for accuracy and Mt. Wellington down to the narrow (jump) is probably a 3 or 4 star question,” he said. “It was spot on for this time in the year.”

Ashker agreed with Martin’s comments, adding that the course had every type of question you need to be asked when going out at the Advanced level. “I was nervous before we left the start box. It had all of the questions you need: water, a ditch, corners, and skinnies. I definitely respected it and felt like I had a horse who was super happy and healthy coming off when we finished. This was pretty much my cross-country school for the Carolina International 3* in March, and it was tough but fair at the same time.”

Captain Mark Phillips, the designer of the cross-country course, was also pleased with the way the course rode for the riders this early in the season. “A lot of the infrastructure was already here. We tried to put together a 3* test that was appropriate for the time of year and the fitness of the horses. When we talk about the future of the sport in this sense, I think we will see a lot more of these types of events as build-ups to Rolex and other large international competitions,” he continued to explain. “It is a huge benefit to the riders, the horses and in particular the owners and the sponsors. When everyone is happy we have a good sport to look forward too.”

Earlier in the day, all of the riders tested themselves on Richard Jeffery’s show jumping course in The Stadium Arena. The course was very technical and proved to be challenging for many of the pairs as numerous rails fell throughout the morning. “I think there are a couple of designers who do a good job at testing event horses, and Mr. Jeffery is one of them,” stated Pollard. “I thought it was tough. You had to have some sort of plan coming to many of the lines and needed to ride well for them to work.”

Ashker agreed that Jeffery’s course was more technical than what she expected when she walked it, as this arena is smaller than what most are used to competing in. “They are always very technical. You had to use a lot of leg, which made it a bit deceiving in that way. You had to really ride forward, but that is exactly what you need before going out on cross-country and it kind of set the precedent for what to expect out there.”

Cyrano Z arrived in Pollard’s barn only a few weeks ago from his father-in-law Carl Bouckaert, who rode the horse in the 2012 London Olympics. The pair, who has only had a few weeks to familiarize with each other, had a stellar performance across the board, and Pollard was thrilled. “He was perfect today. I don’t know him that well, but it couldn’t have gone a whole lot better. Carl has had a lot of clear rounds on this horse and I thought I’d better do a good job so I just held on and let the horse do his job, which he did quite well,” he said.

As for the future, all three riders have different plans for their mounts. Ashker plans on heading Anthony Patch towards the Rolex Kentucky CCI4* in April while Pollard and Martin are still trying to figure out where their partnerships will go with Cyrano Z and Trading Aces. “To be honest, this may or may not be the last time I ride Trading Aces. We’ve had some massive highs and lows, and we will just have to see,” said Martin. He also piloted Pancho Villa to a 7th place finish this weekend. According to Pollard, the plan was to just give Cyrano Z a leg up to prepare him for sale, but those plans could be changing after their finish this weekend. “We’ll take it one day at a time and if someone with the right situation comes around we will figure that out, but I wouldn’t mind keeping him around for a while,” he stated.

Mark Bellissimo, CEO of Equestrian Sport Productions, was excited and grateful to the competitors, sponsors, and owners for coming together to be a part of such a unique opportunity for the sport. Equestrian Sport Productions and the Bellissimo family, who now own both the Tryon International Equestrian Center in Tryon, North Carolina, as well as the Colorado Horse Park in Parker, Colorado, are looking to help grow and elevate the stature of eventing in the United States.

“We had been contemplating doing this event for probably three or four years, trying to figure out something interesting we could do with eventing,” Bellissimo stated. “When we threw out the idea of doing an event, we talked about what it would take to get people to come down here and my colleague, Jim Wolf, said maybe $25,000 (in prize money). So we decided to double it, and I didn’t realize that it would turn into the second largest event in terms of prize money in the country, which really is a shame. The athletes are spectacular and the owners are amazing in this sport. It is a great group of people, and we are encouraged and inspired to take this sport to the next level.”

As for the fantastic turnout for a first-time event, Bellissimo said this is just the beginning of the vision to bring the sport to the forefront of equestrian competition. “We want to make eventing a major force at all of our venues. We’re talking to a number of different sponsors and we really want to elevate the sport. We’re fired up to take this sport to the next level and are excited to work with other organizers and organizations so that we can make something really interesting here,” continued Bellissimo. “There is a great trajectory, and we’ve already been approached by new sponsors and owners wanting to get involved. This event will only get better and we are anticipating that the prize money will double, as well as the charitable gifts we were able to give. I am very excited about this sport and this group of people. I was honored to see this incredible group of athletes perform at such a high level in an experimental venue.”

Bellissimo was proud to award the owners of the top three placed horses large charitable donations. Aside from their earned prize money, they will be able to donate to any 501c3 charity of their choice. “We are so thankful to the sponsors for giving us an opportunity to host an event like this. Asheville Regional Airport stepped up in a very big way very quickly, and Land Rover is always a great partner of ours. Allyn Mann and Adequan® have been spectacular, as has our longtime partner Rolex,” Bellissimo said. As for the future, there are big plans on the horizon to host fully recognized FEI events, with a CCI3* being held in Tryon in August and the hopes of hosting the country’s second CCI4* event, aside from Rolex Kentucky CCI4*, at Tryon International Equestrian Center as well.