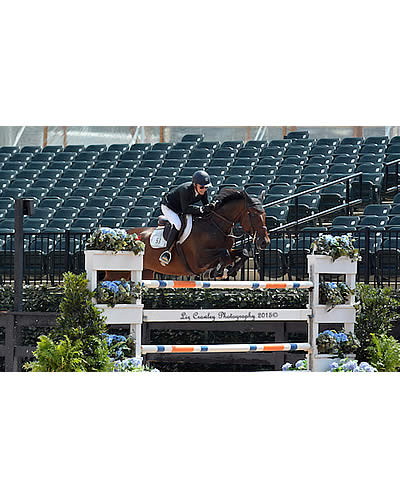 Mill Spring, NC – July 17, 2015 – With a rest from FEI competition today, Tryon International Equestrian Center (TIEC) was abuzz with Open, Junior, and Amateur jumper divisions throughout the day in the George H. Morris Arena at Tryon Stadium. Candice King of Wellington, FL and Cuchica, owned by Wyndmont Inc., topped the $10,000 Open Jumper 1.45m presented by Horseware Ireland. Kimberly Prince of Hume, VA and RMF Fara van de Maltahoeve finished in second with a time of 40.916 seconds and Richie Moloney of Wellington, FL collected third place aboard Ypaja Yando with a time of 42.774 seconds. FEI competition continues tomorrow at TIEC with the $127,000 Grand Prix CSI 3* beginning at 8pm. Gates will open to the public at 6pm.

King and Cuchica, a 2007 Dutch Warmblood gelding (Nintender x Luchica), laid down an early clear round, going second in the order and secured a double clear performance with their time of 40.852 seconds in the jump-off, which proved to be uncatchable.

“I’ve been riding him for six weeks now and he just moved up to this height about a week ago for his first 1.45m class and I’m so pleased with how he handled it today,” said King. “Manuel [Esparza] builds very well and I knew that it was going to be a strong ride. He doesn’t always need to build the biggest courses because they’re always strong solid courses.”

After forming a partnership over the past few weeks, King is thrilled with the way Cuchica has held his own in the bigger classes and is confident the gelding will continue to progress and improve, ultimately campaigning through the highest levels of grand prix competition.

“I knew I was going to have to be there for him throughout the course because I don’t want to put him in a bad situation at eight years old. He’s so honest I think he has everything you look for in a big time horse,” she explained. “I’m really excited for him and he just checks all of the boxes. When I walked it, I knew that I needed to be on my game.”

“I feel really comfortable with him and I was quite excited to go in there show him off. He’s incredibly talented and he has a very bright future,” she added.

King made a bold inside turn in the jump-off, which was untested by any competitor before she took to the ring. The risk was rewarded, as the turn helped to shave seconds of the clock and clinch the win.

“When I walked it with Michael [Dorman], we walked the turn and it seemed very doable. When I got to the in gate and saw it, it seemed like it may run a little tight and I didn’t want to over face him,” she explained. “Nobody was doing it and I asked around and didn’t get an overwhelming response about going for it and when I went in, my first goal was to go clean and then he just felt so great that I knew that I could take the shot. He answered the question and was right there with me. It felt really exciting for a nice young horse to step up in a class and moment like that.”

King also placed second in the $2,500 USHJA Hunter Derby aboard All the Talk, owned by Mershad Stables, LLC, earlier in the morning. In her first hunter derby since 2008, King rode two beautiful rounds, which landed her just half a point outside of the winning position.

Kelsi Okun, 17, of Mclean, VA, captured her first hunter derby victory in the $2,500 USHJA National Hunter Derby at Tryon Summer 4. Okun, aboard her own Consigliere, a 2006 Dutch Warmblood gelding (Landlord x Famine De Thurin), scored an 85 in the first round and returned to the Reynolds Family Ring receiving an 86 in the second round, for a total score of 171. Candice King and All the Talk received a total score of 170.5 and Missy Yoder aboard Too Much Fun collected third, receiving a 169.5.

Okun was ecstatic to finish the class victorious, as the duo placed eighth in last week’s $5,000 USHJA National Hunter Derby and felt they had put in two improved rounds today.

“This was my horse’s first neck ribbon ever and it just feels so special. He’s come such a long way since when we got him almost three and a half years ago,” she said. “It’s just an unreal feeling and I’m so excited for him to have gotten to this point.”

“The course was really straightforward and it made me focus on being accurate and showing off his derby stride, which I would say is a real highlight in his movement. I wanted give him the best ride possible because he’s a really cool horse and in the handy I just tried to be as neat as possible,” she continued.

The duo entered the handy round of competition in the third place position and Okun knew she would need to ride an accurate and smooth round to make up their four point deficit.

“I knew that there was a significant amount of points we needed to get to the lead and two people in front of me, so I needed to try and keep it as tight as possible if I wanted a chance to win it,” she explained. “This is the first year we’ve been really competitive because he had an injury that kept him out last year, which was disappointing, but he’s just been incredible so far this season.”

Okun’s ultimate goal is competing in a USHJA International Hunter Derby and has her sights set on it with Consigliere in the near future. “This is a really good step for us in that direction to get some experience and he’s just a sweet horse and wants to please. He’s built to do derbies and we wanted to make sure that we took advantage of everything the facility has to offer during our time here.”

Competition at TIEC continues tomorrow with the highlight $127,000 Grand Prix CSI 3* with gates opening to the public at 6pm and the competition beginning at 8pm. TIEC will also host an antique car show alongside the competition, which is open to the public. For more information about TIEC and for a full list of results, please visit www.tryon.com. Please “Like” the TIEC Facebook page at https://www.facebook.com/pages/Tryon-International-Equestrian-Center to be eligible for various contests and promotions.