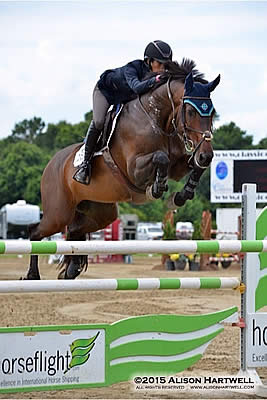 Week II of the Charleston Summer Classic opened up on Tuesday and the action has been non-stop! Wednesday the $5,000 Open Welcome, presented by Finish Line, got the party started.

The United Kingdom’s Gemma Paternoster, now of Wellington, Florida, won the class with her own Zonneglans after posting double clear rounds in times of 76.774 and 37.900 seconds.

Paternoster returned for the fourth place honors in the irons of Julie Lee’s Osiris with double clear rounds in times of 81.325 seconds and 41.603 seconds.

Fifth place was awarded to Timothy Maddrix of Birmingham, Alabama and Baily Martin’s Contador De Bornival, who turned in a clean first round effort in a time of 78.791 seconds and a second round time in 35.358 second. An unfortunate rail in their second round gave them four jump faults.

Krisley Hill Equine’s Calligraphy, ridden by Haley Lubow of Nashville, Tennessee, took sixth place after posting a clear first round in a time of 81.196 seconds and a second round score in 41.321 seconds with four jump faults.

The fastest of the four-faulters, Matilda, owned by Abigail Baskind and ridden by Emily Hertz of Cordova, Tennessee, placed seventh after posting a first round time of 76.108 seconds.