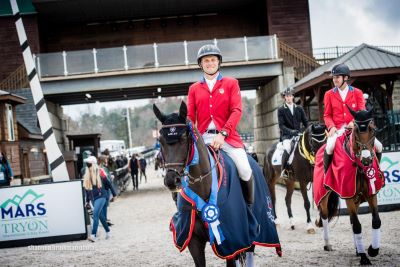 Mill Spring, NC – November 15, 2020 – The MARS Tryon International Three-Day Event concluded at Tryon International Equestrian Center and Resort (TIEC) after four days of international and national Eventing competition and showcasing the largest competition hosted on the East Coast in 2020. An incredibly close Show Jumping phase was undecided until the very end, resulting in a win for Boyd Martin (USA) and Tsetserleg in the BUCKEYE™ Nutrition USEF Eventing CCI 4*-L National Championship, laying down a clear round to hold the top spot and ending on a score of 28.10. In reserve, Phillip Dutton (USA) piloted Z, the 2008 Zangersheide gelding (Asca x Babouche VH Gehucht Z), to a clear round and a final score of 28.80 for T. Tierney, S. Roosevelt, S. Lacy, A. Jones, and C. Moran. Rounding out the podium and finishing on their Dressage score of 29.10, Woods Baughman (USA) and C’est La Vie 135, the 2008 Hanoverian gelding (Contendro I x Aarking XX) owned by Woods, Kim, and James Baughman, Jr., produced a clear round in Tryon Stadium to achieve the podium.

Just 0.10 points behind Baughman, Doug Payne (USA) earned fourth place with Vandiver, the 2004 Trakehner gelding (Windfall 2 x Mystic Replica XX) owned by Debi Crowley in partnership with Doug and Jessica Payne, while Elisabeth Halliday-Sharp (USA), the leader after Cross-Country, had a heartbreaking rail at the last fence aboard Deniro Z, the 2008 Dutch Warmblood gelding (Zapatero x French Buffet XX) owned by Ocala Horse Properties and the Deniro Syndicate, to drop to fifth place and a final score of 30.10.

Martin piloted three mounts through the course set by Chris Barnard (Millbrook, NY), and each went better than the next, he recalled. “I had a little bit of a rough start today. It got better and better. Luckily, I had three horses in it: Blackfoot Mystery was a little bit tired and had big gaps. For On Cue, I had two poles knocked over, and she’s usually jumping clear. Finally, the old campaigner ‘Thomas’ went into the jumps like a champion, so I’m thrilled because show jumping is the weak phase of his, and we’ve worked pretty hard at it. It was just very satisfying to get a good round out of him under pressure.”

Will Coleman (USA) and Chin Tonic HS sailed to a win in the CCI 3*-L Division, holding the lead all the way for a final score of 25.70 with the 2012 Holsteiner gelding (Chin Champ x Quinar) owned by Hyperion Stud LLC. In second, Boyd Martin (USA) piloted Contessa, the 2009 Holsteiner mare (Contender x Esteban) owned by Club Contessa, to a score of 25.90, adding nothing to their score all weekend, while Leslie Law (USA) improved from fourth place third with Lady Chatterley, the 2011 Holsteiner mare (Connor 48 x Mytens XX) owned by Lesley Grant-Law and Jackie and Steve Brown, walking away with a score of 27.80. Ending on fourth after a tiebreaker with Law, Ariel Grald and Caballe, the 2012 Holsteiner mare (Cliostro x Lansing) owned by Anna Elridge, also ended on a score of 27.80.

Coleman was piloting Chin Tonic HS through his first 3*-L and noted that he was still quite fresh after Cross-Country: “The Show Jumping went well, and my horse jumped great. He was looking around a bit when the wind started blowing and things like the flowers and fillers were moving. He still felt pretty fresh after yesterday!”

Elisabeth Halliday-Sharp prevailed in the Guardian Horse Bedding CCI 2*-L Division with Cooley HHS Calmaria, ending on their Dressage score of 28.30. Elizabeth Bortuzzo (USA) and Belongs to Teufer, the 2009 Thoroughbred gelding (Teuflesberg x Belong To Me) owned by John. A Witte, held steady to their Dressage score to end up in second on a score of 28.60, while the weeklong leader, Sara Kozumplik Murphy (USA) and Otta B Quality, Edith Rameika’s 2013 Dutch Warmblood gelding, dropped just one rail on course to land in third with a score of 29.20.

Halliday-Sharp and the 2013 Irish Sport Horse mare (Cyrano 145 x Chester Lass) owned in partnership with Cooley Farm have only been partnered since June of this year, she revealed, and found the win to be “a nice surprise” but one that only confirms the quality of the up-and-coming mount.

Jenny Caras (USA) and Trendy Fernhill carried their lead through to the finish in the CCI 4*-S division, adding 20.80 penalties for time to their Cross-Country run and still keeping the lead score of 47.80. In second, Joe Meyer and Clip Clop, the 2003 Irish Sport Horse gelding (Crosstown Dancer x Wolverlife) owned by Madison Foote, Theresa Foote, and John Meyer, cleared the White Oak Course with 12.40 time penalties for a total score of 48.50. Rounding out the top three, Nobie Cannon (USA) and Bust A Groove, her own 2004 Thoroughbred gelding (Busterwaggley x Groovy), were by far the closest to making the time on a muddy course, adding only eight time penalties for a total score of 52.20.

Caras mentioned that it was only the third advanced competition for the 2011 Irish Sport Horse gelding (Ars Vivendi x Cruising) owned by Elyse Eisenberg, and that the atmosphere only added some nice spark to an already nice Dressage test. “I was going for consistency and no mistakes, and I was happy with him overall,” she recalled. “He couldn’t have been better in the Show Jumping. I know that it can be hard to make the time in that ring, and he has a long stride and can be a bit slow, so I went in and rode forward. He’s such a great jumper and it’s nice to be able to just focus on the riding and the plan.”