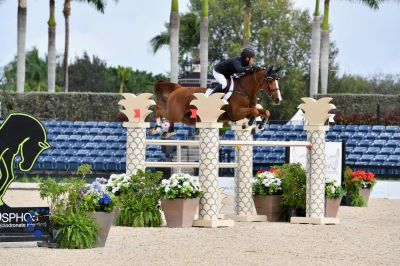 Putting in the best performance of the contest, Kent Farrington (USA) and Haity McNerney’s Kaprice rode away with the lion’s share of the prize money as the quickest double-clear pair ahead of a 16-horse jump-off. In the afternoon’s $25,000 JTWG, Inc. National Grand Prix, Santiago Lambre of Wellington, FL piloted his own Mick Jagger to the top of the leaderboard.

“I have an exceptionally fast horse,” reflected Farrington on his winning mount, Kaprice. “If you look at her on the ground she almost looks like a racehorse. She is really light, really lean, and her footspeed across the ground is incredible. She is an unbelievably careful horse, maybe the most careful horse I have ever ridden. She does not want to touch jumps, so that’s a big advantage. She is stepping up to be a grand prix horse, and I tried to use her in some bigger grand prix classes this summer. My plan now is to keep growing her, and hopefully I can have a real grand prix horse there at the end.”

As the very first to go, Tanner Korotkin (USA) and Country Boy were the trailblazers with a foot-perfect ride to set the example, and soon Flo Norris (GBR) and Lorielle 2 forced a jump-off as the second clear pair. As the class progressed over course designer Guilherme Jorge’s (BRA) track, 14 more challengers turned in fault-free rides to bring the total number of pairs advancing to the jump-off to 16. The duos eligible for the short course round represented the United States, Great Britain, Ireland, Mexico, Dominican Republic, and Brazil, with the home nation leading the way with the most returners. Farrington was one of the last to qualify, which would allow him to watch how the short course rode prior to his turn over the jump-off track.

Korotkin and Country Boy once again set the standard with a clear ride in 44.22 seconds, but the lead continued to change hands a number of times throughout the tie-breaker round. With six left to ride, the pace had been pushed up to 39.98 seconds by Leslie Howard (USA) and Donna Speciale. Second-to-last to take to the ring, the always-speedy Farrington and Kaprice, a 2010 Belgian Warmblood mare, galloped around the pattern without letting off the gas, tripping the timers in 39.28 seconds with no faults to rise to the top of the standings. The final pair to ride, Brian Moggre (USA) and MTM Vivre Le Reve, owned by Major Wager LLC, turned in a valiant effort to try to eclipse the leaders, but fell slightly short with a clear time of 39.79 seconds to settle for second place and confirm Farrington and Kaprice as the champions. Howard and Donna Speciale finished the day in third position. In total, 11 partnerships out of the starting list turned in two clear rides.

“I feel very fortunate that our sport is able to continue during difficult times, and hats off to the whole team here that is keeping the show running,” noted Farrington of returning to international competition in Wellington. “I think we are all very grateful and fortunate that we are still holding high-level competitions here in Florida.”