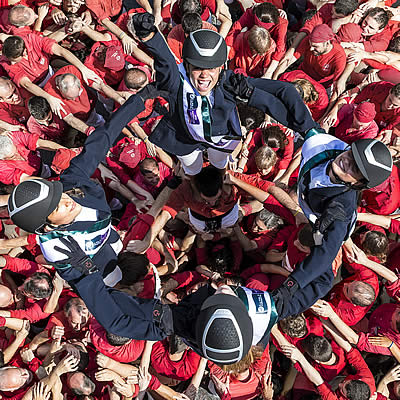 Barcelona’s most celebrated “human tower” builders, the Els Castellers de Barcelona, have pulled out all the stops to welcome the world’s best Jumping athletes to the Furusiyya FEI Nations Cup™ Final 2015, which starts in their legendary city this Thursday, 24 September. (Liz Gregg/FEI)

Lausanne (SUI), 23 September 2015 – Barcelona’s most celebrated “human tower” builders, the Els Castellers de Barcelona, have pulled out all the stops to welcome the world’s best Jumping athletes to the €2.3 million Furusiyya FEI Nations Cup™ Final 2015, which starts in their legendary city this Thursday (24 September).

Gathering in Barcelona’s Plaça Sant Jaume in the middle of the Gothic Quarter, home to the most important buildings in the lives of the people of Barcelona and Catalonia, the Els Castellers de Barcelona built a human tower wholly dedicated to the prestigious Furusiyya FEI Nations Cup™ Final.

A total of 120 members of the Els Castellers de Barcelona between the ages of six and 70 built the symbolic human tower to showcase a shared set of deep rooted values.

“The team concept, and the understanding that together we’re stronger, applies just as much to the teams competing at the Furusiyya Final as it does to the Castellers when they’re building their incredible human towers,” FEI President Ingmar De Vos said.

“The Castellers literally embody the concept of team building, and that team spirit is equally important in equestrian sport. It’s all about trust. There’s the team of human and horse, one of the oldest and strongest partnerships in the world, and then there’s the national team, the four riders and their horses that come together to represent their nation with pride at the Furusiyya Final in Barcelona. It’s a really powerful combination.”

“The Castellers are core to the fabric of Catalonia and especially to Barcelona, which is world-famous for its football, food, architecture, energy and of course horse sport,” explained Daniel Garcia Giró, Event Director of the Furusiyya FEI Nations Cup™ Final 2015, which takes place this week at the Real Club de Polo de Barcelona, venue for the equestrian events at the Barcelona Olympic Games in 1992.

“By their very nature, the human towers are striking, powerful, emotive, and the relationship between the tower members is critical for success, exactly like horse sport.

“Here in Barcelona, human towers are in integral part of our cultural identity, and here at the Real Club de Barcelona, horse sport is just as central to the fabric of our community.”

“It has been a great honour for the Castellers of Barcelona to take part in this event as our personal and most sincere tribute to the CSIO Barcelona, a popular event that goes beyond sports and represents values shared with our community, and to the FEI which brings us to a global audience,” said Daniel Dávila Montes, President of the Els Castellers de Barcelona.

To celebrate the countdown to the Furusiyya FEI Nations Cup™ Jumping Final 2015, and the incredible Castells, or human towers, which have been on UNESCO’s Intangible Cultural Heritage List since 2010, the FEI has specially commissioned a stunning online photobook: http://fei.org/reportage/castellers. Share the photo book and the striking series of 19 human tower images available for download here: http://goo.gl/RRPrbA, using password FEI2016 using dedicated hashtags #FEINationsCupFinal, #Furusiyya, #SupportYourNation.