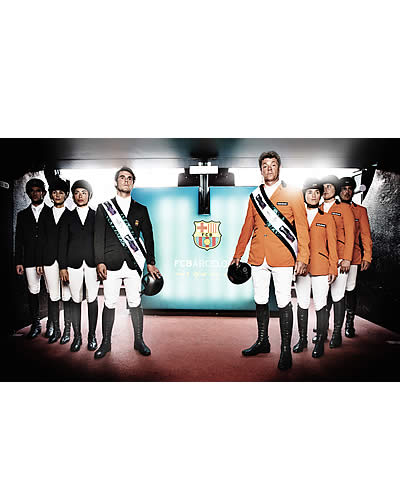 Watch Dutch superstar, Jeroen Dubbeldam, and Spain’s leading rider Sergio Alvarez Moya as they lead the battle of the giants onto the hallowed turf here: https://youtu.be/68n6YzSeHS0. It’s going to be a thriller!

Former Olympic and reigning World and European champion Dubbeldam and Alvarez Moya had determination written all over their faces during behind-the-scenes filming at Camp Nou. The Spaniard said that day, “When it comes to the Furusiyya Final in my home country, I will be giving it 100 per cent!”

How the teams line out

A massive field of 19 nations has qualified for the event that will decide the fate of the 2015 Furusiyya title when the action draws to a spectacular close next Saturday night.

Team Poland will be first into the ring when the Furusiyya Final 2015 gets underway tomorrow afternoon at the Real Club de Polo in Barcelona (ESP).

The draw took place today, and the order-of-go for tomorrow’s first competition is as follows:

It’s a tough call for the Polish side who battled hard to qualify from the Europe Division 2 qualifying series along with Czech Republic. However, Dutch Chef d’Equipe, Rob Ehrens, insisted this evening, “There is nothing between the teams when the competition begins tomorrow; every country has the same chance.”

His side is the firm favourite to take their second Furusiyya title in a row, however. Ehrens has brought the dream-team that began an extraordinary sequence of victories when scooping team and individual gold at the Alltech FEI World Equestrian Games™ 2014 in Normandy, France last September. They were back on the top step of the podium at the 2014 Furusiyya Final the following month and, just a few short weeks ago, swept all before them at the FEI European Championships 2015 in Aachen (GER). They seem like an unstoppable force right now.

With typical modesty, however, Ehrens insisted this evening that the anything can happen over the coming days. “We have already achieved more than we could ever have imagined; it has been incredible what has happened for us over the last year. But we all keep our feet on the ground. The difference between winning and losing is so very little; we have returned to Barcelona to do our best job, but a couple of mistakes tomorrow and it could all be over already. That’s our sport. We embrace the moments when it goes well, but we always stay grounded,” said the man who is widely admired for his exceptional team leadership.

All 19 nations will line out in tomorrow’s opening class from which the top eight countries will qualify for Saturday night’s €1.5 million Final. The teams that don’t make the cut will compete in Friday’s €300,000 Longines Challenge Cup.

This year’s line-up of nations underlines the success of the concept that inspired the Furusiyya series, drawing more and more countries into the sport of Nations Cup Jumping and watching them develop and grow. Few could have guessed that revitalizing a much-loved format with a history that goes back for over a century would be such a success story. It met with some resistance at first but, in its third season, the series that was once restricted to an elite group of nations has expanded and thrived to such an extent that a total of 45 countries participated in 19 qualifiers across six regions worldwide this year.

As FEI Jumping Director, John Roche, said this evening, “We have great representation here in Barcelona from all across the globe this year, and we also have many of the best riders in the world.”

Watch the making of the FC Barcelona video here: https://youtu.be/HmPBZrYp1Ks.