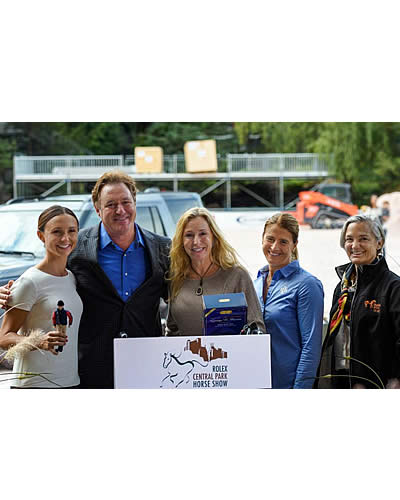 “Last year, the inaugural event was an incredible success,” stated Bellissimo. “We really would like to use this event to create a world stage for equestrian sport – there is a great opportunity for us to raise the awareness in this country and there is no better place to do that than in New York City. I think this will continue to grow as one of the top events in the sport over time.”

“As a rider, I’m really excited about this event. It’s a fantastic week not only for Show Jumping, but now also for Hunters, Dressage and Arabians and I’m so proud to be a part of it,” said Bloomberg. “As a New Yorker, I look at the skyline and really appreciate both the surroundings and being able to ride in such an incredible venue.”

Decorated dressage rider Tinne Vilhelmson Silfvén of Sweden will compete at the Rolex Central Park Horse Show for the first time this year, and like Bloomberg, she is eager to participate in the second horse show held in Central Park since 1981.

“I’m incredibly excited to be here. As a kid I always loved New York City and enjoyed coming here, but I never imagined that one day I would have the opportunity to ride here,” she said.

While Silfvén admits she is in awe of the city, she maintains that the horses should handle the location with ease. “The atmosphere is exciting, but as all of the bigger shows have grown in size and scale many of the horses competing at this level are used to it,” she added.

The mounts of Bloomberg and Silfvén, who will arrive in New York City in the coming days, are in good company with the horses that call New York City home. Members of the NYPD Mounted Unit were on hand at Tuesday’s press conference to showcase a different kind of equine presence at the Rolex Central Park Horse Show. The NYPD Mounted Unit is one of six charity beneficiaries of the event alongside the Central Park Conservancy, City Parks Foundation, GallopNYC, NYC Parks Enforcement Mounted Auxiliary Unit and The Police Athletic League.

Bellissimo has found success at his Florida-based horse show with an event called the Great Charity Challenge, which has raised more than $8 million in the past six years for charities within Palm Beach County. He has continued the charitable endeavors of IEG at the Rolex Central Park Horse Show, giving a minimum of $30,000 in donations this year.

Alicia Kershaw, who is the Executive Director of Gallop NYC, a therapeutic riding program based in New York City, spoke to the presence of equestrian-based programs within the city and how pivotal donations are to organizations like GallopNYC.

“We help people with disabilities walk, talk, and learn so that they can live their lives as fully and independently as possible,” she said. “Two-thirds of our riders cannot afford to pay our fees. Disability can be a impoverishing circumstance for a family and so we very much welcome the financial support, but we also feel that we have a mission to show New Yorkers that horses are good for people. We are thrilled to be a part of an event that showcases horses in New York.”

As the 2015 Rolex Central Park Horse Show gets underway this week, Bellissimo is already confident that the event has a bright future in New York City. “It costs several million dollars to host this event and it’s a long-term opportunity to make it a success,” he said. “We’re committed to doing just that over the next seven or eight years.”

Tickets for all events at the 2015 Rolex Central Park Horse Show can be purchased at http://bit.ly/1AV2imv.

Launched in September 2014, Rolex Central Park Horse Show is the first-ever outdoor, multi-day equestrian sporting event in New York City, showcasing some of the best show jumpers and dressage riders in the world as they vie for top prizes against a backdrop of skyscrapers in one of the world’s most iconic venues. As the event founder, Mark Bellissimo is the CEO of Equestrian Sport Productions and International Equestrian Group LLC; Managing Partner of Wellington Equestrian Partners (WEF), Tryon Equestrian Partners and Colorado Equestrian Partners; and Publisher of The Chronicle of The Horse magazine. In its second year, Rolex Central Park Horse Show will make its triumphant return from September 23 to 27, 2015 and will feature five days of multi-discipline equestrian sport and performances, ranging from Arabians and Dressage to Hunters and Show Jumping. The Rolex Central Park Horse Show will also host the inaugural U.S. Open in the following categories: Jumpers, Dressage, Hunters, U25 Jumpers, and Arabians. For more information, visit http://centralparkhorseshow.com, on Facebook at https://www.facebook.com/CPhorseshow, and follow @cphorseshow on Twitter and Instagram.