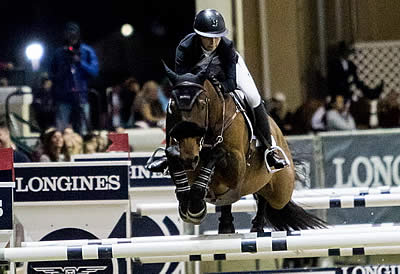 When Zazou Hoffman (USA) was asked whether the Longines watch that sat before her was her first, her initial response was a dead giveaway: “I get to keep the watch?”

“Tonight was super exciting for me. I have a lot of amazing things to say about my horse and how lucky I am to have him. In the jump-off, he was incredible! Everything came up kind of just by moving forward.” — Zazou Hoffman (USA)

Clear rounds were hard to come by in the first round. In fact, the first faultless performance did not come until Menezes and Quintol jumped at 22nd in the order. The pair, veterans of the 2016 Rio Olympic Games, used their experience to their advantage and put the pressure on when first to go in the jump-off, and Hoffman formulated her plan based off their smooth execution. She followed up Menezes’ round with a confident, flowing ride of her own, which was highlighted by a tidy turn back to the jump-off’s third fence and a bold, time-shaving angle to the wall that came two fences later.

“I think I based my plan off of watching Eduardo,” she said. “I hadn’t really considered how fast or not I was going to go. After watching him, I realized I was going to have to be quite quick. I’ve ridden a lot of jump-offs this year on Samson with 4 faults, and I know that I can trust him and go fast, but it’s just that fine line of risking too much. I did one extra stride than Eduardo to first line, and then my turn backs were quite tight. I took a little bit of a risk to the wall, and that’s where I think I saved a little bit of time.”

After earning 12 points in Vancouver, Hoffman skyrocketed to the top of the west coast sub league standings of the Longines FEI Jumping World Cup™ North American League with her win under the lights in Del Mar; she has 32 points through three legs. Eve Jobs (USA) sits second with 31 points, and Uma O’Neill (USA), winner of Vancouver’s qualifier, is third with 24 points.

Bloomberg, meanwhile, moved into second in the east coast sub league standings. She has 28 points, one behind leader Molly Ashe Cawley (USA), who won New York’s qualifier. Bloomberg is six points ahead of Mattias Tromp (USA), who sits in third with 22 points.

“I had shown out here a couple years ago, and I’ve loved being out here,” she said. “It’s fun to be in a different environment with different people and a great crowd. We always jump at the opportunity to come out here and show, but part of it is also that my goal is really to qualify for World Cup Finals now that I have the right horse.”