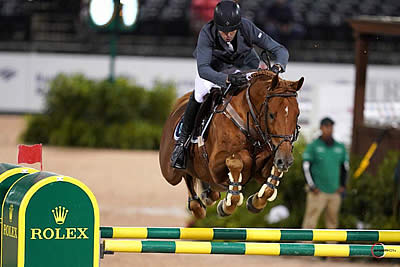 Only three riders returned to the short-course, designed by Anthony D’Ambrosio (USA), and Swail maintained the pair’s stronghold on the lead. The duo was the first to go clear and Swail noted his plan going into the first round. “My horse has had a great year so far and he was coming in here with a lot of confidence. I thought that the time was going to be a little bit of an issue for me, but thankfully I squeezed just inside it.”

Swail continued, “It started off a little scratchy for us at the start. I think it was because we haven’t competed in five weeks. The second half of the round he jumped beautifully. We squeezed just inside the time, but thankfully there weren’t many more in the jump-off.”

Trailing behind Swail was fellow Irishman Paul O’Shea, who scored another second-place finish aboard Skara Glen’s Machu Picchu, after coming off a podium placing in last weekend’s Grand Prix CSI 3*. “I saw Conor go on the screen,” explained O’Shea, “and he didn’t look really fast, but he was really fast and is always really fast, so that didn’t tell me much, really. My horse has been jumping really well this year and we have been competing in Nation’s Cups all year. He won the Grand Prix here exactly a year ago and that was the last time we went this fast. He’s had a great year and it’s nice to finish with a result like this.”

Much like Swail’s mount, Engle noted that third place mount Royce is also coming off of a bit of down time. Despite this, the stallion remained swift and competitive, landing on the podium with promising results. “Royce felt great,” stated Engle. “In the first round he jumped amazingly. He was way up and over everything, and I think it look a little bit out of him. It was his first time back under the lights in a while. I think I got a little hungry. He’s been second like the last five or six Grand Prixs I’ve been in, so I took a little maybe too much of a shot at the third fence at the vertical. That one he rubbed light and then after that I think he just kind of emptied out. The first round he felt amazing and right on game.”

All three competitors echoed their gratitude toward their mounts, elaborating on the fact that each will get a week off as they plan out their next stops on their calendars. Swail concluded, “My two guys that I have here are heading over to have a week off next week, then they are heading to Lexington and then up to Toronto. After that, we will go to Florida and that wraps up the year.”