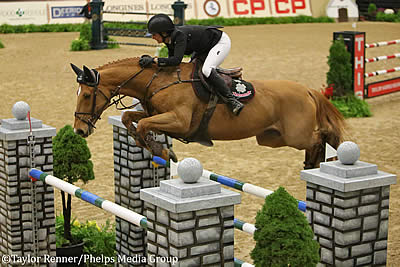 Lexington, KY – Oct. 24, 2018 – The 2018 National Horse Show promises to be thrilling with top notch international competition! Adding to the excitement will be the participation of 2018 World Equestrian Games Gold Medal athletes, McLain Ward, Laura Kraut, Devin Ryan, Adrienne Sternlicht, and Beezie Madden. Team USA performed in top fashion during the World Equestrian Games, which was held at the Tryon International Equestrian Center in September. Athletes who participated in the games are ones that are well-known throughout the equestrian community, especially now as they bring home the first ever WEG team gold medal for the United States. However, they have also been familiar faces at the National Horse Show for many years.

Reserve athlete, Beezie Madden, piloted HHS Hercules to the victory in the $35,000 Salamander Resorts & Hotels Accumulator class in 2017, while Kraut was close on her heels in second place, and Devin Ryan secured third. Madden was also third in the $130,000 CP Grand Prix in 2017. Madden is known for her terrific display of athleticism with Cortes C in the 2014 $250,000 Canadian Pacific Grand Prix. She secured her place as part of the 2018 WEG team at the Longines FEI World Cup™ Jumping Final earlier this year, as she emerged victorious all three days of competition.

Fan favorite McLain Ward has also been successful in the Alltech Arena during recent years. In 2012, he captured the victory in the $250,000 Alltech Grand Prix. He was then featured as a judge for the 2014 ASPCA Maclay Finals. Ward rode to fifth place in the 2016 $250,000 Longines FEI World Cup ™ Jumping Lexington and continued to move up the ranks to become the 2017 Longines FEI World Cup™ Jumping champion. In the lead up to the World Equestrian Games he has embarked on a journey that has included grand prix victories, including the $250,000 Sapphire Grand Prix of Devon for the tenth year in a row as well as capturing the $382,000 Longines Grand Prix of New York during the Longines Masters of New York. Ward finished fourth behind teammates Beezie Madden and Devin Ryan at the 2018 Longines FEI World Cup™ Jumping Final. At this year’s WEG in one of the most nail-biting finals, Ward pulled off a spectacular jump-off with Clinta to secure the team gold for USA over Sweden. His performance throughout the week delivered him a top five individual medal as well.

Young star Adrienne Sternlicht has competed at the National Horse Show as both a junior and professional and captured her first victory at the National Horse Show in 2015 when she won the Show Jumping Hall of Fame Jumper Classic Series Final. As Ward’s student, she has always been hot on his heels and finished only two spots below him in the 2016 $250,000 Longines FEI World Cup ™ Jumping Lexington. As the youngest on the team, Sternlicht acquired her first WEG medal and held an impressive 11th place in the overall standings out of the 124 competitors.

2018 was unquestionably a break out year for Devin Ryan. His string of success included a one-two punch to emerge victorious in the $35,000 CSI3* Longines World Ranking Class at Live Oak International and secured the U.S. to both first and second place by winning the reserve at the 2018 Longines FEI World Cup™ Jumping Final. Last year, Ryan had multiple top ten finishes the National Horse Show including a 3rd place finish in the $35,000 Salamander Accumulator Class, 5th place in the $250,000 Longines FEI World Cup ™ Jumping Lexington, and an 8th place in the $130,000 CP Grand Prix.