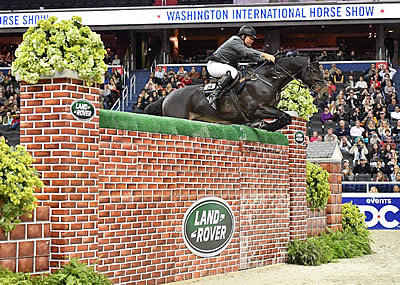 Washington, D.C. – October 26, 2018 – The 60th Washington International Horse Show (WIHS) continued on Friday, October 26, with some of its most exciting competition yet, featuring the $50,000 International Jumper Speed Final, won by Georgina Bloomberg of New York, NY on Paola 233. Reaching great heights with victory in the $25,000 Land Rover Puissance were Aaron Vale of Williston, FL and Finou 4. The classes were part of a full schedule of exciting competition and entertaining exhibitions during Military Night, presented by Caterpillar, Inc.

The $25,000 Land Rover Puissance is one of the most popular classes at WIHS to attend, and Friday night’s feature class didn’t disappoint. Aaron Vale and Finou 4, owned by Thinks Like A Horse, jumped to a height of 6’11 ½” to capture victory for the third year in a row.

With a small field in the class, it came down to two very game riders that kept going over five rounds of competition. The wall started at 5’9” and was raised to 6’2”, 6’6”, 6’8 ½”, and finally to 6’11 ½”. Vale and Finou 4 stayed clear, while Andy Kocher and Blaze of Glory II, owned by Erica Hatfield, made it to the final round before knocking blocks off the top of the wall to finish in second place.

“I was just hoping somebody could hang in there a while, so we could get a decent class for the crowd. It was great. Andy’s horse jumped it well and hung in there until the last round. It made a really good class and worked out the way that I wanted. I got a little competition, but I still got the blue!” – Aaron Vale

This is Vale’s fifth win in the puissance class at WIHS, with previous wins coming in 1996 with Big Joe, in 1998 on Happyness, and now three consecutive years with Finou 4, who seems to have a certain something that makes him successful over the big wall – despite blindness in his left eye.

“He’s got a lot of ability,” said Vale of the 12-year-old Hanoverian gelding by For Pleasure. “He’s very limber, plus he’s got a lot of power, so it just seems to be easy for him. I think they could keep raising it, and I’d keep riding him to it.”

Bloomberg used Paola’s natural ability to rise to the top of the class.

“She has a good enough stride, but she doesn’t need to leave out strides. She’s really quick in the turns, and she’s very quick in the air. Given the option, I always play it safe, and I add a stride because I know I can be quicker other places. Really any of the other options of leaving out strides I didn’t love for her. I felt like I could just be quicker by turning and using her natural speed.” – Georgina Bloomberg

With a light competition schedule since the Hampton Classic Horse Show in late August, Bloomberg aimed Paola for WIHS.

“We brought her here with these two [speed] classes at WIHS in mind. This was my goal for her.”