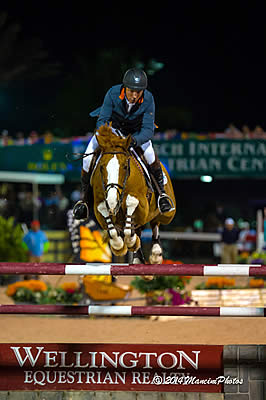 Anthony D’Ambrosio of Red Hook, NY set the track for Saturday night’s grand prix competition under the lights with 32 entries and five clear rounds to jump-off. Alexander Zetterman was first to jump-off aboard Springfield Showjumpers’ Zidane and cleared the track in 46.95 seconds to eventually place second. Sarah Wayda and her horse Faroukh jumped next and went clear in 48.37 seconds for third place honors. Wilhelm Genn and Eduardo Leon’s Bugatti followed with the winning clear round in 45.11 seconds. Sophie Simpson and Simpson Showjumping, Inc.’s Why Not were faster in 42.12 seconds, but dropped a rail on course to finish fourth, and Michael Dorman and Wyndmont’s Valinski S made it to the jump-off, but retired after trouble at the first fence.

Class winner, Bugatti, is an eight-year-old KWPN gelding (Heartbreaker x Pilot) that Wilhelm Genn has brought along since his four-year-old year. Saturday night was the horse’s first time showing outside under the lights and a great step in his development, according to his rider.

“The first grand prix here he was a little nervous and then he settled, and then the last grand prixs he jumped clean and was third and seventh, but those were daytime,” Genn explained. “He felt really good. He still has a very young mind, but he is getting better and better and better. His body is a little slow, but his mind is very active, so I am just trying to figure out how to connect that all. Even tonight, I felt that he was really ready and I was very excited to do him in this class, but you never know.”

“He is a very careful jumper and he can still get very green at moments, so I wasn’t sure what was going to happen,” Genn detailed. “He was a little nervous in the first round. He was very excited, and he was fascinated with the jumbo-tron. Every time I went by he just kept staring, and I couldn’t get his head over. He was very playful in the warm-up. He laid down all morning and that was a good sign. My horse Happy used to do that. If she laid down on grand prix day, it was a good sign, and he has started to do that too. He won one other grand prix this summer, and he laid down also on the same day. It’s just little things like that. In the jump-off he felt amazing. He felt green in the first round, just insecure, but in the jump-off he felt super.”

Detailing his round in the short course and where he made the time over Zetterman, Genn stated, “I did six strides to the combination, and that was it. From the beginning, I thought the winner was going to do six there; I just didn’t know I was going to be the one. I was not sure if I could do the six because you never know where Bugatti is going to be on the next stride because he is still so inexperienced, but I told myself if I kept the oxer going forward out of the turn, I could keep going in six and it worked out.”

Commenting on the course, Genn noted, “I thought it was a beautiful course, especially for a younger horse to move up. The jumps were a nice height. They weren’t too big, because you have the lights as a factor, and you probably had a lot of younger horses in tonight and some younger riders. I was very happy when I walked it. I wasn’t sure if I was going to get a piece, but I loved it for my horses. Anthony built beautifully all week.”

Genn plans to stay in Wellington through April to compete at the 2015 Winter Equestrian Festival, which begins on Wednesday. He is excited to develop his horses throughout the circuit.

“My plan is to now scale it back a little bit with the two young horses, Bugatti and the mare, Welcome Cor,” he stated. “They have done very well, and I don’t want to overwhelm them. They will take a little break and then do some 1.45m and 1.50m classes, then maybe some of the Thursday or Friday grand prixs and then go from there. They are very young still, and I like to produce them so they last for a long time.”

Earlier in the week, the $10,000 Equiline Open Stake was held on Thursday with a win for Aaron Vale and Quidam’s Good Luck, owned by Troy Glaus. Thirty-eight entries showed in round one, with 19 clear rounds to advance to the jump-off, and ten double clear rounds. Vale and Quidam’s Good Luck completed the fastest double clear in 37.01 seconds for the win. Todd Minikus took second and third place honors, riding Carl Brem’s Cordonos through the timers in 37.77 seconds, and finishing in 38.62 seconds aboard Two Swan’s Farm’s Arino du Rouet.