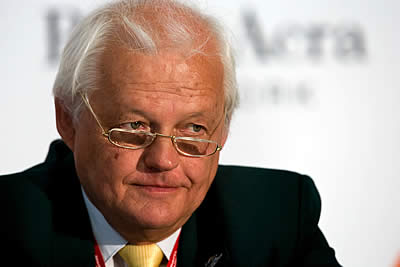 Wojtek Markowski (POL), who has passed away at the age of 67, will be remembered for his many years of dedication to Dressage. (Arnd Bronkhorst/FEI)

Lausanne (SUI), 7 January 2015 – Wojtek Markowski (POL), FEI 5-star Dressage Judge and Technical Delegate (TD) at the London 2012 Olympic Games, passed away on 5 January after a battle with cancer. He was 67 years old.

He judged at his first Olympic Games in Athens (GRE) in 2004, and he viewed his TD role at London 2012 as a major career highlight. He had also been appointed as TD for the Rio 2016 Olympic Games.

Markowski obtained his first riding instructor diploma from Poznan Academy of Physical Education in 1975 and became active as an international judge in 1982. By 1989, he had become a 5-star judge, and during his long association with the FEI he acted as Foreign Judge, Technical Delegate and Ground Jury President and member at numerous high profile FEI events, including the FEI World Equestrian Games™ in 2006 and 2010, FEI European Dressage Championships and FEI World Cup™ Finals.

Passionate about the development of Dressage, he was also one of the first judges to support the FEI World Dressage Challenge, which was created in 1982, and since judged at many of the events around the world.

In 2012, he was appointed board member of the European Equestrian Federation (EEF), where he proposed the creation of the EEF Dressage Working Group which he then chaired. He was also the Eastern & Central Europe representative for the International Dressage Officials Club (IDOC).

“No words are adequate to express the sadness we feel,” Secretary General of the Polish Equestrian Federation Łukasz Jankowski said. “Wojtek Markowski was a great person and international five-star Dressage judge, a great supporter of dressage in Poland and around the world, and a great EEF Board member.”

“Wojtek played a central role in judging and developing international Dressage in a career spanning over 30 years,” Trond Asmyr, FEI Director Dressage and Para-Equestrian, said. “He was one of our most active judges and had a brilliant statistician’s mind. Thanks to his sought-after expertise, he was due to head to his second consecutive Olympic Games as Technical Delegate in Rio in 2016. He has left a valuable legacy for international Dressage, and his dedication and passion for our sport will be very sorely missed.”

The FEI expresses its sincere condolences to Wojtek Markowski’s family and many friends, to the Polish Equestrian Federation and to the global Dressage community.