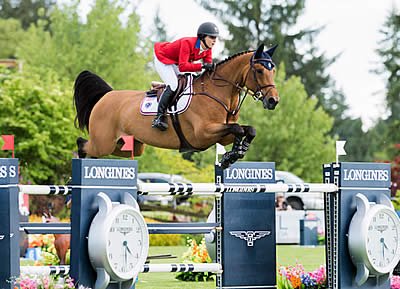 In a super-tight fight to the finish, Team USA pinned their Canadian hosts into runner-up spot at the third and last leg of the FEI Nations Cup™ Jumping 2017 North America, Central America and Caribbean League in Langley (CAN). The Americans established an impressive lead in the first round, but the Canadians fought back gallantly to add nothing to their scoreline second time out while Ireland lined up third ahead of Mexico 1 in fourth place.

There were just two qualifying spots at the 2017 FEI Nations Cup™ Final in Barcelona (ESP) up for grabs in this region and, led by their new Chef d’Equipe, former Belgian showjumping star Stanny Van Paesschen who only stepped into the role last week, Team Mexico lost out by a narrow margin. Lying second on the leaderboard behind USA after their superb victory on home ground last month, Mexico’s fourth-place finish saw them drop behind the Canadians in the final analysis.

“We knew coming here that this was going to be a free-for-all. Often it’s pre-determined who is going to Barcelona when you come to the last qualifier – not the case this time. The two teams who were going to make it… it was up to them to win it today.” — Robert Ridland (Team USA)

It wasn’t looking altogether optimistic from a US perspective when Heather Caristo-Williams (39) racked up 22 first-round faults with Qui Vive des Songes Z. But when Catherine Tyree (23) and Bokai lowered only the tricky vertical that followed the Longines triple combination at fence seven, and then both Adrienne Sternlicht (24) with the spring-heeled mare Cristalline and Margie Goldstein-Engle (59) and the power-house Royce went clear, they held the lead on a four-fault tally at the halfway stage.

The Canadians were 10 faults adrift as round two began, but when Tiffany Foster (Brighton), Christopher Surbey (Chalacorada) and living legend Ian Millar (Dixson) all went clear this time out they threatened for pole position.

Because Caristo-Williams added 12 more before Tyree hit the very last, and although Sternlicht’s single time fault steadied the American ship, Goldstein-Engle had only a fence in hand as she entered the ring, last to go. When the vertical after the open water hit the dirt the American supporters held their breath, but the US veteran added nothing more to cement the winning team total of 13 faults, while Canada completed with 14 on the board.

Margie Goldstein-Engle – Team USA (winners), talking about qualifying for the FEI Nations Cup™ 2017 Final: “It means a lot for us to be able to go to Barcelona; it’s a Championship and a lovely horse show.”

Robert Ridland – US Chef d’Equipe, talking about US team strategy: “This started months ago; we’ve had four Nations Cup teams so far this year and I think we’ve had 14 different riders. It’s been a plan; we have a lot of depth in our country but the depth needs experience, especially the younger ones, and this is exactly the type of team we plan to always have. A combination of veteran experience and young riders.”