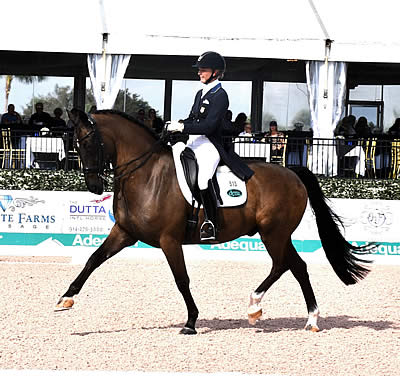 “I’m really so honored to compete in this event. It’s always such a huge honor to represent one’s country in international competition, and especially to get the opportunity to ride alongside the best of the best. As a rider, it’s definitely one of those moments that you are constantly working toward,” Bateson-Chandler stated.

Additional riders on the U.S. team for Uggerhalne include Shelly Francis of Loxahatchee, Florida; Kathleen Raine of Murrieta, California; and Mette Rosencrantz of Topanga, California.

No stranger to high-stakes international competition, Bateson-Chandler’s past career achievements include being a member of the Silver medal-winning Dutta Corp. U.S. Dressage Team at the 2016 Lambertz Nations Cup at CHIO Aachen, and being part of Team USA at the 2016 CDIO3* Odense Nations Cup in Denmark.

Earlier this year, Bateson-Chandler made a brilliant comeback aboard her well-known mount Alcazar, who had spent the summer months recovering from a serious colic surgery that took place after the two competed together in Aachen, Germany in the 2016 World Equestrian Festival CHIO. After a successful and emotional reunion at the Adequan Global Dressage festival in Wellington, Florida this winter, the pair drew much attention with an unforgettable winning performance in the event’s CDI4* Grand Prix Freestyle.

Aside from this year’s competition successes, Bateson-Chandler also added a new mount to her stable’s lineup – a six-year-old Oldenburg mare named Fine Time, who was secured for her by longtime sponsor Jane Forbes Clark. Bateson-Chandler also accepted an appointment to the new USEF Dressage Sport Committee, which is responsible for the sport’s development, organization, rules, and licensing changes.

Bateson-Chandler competes in Wellington, Florida during the winter months while training with U.S. Olympian Debbie McDonald. During the summer months, she and her horses travel to the United Kingdom to compete and train with acclaimed British Olympic Gold Medalist Carl Hester.

Through her business, KBC Dressage, Bateson-Chandler offers training and coaching services to horses and riders across the U.S. and Europe, as well as prospect selection for clients. For more information, visit her on Facebook and on the web at www.kbcdressage.com.