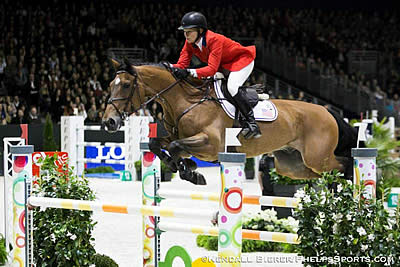 Lyon, France – The seven American riders that headed into the third and final leg of the 2014 Longines FEI World Cup Jumping Final produced determined efforts over two rounds to close out their week in Lyon. Frank Rothenberger set two demanding 13-obstacle tracks that produced a great shake-up of the leaderboard throughout the afternoon in Lyon’s Eurexpo. Twenty-seven of the world’s best horse-and-rider combinations started in Monday’s first round with 22, including all seven Americans, qualifying to return for Monday’s second leg.

U.S. Chef d’Equipe Robert Ridland was pleased with the effort put forward by all the American entries throughout the week, as his riders earned strong finishes for the United States for a second consecutive year.

“Our objective was to get as many in the money as possible (top 16) and we had five again in the money. A couple things didn’t go our way on Friday and again today, but we had a great second leg,” said Ridland. “We had a great mix of veterans and new riders, so to see these results, I’m pretty happy.”

Leading the way for the U.S. in Lyon were the 2014 World Cup champions Beezie Madden (Cazenovia, N.Y.) and Abigail Wexner’s Simon, finishing in seventh place on a total of 12 faults. The pair entered the day on a four-fault total in equal fourth place, but fortune was not in their favor as the 15-year-old gelding had light rubs in the first and second rounds resulting in rails at 8B and 5A in the respective rounds.

“I thought he went fantastic today. It was just a light rub in the first round and same thing in the second,” said Madden. “Seventh is still good; I came here hoping to be in the top five and I would have loved to win again, but I’m still really happy.”

The two-time Olympic Team Gold medalist is pleased with the form Simon is on and believes he is ready for more success in 2014.

“He came in prepared but not overly-prepared because we’ve got a big year ahead of us.”

Finishing in ninth place overall was U.S. team veteran McLain Ward (Brewster, N.Y.) on a total of 17 faults. In Monday’s first round, he and Sagamore Farm’s 13-year-old Warmblood gelding, Rothchild, jumped one of seven clears. They returned in the second round looking to jump double clear, but it was not meant to be as the vertical jumping into the triple at fence five came down to add four faults to their total.

Charlie Jayne (Elgin, Ill.) finished directly behind Ward in 10th place with Alex Jayne and Maura Thatcher’s Chill R Z on 23 faults. In round one, the 11-year-old Zangersheide stallion lowered rails at 6B and 13 for eight faults. The pair returned in the second round producing a masterful effort, collecting a single time fault after finishing .23 seconds over the 72-second time allowed.

Completing the 2014 Final in 15th, 16th, and 17th place were Katie Dinan, Leslie Burr Howard and Lucy Davis, respectively. Dinan (Wellington, Fla.) and Grant Road Partners LLC’s 13-year-old Selle Francais gelding, Nougat du Vallet, started the afternoon by jumping a beautiful clear that never looked in doubt in Monday’s first round. However, they, like Howard, lowered the first fence and the A element of the triple to complete an eight-fault trip in round two and finish on 25 faults overall.

Returning to Finals competition in Lyon was former World Cup champion Howard (Darian, Conn.) with Jane Clark’s talented 11-year-old Belgian Sport Horse stallion, Tic-Tac. In round one the pair had rails at the final two elements of the triple, fence eight, in addition to a single time fault. In round two they produced an eight-fault round after lowering the first fence and 5A to complete the week on an overall total of 27.

In her second World Cup Final appearance, Davis (San Francisco, Calif.) finished on an overall total of 29 with Old Oak Farms’ 10-year-old Belgian Warmblood gelding Barron. In round two, the pair was one of only five combinations to jump faultlessly to close out the week within the top 20.

Charlie Jacobs (Boston, Mass.) made his World Cup debut in Lyon with CMJ Sporthorse LLC’s Flaming Star and finished out the week in 20th place. On Monday, the 15-year-old Irish gelding jumped four- and 13-fault efforts to finish on an overall score of 42.

Germany’s Daniel Deusser claimed the 2014 Longines FEI World Cup Jumping Final title after an impressive week of jumping with Cornet D’Amour, finishing on an overall total of two faults. Finishing in second place was his compatriot Ludger Beerbaum, who utilized Chaman in the Speed Leg and Chiara 222 in legs one and two to finish on a four-fault total. Great Britain’s Scott Brash and Ursula XII finished on a five-fault total to collect third-place honors.