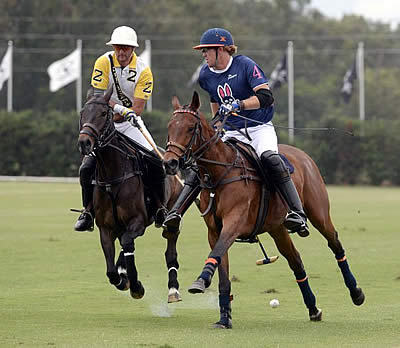 Kris Kampsen of Psycho Bunny and Gonzalo Tevez of Clearwater battle for the ball. Photos by Scott Fisher.

Kampsen was named the game’s Most Valuable Player.

The lanky 6-goal rated player led scoring with five goals and dominated both ends of the field including helping to stave off Clearwater’s sixth-chukker rally.

Hall added three goals. Seibert and Ganzi each had two goals. Ganzi scored the game-winner in the sixth chukker.

Clearwater, which mounted a comeback in the final chukker with three goals, got balanced scoring from Campbell, Tevez and Olivera, who each scored three goals. Aguero added one goal.

It was the first of six medium-goal tournaments that featured five teams in the field. The other teams were Ride To Shine, Palm Beach Polo and Power Horse.

During the Grand Champions’ spring season, amateur polo players will play with and against some of the world’s top pros.

Grand Champions, with its well-manicured fields and turnkey facility, expects to have its best spring season in the nine-year history of the club.

MAY 8-11: The USPA Eastern Challenge

WHERE: 13444 Southfields Road, on the corner of South Shore Boulevard and Lake Worth Road, Wellington, 33414.

INFORMATION: There are great field side views for tournament action at the home base of pro teams Audi and Flight Options. Everyone is welcome to watch high, medium and low goal polo in a relaxed atmosphere during the winter, spring and fall tournament season and other special events including International Cup in November, Buzz Welker Memorial Junior Tournament in March, ProKidz Tournaments in the spring and fall, Women’s Championship Tournament and Gay Polo League International Tournament, both in April.