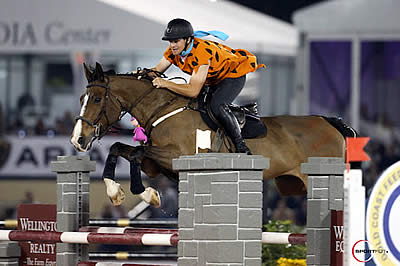 The 2017 GCC donated a record $1.5 million to 35 local Palm Beach County charities, bringing the eight-year total up to $10.7 million distributed through the event to date. The winning charity received the top prize of $150,000, with a sliding scale for the balance of the proceeds down to 35th place, which wins $15,000.

The competition is held as a pro-am team relay with each team made up of junior and amateur riders competing side by side with top professionals. The event also featured a fun theme, as riders (and their horses) dressed up as characters from their favorite animated movies.

Representing Urban Youth Impact, Sweetnam, Tomeu, and Chamblee rode for team sponsor Spy Coast & Preston, and corporate sponsor Equine Tack and Nutritionals dressed as characters from The Flintstones. All three riders cleared the course without fault and clocked the fastest combined time of 85.27 seconds for the win. Sweetnam and Tomeu were also part of the winning team in 2016, while Chamblee was competing in the event for the first time.

“It is a fantastic cause, not just for our team, but for a lot of different foundations in the area,” said Sweetnam, who anchored the team as professional rider. “I do not know if there is anything else like it in the country or anywhere really. Every year we try to do our best for whatever cause we are given. Obviously the girls did a great job, and I just finished it off. They were really motoring, so it was great.”

Tomeu (23), who has been competing in the event for the past four years, stated, “Every year we really try hard to win. We put together a good team, and last year we had a great team. We really wanted to step it up and do it again, and we did, which is amazing. We were even faster this year than we were last year, which I did not think was possible. Sedona was fantastic with her switch-off. It was really amazing.”

Chamblee (15) added, “This was my first year doing the Great Charity Challenge, and it was really fun. It was a great experience, and you get to ride for an amazing charity, which is really cool. Like Lindsey said, it was just amazing.”

Representing team sponsor Spy Coast Farm, Lisa Lourie commented on her team’s win for the second year in a row.

Team sponsor Monica Preston added, “I am so proud to be a part of this group, and it is really wonderful that a small charity can benefit so greatly. I am so proud of the riders, and thank you to Lisa for getting me involved in this event.”

Charity winner Urban Youth Impact’s mission is to love, equip, and empower inner-city youth and their parents to fulfill their God-given purpose. Representing the organization, volunteer Sarah Armada detailed, “It is an organization that provides a safe place for kids to go after school. They get reading support; they get the arts. There is African drumming and ballet. There are things that these children would not be otherwise exposed to. They do so much for the community, and I think this is a great way to get their name out there and just provide them with all of the resources that those kids so desperately need. This is going to make a huge difference.”

Armada continued, “It is all about building their capacity and letting the kids feel empowered and equipped so that they can go out and be successful in their community.”

Adopt a Family was the second wildcard draw of the night, and ended up in second place overall, with riders Sydney Shulman, Lilli Hymowitz, and Hannah Patten representing the charity. Team sponsor the Patten family and corporate sponsor H5 Stables supported the riders, dressed as characters from Lilo & Stitch, with a combined time of 94.02 seconds.

GCC co-founder Paige Bellissimo was thrilled with the success of the eighth annual event and praised everyone involved on a fantastic evening of sport and charitable giving.

“It is really special year after year to have so many great riders participating in the event,” Bellissimo stated. “It is amazing that people donate their time to give back. The executive directors of all of the charity organizations are the lifeblood of these communities, and it is just really amazing that we can all come together to support the community and see it grow. I want to thank the riders and the sponsors. Thank you Lisa and Monica for supporting year after year. It is so cool to see the charities and everyone’s unique way of helping. Urban Youth Impact is empowering our youth, and the youth are our future, so thanks go to them for everything they do.”

Sherkan d’Amaury, an 11-year-old Selle Francais gelding (Kannan x Quick Star) owned by Farrington, Haity McNerney, and Daniel Crown, carried his rider to victory in a time of 39.54 seconds over the short course. Shane Sweetnam (IRL) took second and third place honors, riding the Blue Buckle Group’s Cobolt through the timers in 39.92 seconds, and stopping the clock in 40.56 seconds aboard Sweet Oak Farm and Seabrook LLC’s Main Road. Canada’s Beth Underhill finished fourth, riding Sandy Lupton’s Count Me In to a clear round over the jump-off track in 40.59 seconds.

Remarking on his winning round with Sherkan d’Amaury, Farrington stated, “For him, I just did what I thought his strengths were. I think what won the class today was the leave-out to the last fence. He has a very big stride and big scope, and he is so careful that he is actually better if I am catching every jump accelerating, or out of rhythm. I think that is where we got it today.

“I think a lot of this horse,” Farrington continued. “I had him last year, and then he had a terrible colic surgery, and he just started showing this winter two weeks ago. The first class in the week he was third, and then yesterday he was second, and today he won, so he is really on the mend and I’m happy to have him back.”

Sherkan d’Amaury has a fast pace and a unique way of going that suits Farrington’s strengths as a rider.

“He is my style. He is super careful, which I try to find in all of the horses I buy,” Farrington stated. “I try to get extreme quality, and sometimes that works against me, but in the end I think that is the way you get the best horses. They tend to be a little bit the weirdos. They are spooky and not always the easiest to ride, but that often goes hand-in-hand with an extreme horse that has that kind of blood and that kind of carefulness. It is a double-edged sword, but that is what I like to ride.”

Sherkan d’Amaury is just getting back in top form and Farrington will continue developing him throughout the winter circuit.

“I think he can jump anything,” the rider noted. “It is just a matter of building him the right way, and seeing where his confidence is, and what his body is ready for. He came off of a long gap there not doing anything all last year, so we’ll see where he goes. It is a long winter and we have lots of time to build him up, so I am looking forward to it.”

The Beval Palm Beach Adult Medal concluded Saturday morning with Catie Staszak of Boynton Beach, FL emerging as the winner. Staszak shows in the Adult Amateur Medals while also focusing on her career as a multimedia sports journalist. All 11 competitors participated in a jumping and a flat phase.

“Flatwork has typically been my weakness,” Staszak detailed. “The jumping phase felt phenomenal. Everything worked out well and was smooth, which is key. It wasn’t the most technical course, so it was really about position and keeping on a nice rhythm.”

Staszak was aboard Agnes Augusta, a 12-year-old Swedish Warmblood mare owned by East Wind Farm, LLC. The pair has been partnered together for about four years.

“We just click,” Staszak explained. “She’s really sensitive, and I’m a very soft rider so we get along well. She’s come so far, especially in the past year. I couldn’t be prouder of her. She’s really special, and I love her to death.”

Staszak rode in the equitation classes as a junior, but took a break from showing to get her degree in broadcast journalism at the University of Miami. She does grand prix commentary for live streaming events, which combines for a career of two of her passions – horses and journalism.

The fourth week of WEF concludes on Sunday with the $216,000 Ariat® Grand Prix CSI 4* on the grass derby field at Equestrian Village. The Bruno DelGrange Large Junior Hunter 16-17 division will award championship and reserve honors in the Rost Arena. For full results, please visit www.PBIEC.com.