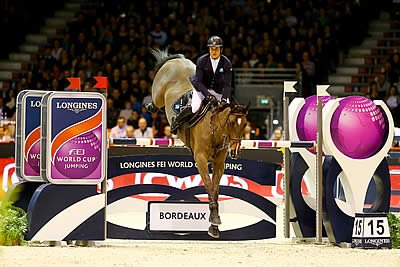 Bordeaux (FRA), 4 February 2017 – Frenchman Julien Epaillard took even himself by surprise when galloping to victory with Quatrin de la Roque at the penultimate leg of the Longines FEI World Cup™ Jumping 2016/2017 Western European League on home ground in Bordeaux, France. “I didn’t come here with big expectations,” said the delighted 39-year-old from Normandy, after out-pacing and out-jumping the stellar field of 39 starters in another marathon jump-off against the clock.

It seems even the top course designers are astonished by the ability of the horses and riders on the indoor circuit this winter, as 19 managed to complete Uliano Vezzani’s first-round track without incident. “What can I say? It’s a big arena and the horses jumped great – that’s the sport!” said the world-famous Italian course designer.

It was Rio Olympian, van Asten, who set the jump-off target when second to go and clear in 37.71 seconds, and although Frenchman Aldrick Cheronnet (Tanael des Bonnes) and Germany’s Markus Brinkmann (Pikeur Dylon) were also fault-free it wasn’t until Klatte took his turn that the Dutchman’s time looked vulnerable. Klatte steered a shorter route when cutting inside the first fence after tackling the double at the halfway point, stopping the clock in 38.09 seconds, but two horses later Epaillard and his 13-year-old gelding did the same to break the beam in what would turn out to be the winning time of 35.92 seconds.

The superstars who followed him into the ring often faulted at the vertical that followed that inside turn, or sometimes even earlier, on the rollback to the vertical third fence on the new course. Lynch was never likely to beat the target time with his massive 14-year-old gelding, but 38.41 seconds would be plenty good enough for fourth spot when the remaining six contenders all left poles on the floor.

“Things have not been going great for me, and after La Coruna (early December) I felt my horse was tired so I gave him a little break,” said Epaillard as the result began to sink in. “Then we started again in Oliva (ESP) and came here, but I was only really preparing for the Grand Prix tomorrow, I wasn’t expecting this to happen!” he added.

Gothenburg in Sweden will host the last leg of the Western European League in three weeks’ time.

Julien Epaillard FRA (1st): “My horse has a very big stride and we had a good turn to the vertical after fence two and had a nice distance to the last jump. With this horse I have only won at 3-Star level – the Grand Prix at Lummen and at Paderborn.”

Leopold van Asten NED (2nd) (when asked why he was two seconds slower than the winner): “I was second to go in the jump-off and had to make a choice. I wanted to be quick but not to take too many risks because wanted to be clear. Even if I started last I wouldn’t have beaten Julien’s time anyway!”

Guido Klatte GER (3rd): “I’m really happy; I can’t believe it! This is the best atmosphere I’ve seen at an indoor show, even better than in Germany!”

Mr Eric Dulong, President of the Organising Committee, Jumping International de Bordeaux: “It’s great to have such a fantastic audience and such a great atmosphere. I want to thank everyone at event – Bordeaux is becoming one of the shows you just have to be at in Europe!”