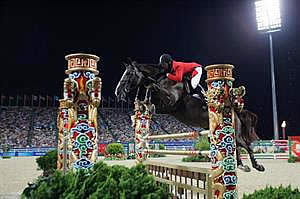 McLain Ward and Sapphire at the 2008 Olympic Games (Bob Langrish)

Lexington, Ky. – The United States Equestrian Federation mourns the loss of the great show jumping mare Sapphire who died on June 22, 2014 following complications from colic. With longtime rider McLain Ward, the 1995 Belgian Warmblood mare was a stalwart of U.S. Jumping Teams for years helping the United States to capture Team Gold at the 2004 and 2008 Olympic Games and Team Silver at the 2006 FEI World Equestrian Games.

“Sapphire epitomized a great mare, and if you have a great mare, you have a great horse,” remembered legendary horseman and former U.S. Show Jumping Chef d’Equipe George Morris. “She was the anchor of so many U.S. teams; she had the scope, she was careful – I can’t say enough good things about her. She was one of the greatest horses of the century.”

A tribute to Sapphire following her retirement in May 2012.

“Our entire Castle Hill family and every person she has touched has lost a great friend. Thank you Sara not just for all the dreams you made come true but simply for being who you were,” said Ward. “You always will be my champion in every way. Godspeed, good friend.”

2 July 2010 – After a full investigation into the facts surrounding the disqualification of Sapphire (McLain Ward) at the FEI World Cup Final in Geneva, the FEI has determined that the horse was incorrectly eliminated from the second round on 16 April 2010, however, Sapphire’s disqualification from the final round of the World Cup remains in place.

As a result of this investigation, the FEI has also decided to issue mandatory guidelines to be applied by the Veterinary Commissions appointed for FEI Events in order to strengthen the hypersensitivity protocol that was applied in Geneva. These guidelines will be communicated to all National Federations prior to the CHIO in Aachen (GER).

The USEF, McLain Ward and Tim Ober have stated that they do not agree with the FEI on the question of whether Sapphire displayed a level of sensitivity that justified her disqualification from the third round of the World Cup and also disagree with the process followed however, in the best interest of the sport, they have dropped their legal case against the FEI and will not challenge this disqualification.